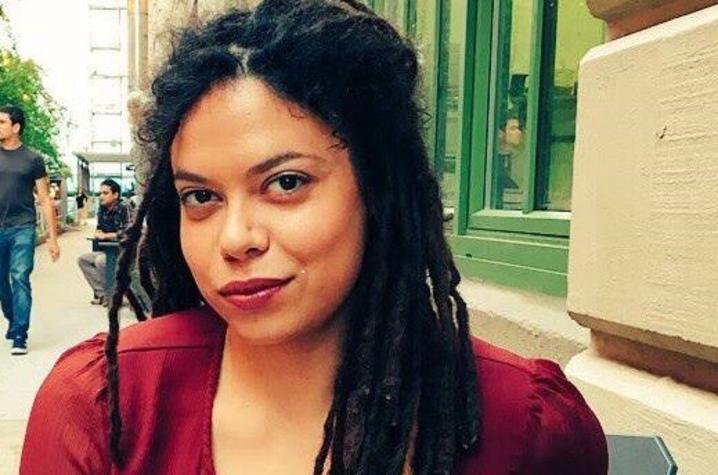 LEXINGTON, KY. (Jan. 12, 2022) — There is a long tradition of journalists turned creative writers, and one University of Kentucky College of Communication and Information alumna is continuing down the same path with great success.

Joy Priest, a 2012 journalism graduate, had dreamed of being an author since she was a girl. In 2019, she accomplished that dream by publishing “Horsepower,” her first collection of poems. But she hasn’t stopped there in her pursuit to cement her spot in Kentucky’s literary legacy.

“There is an incredible literary history in Kentucky,” Priest said. “As much as people talk about basketball and horse racing and bourbon, there should be talk about literary writers in Kentucky because that’s how big of a legacy there is.”

Among her numerous awards and fellowships, Priest is the recipient of the 2021 National Endowment for the Arts Fellowship, the 2020-25 Inprint MD Anderson Foundation Fellowship, the 2019 Donald Hall Prize for Poetry, the 2018 Gregory Pardlo Scholar at The Robert Frost Place, the 2016 College Writers’ Award for the Zora Neale Hurston/Richard Wright Foundation and the 2015 Emerging Artist Award from the Kentucky Arts Council.

Although she has found her place in the poetic world, Priest did not originally plan on being a professional poet nor did she know that was even a viable career. As a girl, she was a sporty, “undercover nerd” who tried to imitate the fiction and nonfiction books she read. Her earliest memory of writing was when her first-grade teacher assigned her to write a short story, presumably because she had already been distracted by writing in class. Even so, Priest can’t recall how she got into poetry as she doesn’t remember reading it much.

When Priest came to UK on a full academic scholarship, her affinity for writing did not immediately translate to a literary major. She went through agricultural biotechnology, pre-med, human nutrition and being vice president of Minorities in Agriculture, Natural Resources and Related Sciences (MANRRS), housed in the UK College of Agriculture, Food and Environment, before settling with journalism.

Through journalism, not only did Priest’s expectations for others’ writing grow due to her own training but she also joined two organizations that introduced her to her poetry mentors. As president of the National Association of Black Journalists, one of her advisors was Frank X Walker, Kentucky’s 2013-15 poet laureate. And as the Kentucky Kernel’s features editor, she met Nikky Finney and covered her win for the 2011 National Book Award. After Walker read Priest’s creative writing, he suggested she take workshops. She then spent her senior year at UK being formally trained in the literary craft and introduced to regional literature, even joining the esteemed Affrilachian Poets.

“Joy was already a good writer when she found her way into my classroom,” Walker said. “Her fearlessness on the page raised the bar for her peers. Some of the work in her new collection was born in that class. There was a reason my writing collective invited her to join the Affrilachian Poets. I’m happy the rest of the world is discovering her too.”

After UK, Priest continued her education by following Finney to the University of South Carolina. She received her Master of Fine Arts in creative writing and certificate in women and gender studies while also continuing her focus on Black narratives and underrepresented youth. Having been a Black, underrepresented youth herself, Priest’s work takes inspiration from her own journey of using art and education to work her way out of working-class Louisville.

“Thus far my training has been very Black, very Black fem, very Black woman,” Priest said. “I think the nature of my academic trajectory has just been shaped that way. There’s a degree of intentionality behind it because that’s what I’m interested in. I gravitated to those subjects and those teachers and those classes because through them I learned to articulate my specific subject position in the world. That’s where my academic expertise comes from thus far.”

At the conclusion of her MFA, Priest’s life experience as a writer culminated into “Horsepower,” what she calls a “quintessential first book but a nontraditional bildungsroman, coming of age, story.” The poetry collection is a cinematic escape narrative that follows a Black, southern working-class girl as she grows up vigilant in a white supremacist household where she’s being kept from her Black father. Though Priest was working against those things in her own life at the time of writing her poems, her book is not autobiographical. Moving forward, she plans on using more mature craft and creatively imaginative approaches that won’t be easily confused with her own life story.

Though Priest’s writing has won her national recognition, praise from her community has been most important to her. From acknowledgment by Great Friendship Baptist Church in West Louisville to receiving a book blurb from Pulitzer-winning Black poet Gregory Pardlo, Priest places these accomplishments above any other revered awards she has earned.

“I care a lot about acknowledgment from my community, that I’m doing a good job on behalf of Black folks, to be quite honest,” Priest said. “It’s those experiences that you feel like you matter as a writer to a community and you’re not just like a diversity photo-op. Those things matter to me. Kentucky matters to me. Being acknowledged in Kentucky, which honestly has been a bit of a struggle. It’s really cliché by now but you know, ‘Started from the bottom, now we here,’ like that community acknowledgment, it means something.”

Priest is currently pursuing her Ph.D. in literature and creative writing from the University of Houston and is expected to graduate in 2025. She has an untitled, forthcoming second book scheduled for publication in 2023.

If you would like to read Priest’s work, visit www.joypriest.com/.