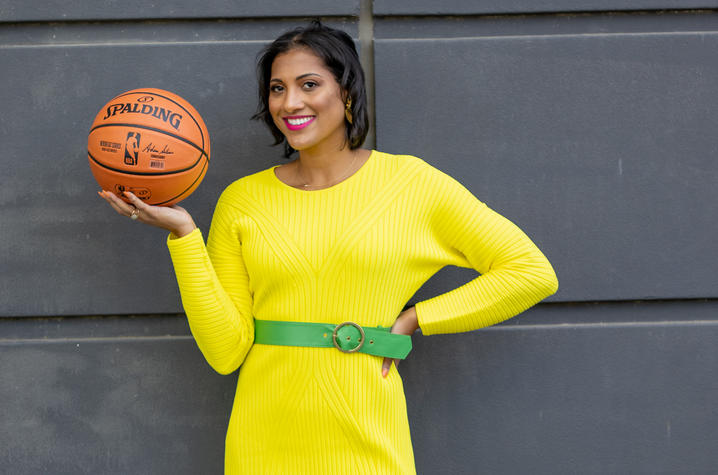 LEXINGTON, Ky. (June 30, 2022) — From playing with the pros to working for the pros, one University of Kentucky College of Communication and Information alumna is proving that her leaving the court doesn’t mean she’s leaving sports.

Nicole Britenriker, a 2010 integrated strategic communication graduate, came to UK to play collegiate volleyball and has graduated onto working in the professional sports realm. While she’s currently serving as a senior team talent advisor for the NBA, the road there didn’t always come as naturally as her athleticism.

From the age of 5, Britenriker was absorbed by sports. She participated in just about everything: T-ball, soccer, gymnastics, tap dance, swim, softball, volleyball, basketball and track and field. And she didn’t just play — she dominated. From competing in the Junior League Softball World Series in middle school to getting recruited by Division I volleyball teams in high school, Britenriker’s affinity for sports grew right alongside her.

“I was an athlete and blessed with athletic abilities that I was able to leverage across the board,” Britenriker said. “Sports were ingrained in me at every aspect, seasonally. So with just my love of being involved in sports, I didn’t know what it was going to be but I knew that when I got done with school and graduated that I wanted to be associated with sports and athletics with my career in some way.”

After transferring to UK for her junior year, she began both her journey as a Wildcat volleyball player and an ISC major. While she knew what her player’s career would look like, peppered with national tournaments and time as an international professional, she knew less what her future career would be other than it would involve marketing and communications.

Despite having played as a pro, it took Britenriker a year of hustling and making ends meet to finally get her foot in the door working for the pros.

For her first full-time job out of college, Britenriker got the opportunity to work with the Cincinnati Bengals. It was a dream job for her since that was her hometown team. There, she became acquainted with sales, working as a seasonal ticket sales representative, a ticket sales executive and a premium seating account executive over her three-year tenure.

She then decided to pivot in sports sales by leaving tickets and instead going the sponsorship route. Through Learfield IMG College, Rupp Arena’s exclusive venue-media rights holder, Britenriker was reacquainted with UK and basketball. She spent over three years working in sales, first selling corporate sponsorships and then planning national sales. Making yet another pivot, Britenriker transitioned to Learfield’s human resources side. There she finished her seven-year tenure by managing talent acquisition and serving as the co-chair for the Diversity, Equity and Inclusion Task Force.

When it came time for Britenriker to join the NBA, it was a natural progression that she was more than ready to take on.

“When I set out on this sports career of mine, when I was still sitting at CATS (UK’s Center for Academic and Tutorial Services, where student-athletes can obtain academic support) at UK’s study table, working at a professional league office was a career goal,” Britenriker said. “To achieve that, with the NBA being the pinnacle place of preference, it’s obviously a bit of a career goal life achievement there. So, I was super thrilled and happy and once again on cloud nine in another time of my career.”

As a senior team talent advisor, Britenriker serves as an overarching HR consultant to the HR departments of all 30 NBA teams, including the occasional WNBA team and NBA G League. Her job is all about talent management, retention and development, helping to ensure the NBA’s employees are always putting their best feet forward. She also leads the early- and mid-career talent acquisition programs from the recruitment standpoint.

Although she’s only been with the NBA for a little over a year, Britenriker calls her experience with the organization a breath of fresh air. From being a leader in social responsibility to championing a diverse work environment, the NBA has more than lived up to Britenriker’s expectations. She says the support she has been given is empowering her to lead and drive her career further than ever before.

“Just being in the room with an international, global brand and knowing the significance of our work on and off the court,” Britenriker said, “sometimes I have to pinch myself.”