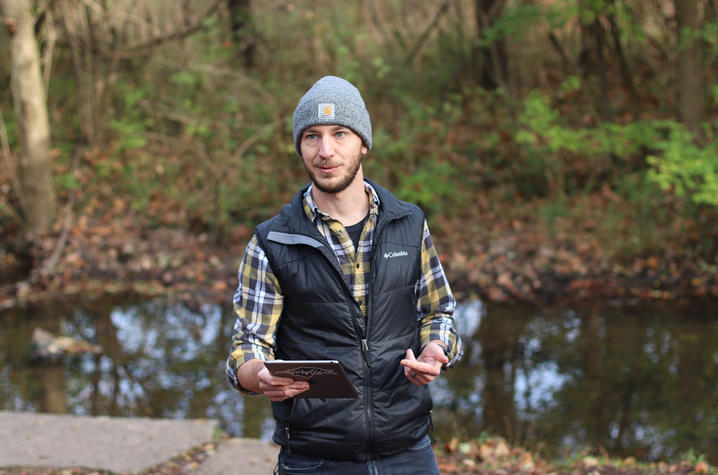 LEXINGTON, Ky. (Jan. 14, 2022) — After successfully building one of the best hunter and angler focused social apps on the market, one University of Kentucky College of Communication and Information alumnus is looking to also help build up his community.

Brad Luttrell, a 2009 journalism graduate, is the co-founder and CEO of GoWild, a free social media community helping outdoor enthusiasts improve their skills, discover gear and earn rewards. Founded in 2016, the forum-based app connects community members to locals who are interested in the same topics instead of requiring members to build their own following.

What sets GoWild apart from its competitors is its focus on gear. There are 500,000 pieces of gear users can tag in their content to show what they’re using and about 30,000 pieces of gear users can purchase directly from GoWild, which includes about 40 brands. The app also rewards users with points that unlock different prizes as they buy products and make posts. Prizes include GoWild swag, coupons, gift cards and a free fishing trip with the company founders, which has yet to be won. Luttrell views the investment as earning his customers’ business and investing back into them.

“Building a tech company in Kentucky, I have been told, is like growing a pineapple in the Midwest,” Luttrell said. “And the Midwest is not a conducive growing environment for pineapples, which is something we hope to change.”

The idea for starting a tech company came after Luttrell returned to his childhood, southeastern Kentucky roots of hunting and fishing after a hiatus to come to UK. He had spent his college years squarely devoted to writing, editing and shooting photos for the Kentucky Kernel, putting in upward of 90 hours a week managing a staff of 40 for the student newspaper. After earning his degree, he worked for a couple of years as a freelance photographer, an advertising copywriter and a creative director. When he met his goal of becoming a creative director before turning 30, he made a new goal.

As he tried to think of a company to start that would fast-track his career while also trying to improve at whitetail deer hunting, he found that there wasn’t a good online space for veteran hunters and rookies alike to connect, swap advice and share hunting experiences. And after facing “hunter harassment” for sharing his past game on other social media sites, he set his sights on creating a space for the outdoorsy community.

“The fact that you might be afraid to share something that you care so much about is crazy to me,” Luttrell said. “I just had this simultaneous realization that there should be a niche platform where you can quickly meet other people and dialogue with them around the thing you love.”

Combining his diverse skill set with his talent for storytelling, Luttrell built a company — with no prior startup experience — from the ground up with three other founders. For the first two years, the founders met in their basements and living rooms on holidays, early mornings and late nights, using all their free time to set the foundation for the company. In 2017, they started fundraising. By the next year, Luttrell was able to go full time with GoWild, and he credits his time with CI for developing the tools he needs for success.

“My ability to storytell that I learned from the Kernel and the University of Kentucky is the single most important skill set I’ve ever learned,” Luttrell said. “When I made the jump into being an entrepreneur, the best thing to do to raise money is to be honest, tell an authentic story and get people to believe in you.”

The app has been gaining a lot of traction in the past year. Last January, GearJunkie, a trusted business in the outdoor industry, named GoWild the Best Hunting Social Media App of the Year. Luttrell said the title was exciting as he felt the outdoor media had snubbed his business for a while. In April, GoWild was also featured on Fox News Media’s homepage, and in December, Louisville Business First named GoWild as one of the Startups to Watch in 2022.

Luttrell’s startup success with GoWild led to him being named to Louisville Business First’s Forty Under 40 Class of 2021. Not only was the honor important to him because it recognized his team’s hard work over the years, but he felt it also legitimized the often-questioned hunting industry among a diverse class of companies including distilleries and health care.

Moving forward, Luttrell hopes to scale GoWild into a profitable business that lasts and can stand its own against other social media apps. He wants the app to continue to be a safe, fun and useful space for everyone passionate about wildlife conservation. His goals also include helping other founders, especially those in the South and Midwest, to reach the level of success he’s managed to achieve so far with GoWild.

“We are making such an impact,” Luttrell said. “Yes, it’s smaller scale right now, but I don’t want that to stop. I think if we end tomorrow, there’s a black hole on the internet that doesn’t exist in the way that we do. It’s such an important community to so many people. I just want to be able to feed them the entertainment and education that they found in our platform and continue to keep it alive.”