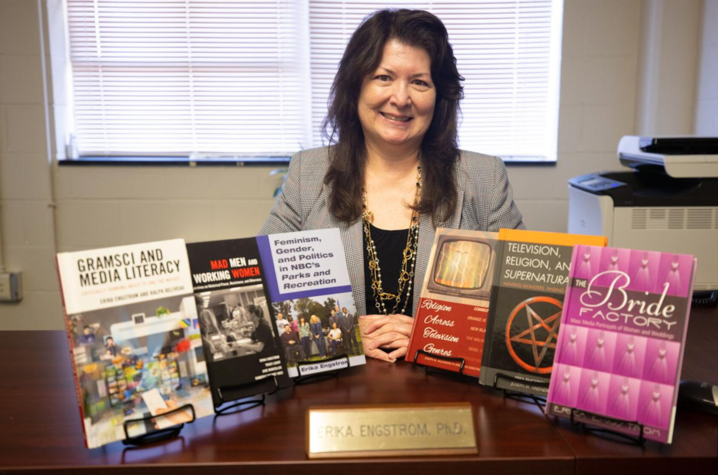 LEXINGTON, Ky. (Sept. 29, 2021) — How do Hollywood clichés perpetuate the status quo? Erika Engstrom, media content expert and director of the School of Journalism and Media in the University of Kentucky College of Communication and Information, explores this question in her new book “Gramsci and Media Literacy: Critically Thinking about TV and the Movies.”

In this compelling analysis, Engstrom and co-author Ralph Beliveau, of the University of Oklahoma, compare case studies of movies and television shows that actively challenge societal stereotypes — or in Engstrom’s words, media that is “counter-hegemonic.”

“Hegemony” is the dominant world view of most participants in society. This theory, first employed by Italian philosopher Antonio Gramsci in his critiques of capitalism, suggests that most of what we see is created by people in power with self-serving interests. To keep said power, hegemonic actors reinforce the status quo and suppress resistive voices.

In entertainment media, hegemony is personified as overused character tropes: the damsel in distress, the wise old man, the girl next door, the stoic muscleman and more.

“That’s why people get marginalized,” Engstrom said. “The people who make the movies and TV want you to keep watching. If there is something that seems a little unusual or out of the ordinary, you won’t want to watch.”

However, Engstrom and movie critics alike sense a subtle shift in the industry. Thanks to streaming services, resistive stories have slowly gained popularity, influencing even big-box films like “Avengers: Endgame” — a case study in this book.

Unlike other films in the Marvel cinematic universe, Engstrom thought “Endgame” was a terrific movie. Characters like Tony Stark, who were previously portrayed as hyper-masculinized and one-dimensional are now seen crying, going to support groups and contributing to their households.

“They’re showing real men being people; it’s counter-hegemonic masculinity,” Engstrom said. "Resistive media does more than diversify stories on the big screen, it contributes to the evolution of our culture. Normalizing human emotions can change society and our relationships with others in our everyday life."

Although “Avengers: Endgame” does challenge society’s traditional view of masculinity, it is still hegemonic in some ways, especially in its portrayal of women. Therefore, Engstrom argues, all consumers of media must watch with a critical eye and question the media they love. To watch critically, Engstrom says, is to understand that you have a choice to do whatever it is you want to do.

“That is what this book is about — let’s question what we know so that we can resist the hegemony,” Engstrom said. “That’s kind of my purpose on this earth, to make (people) understand that this is for the good of everybody.”

For more information on “Gramsci and Media Literacy: Critically Thinking about TV and the Movies,” visit Rowman & Littlefield. The book is also available for purchase on Amazon and Barnes & Noble.

Erika Engstrom is a nationally known gender and media scholar, with specialties in studying the portrayal of gender, religion and weddings in mass media. Before joining UK in 2020, Engstrom served as a professor of communication studies at the University of Nevada, Las Vegas, as well as the acting general manager of the campus radio station KUNV-FM.

The University of Kentucky School of Journalism and Media was founded in 1914. As one of only 114 fully accredited journalism schools in the world, UK JAM leads the way in training students for success in any media field, with emphasis on hands-on application.