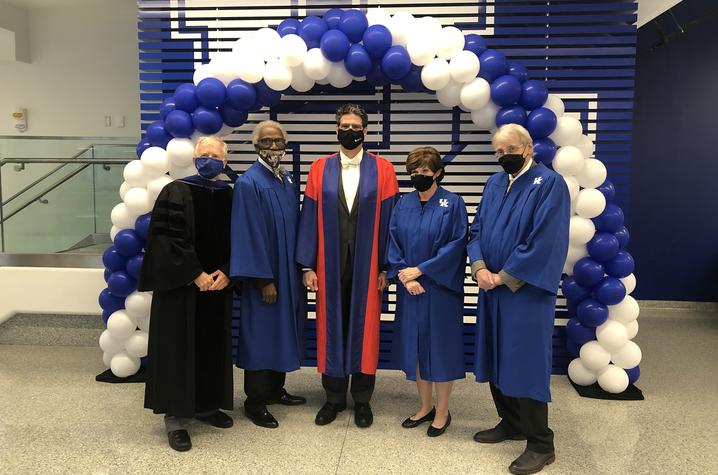 LEXINGTON, Ky. (Oct. 18, 2021) — Three alumni and one faculty member were inducted into the University of Kentucky College of Arts and Sciences Hall of Fame at a ceremony on campus this past Friday.

Now in its 22nd year, the hall of fame recognizes College of Arts and Sciences alumni and faculty who have made meaningful contributions to the university, the Commonwealth and the nation in their respective fields.

“The Arts and Sciences Hall of Fame honorees’ life stories reflect the power, the breadth, the longevity and the purposefulness of a liberal arts education," said Christian Brady, interim dean of the college. "This year’s inductees’ lives have enriched our community and our nation, and it was an honor to celebrate their achievements."

Barbara Bailey Cowden is a native of Harlan, Kentucky, started out as a performance piano major at UK, but a summer job changed her course, and she earned a bachelor of general studies degree in 1977. Her first job in journalism was as a staff reporter for her hometown newspaper, The Harlan Daily Enterprise. Under the guidance of then Enterprise editor, Ewell Balltrip, she discovered her passion for journalism. After her first byline in the newspaper, she knew that she had found her desired career path.

Cowden welcomes the opportunity to get back on campus when she can, speaking to journalism classes and meeting with students. Along the way, Cowden also taught journalism at UK and Asbury University.

She began working at WKYT in 1979, never realizing it would be a career of more than 40 years. She co-anchored the consistently No. 1 rated newscast with John Lindgren, Sam Dick and Bill Bryant. During her tenure at WKYT, Cowden worked as a reporter, anchor, producer and weather person in nearly every time slot. She worked early mornings, late nights, weekends and dayside.

Gurney Norman’s relationship with the College of Arts and Sciences spans 66 years, from 1955 when he enrolled at UK as a freshman to Fall 2021 as he begins his 42nd year teaching creative writing in the Department of English.

Norman grew up in the southern Appalachian Mountains, raised alternately by paternal and maternal grandparents. From 9 to 18, he attended Stuart Robinson School, a Presbyterian boarding school in the coalfields of Eastern Kentucky. At Stuart Robinson, he developed an interest in writing. He enrolled at UK with an interest in journalism. In creative writing classes, he was mentored by professors Hollis Summers and Robert Hazel and formed lifelong friendships with Kentucky writers Wendell Berry, James Baker Hall, Ed McClanahan and Bobbie Ann Mason. He also wrote for the Kentucky Kernel, published short stories in the English department’s literary journal Stylus and helped edit The Kentuckian yearbook. He was in ROTC and later spent two years in the U.S. Army.

In 1960, Norman received a Wallace Stegner Fellowship in Creative Writing at Stanford University, where he studied with critic Malcolm Cowley and renowned Irish short story writer Frank O’Connor. He joined a writing class with Ken Kesey, Larry McMurtry, Peter Beagle, James Baker Hall and other young writers. After military service, 1961-1963, Norman returned to Eastern Kentucky and worked as a reporter for his hometown newspaper, The Hazard Herald. In the summers of 1966 and 1967, he was a lookout for the U.S. Forest Service in Oregon’s Cascade Mountains. In 1972, his novel “Divine Right’s Trip” was published by the Dial Press. In 1977, his book of short stories, “Kinfolks,” was published by Gnomon Press. He returned to Kentucky to join the English faculty at UK in the fall of 1979.

In the 1980s, Norman wrote and narrated three documentaries on Kentucky and the Appalachian region for Kentucky Educational Television. In 2011, he published a novella, “Ancient Creek: A Folktale” (Old Cove Press). In 2020, his book of autobiographical stories, “Allegiance,” was published by Old Cove Press and distributed by Ohio University Press. Norman served as Kentucky Poet Laureate in 2009-2010. In 2019, he was inducted into the Kentucky Writers Hall of Fame.

William H. Turner, Ph.D., the fifth of 10 children, was born in 1946 in the coal town of Lynch, Kentucky, in Harlan County. His grandfathers, father, four uncles and older brother were coal miners. He earned a bachelor’s degree in sociology from UK and a doctorate in sociology from the University of Notre Dame. In addition, he attended the Foreign Affairs Scholars Program at Howard University and did postdoctoral work at the University of Pennsylvania and Duke University.

During his academic career, Turner served as chair of the Department of Social Sciences at Winston-Salem State University; dean of Arts and Sciences and interim president at Kentucky State University; vice president for multicultural affairs at UK; and distinguished professor of Appalachian Studies and regional ambassador at Berea College. When he retired in late 2017, Turner was research scientist leader at the Prairie View A&M University College of Agriculture and Human Sciences, where he led the collection and analysis of data on underserved Texans.

Turner has spent his professional career studying and working on behalf of marginalized communities, helping them create opportunities in the larger world while not abandoning their important cultural ties. He is best-known for his ground-breaking research on African American communities in Appalachia. As an academic and a consultant, he has studied economic systems and social structures in the urban South and burgeoning Latino communities in the Southwest. He co-edited the textbook Blacks in Appalachia and thematic essays on Black Appalachians in the Encyclopedia of Southern Culture and the Encyclopedia of Appalachia, and he worked as a research associate (1979–1991) to "Roots" author Alex Haley.

Turner was inducted into the Kentucky Civil Rights Hall of Fame in 2007, and the Appalachian Studies Association honored Turner for a lifetime of service to the Appalachian region.

Paul Eakin was born in New Orleans in 1942 and grew up in central Louisiana. He attended Louisiana State University, where he earned a B.S. in 1964 and a Ph.D. in 1968, both in mathematics. Following a postdoctoral year at the University of Rochester, he joined the UK math department in 1969 and spent the 1970s on teaching, research and working with graduate students in mathematics.

He became chair in 1980; in that role, he saw that the math department had a statewide responsibility to support Kentucky mathematics teachers. Since Kentucky had hundreds of math teachers (spread all over the state) and, at that time, only 55 UK math faculty (all in Lexington with all their other duties), he decided to form partnerships with other institutions. To those institutions, UK could bring new materials, new technology, project coordination and the capacity to raise and manage the financial resources required to apply them. As a result, Eakin helped to form numerous regional, statewide and multistate K-12/college partnerships that support STEM education. The largest, the Appalachian Math Science Partnership (AMSP), involved four states and was funded by UK’s largest external grant at that time.

Two decades later, the instructional research laboratory established to develop mathematics instructional technology continues as the UK math department’s “Mathskeller” instructional lab. The technology component of the AMSP lives on in the Kentucky KYOTE (Kentucky Online Testing) program. The latter is operated daily by more than a thousand Kentucky math and English teachers. Schools use it for college and dual credit placement, and it affords Kentucky seniors the opportunity to avoid college remedial work by establishing college readiness in mathematics, reading and composition.

This year's honorees join more than 60 alumni and 20 faculty members who were previously inducted. More information about each inductee, including full bios, can be read at www.as.uky.edu/halloffame.

A recording of the ceremony may be watched at https://youtu.be/w4x6aR5FCMA.