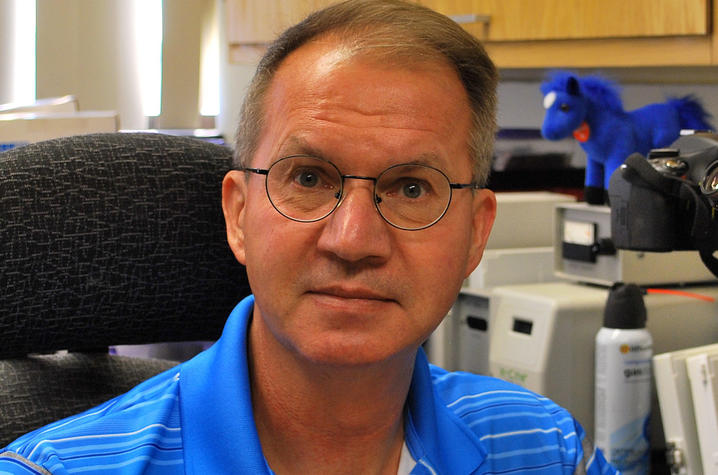 LEXINGTON, Ky. (Oct. 27, 2017) ― Cortland Eble, a geologist with the Kentucky Geological Survey, has received the prestigious Cady Award by the Energy Geology Division of the Geological Society of America (GSA).

The Cady Award is given to scientists who have made outstanding contributions to the study of the origin, occurrence and geologic characteristics of coal and associated rocks, including their economic implications. It was named for the respected coal researcher Gilbert H. Cady, who worked with the Illinois State Geological Survey for 60 years.

Eble, of KGS’s Energy and Minerals Section, has been at KGS since 1990, analyzing coal beds and organic-rich petroleum source rocks, and studying coalbed methane. He is also a palynologist, studying fossil spores and plant pollen in coal. Palynology helps scientists determine the conditions in ancient wetlands where coal formed.

Jim Hower, a coal geologist at UK’s Center for Applied Energy Research and previous recipient of the award, nominated Eble. In his letter of recommendation, Hower wrote, “While he conducts research on coal and shale organic petrology and on aspects of peat depositional environments, he is probably best known as the leading Paleozoic palynologist in North America and, arguably, the world. … In addition to his sharing his time and expertise with students and research peers, he has not neglected his family and friends in building his career.” Hower also noted Eble’s research connections in a number of European countries.

Letters of recommendation also came from researchers at Trinity College in Ireland, several universities in the United States and the Smithsonian National Museum of Natural History.

Steve Greb, who has worked with Eble for many years at KGS, said, “Cortland has long deserved this recognition for his outstanding research in coal geology.”

Before joining KGS, Eble was a National Research Council post-doctoral researcher at the U.S. Geological Survey in Reston, Virginia. He earned a doctoral degree in geology from West Virginia University. He oversees a coal-quality database available through the KGS website.