Based on the best-selling memoir, "A Journal for Jordan" tells UK alumna Dana Canedy's true story of love beyond words.

LEXINGTON, Ky. (Dec. 23, 2021) — One University of Kentucky College of Communication and Information alumna’s book is heading to the big screen.

Dana Canedy’s New York Times best-selling memoir “A Journal for Jordan,” has been adapted into a feature film. Canedy is a graduate of the UK School of Journalism and Media.

Directed by Denzel Washington and starring Michael B. Jordan, “A Journal for Jordan” focuses on Canedy’s real-life story with her war-hero partner, 1st Sgt. Charles Monroe King (played by Michael B. Jordan), and the journal of love and advice he left for their infant son before being killed in combat in Iraq.

Before being slated for a feature film, "A Journal for Jordan" was published in 10 countries and eight languages.

“It is truly a blessing to be able to use my platform to tell not only the story of my solider, but the story of military sacrifice,” Canedy said. “A solider never serves alone, their family is always serving with them.”

Canedy had a huge part in bringing her book to life.

“Not only am I a producer on the movie, but I worked very closely with our amazing director, Denzel Washington. He had me involved in every step, from script development to casting,” Canedy said. “I also spent a lot of time with the actors, showing them Charles' dog tags and purple heart, to help them understand the story was about real people, not just characters in a script.”

Canedy says the film focuses on the idea of resilience after tragedy, but still has some humor in it. The film was privately screened to Canedy and her son Jordan before anyone else saw it.

“The film is so beautiful and very accurate. Because we got to know the actors and directors so well, they are like family now and it made it very personal,” Canedy said. ”I am so grateful for the way the film is being received and all of the support I have gotten. I hope families see it over Christmas and can resonate with the story.”

“A Journal for Jordan” is exclusively in theaters this Christmas. For more information about the film, or to purchase tickets, click here.

Raised in Radcliff, Kentucky, Canedy graduated from UK with a bachelor’s degree in journalism in 1988. She was named a Distinguished Alumna in the School of Journalism and Media in 2017, and was inducted into the UK Alumni Association's Hall of Distinguished Alumni in 2020.

“I’m so grateful to have attended UK,” Canedy said. “It provided me with the foundation I would need to succeed and I know I would not have gotten this far in my career without the instruction of my wonderful professors. I truly felt prepared to face the world when I left UK.”

Following her time at UK, Canedy worked at the Palm Beach Post in Florida reporting on law enforcement and crime, The Cleveland Plain covering law enforcement, suburban government and local business, and then as an editor directing metropolitan coverage before leaving in 1996 to work for The New York Times.

During her 20 years at the nation’s top newspaper, Canedy worked as a business reporter and three more as the Florida bureau chief, overseeing all news coverage from the state, including the 2001 election. She also was the lead writer and editor on The Times series, “How Race is Lived in America,” which won the 2001 Pulitzer Prize for national reporting. The series looked at race relations in this country.

In 2020, Canedy was named the first African American woman senior vice president and publisher of Simon & Schuster, one of the largest publishing houses in the world. Before her position at Simon & Schuster, she was named the administrator of the Pulitzer Prizes, working alongside the Pulitzer Prize board to select juries and prize deliberations and arranging the meetings that will select the yearly winners. 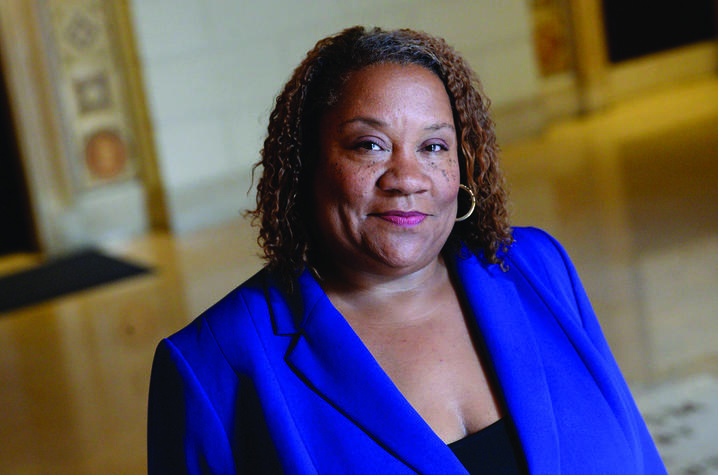