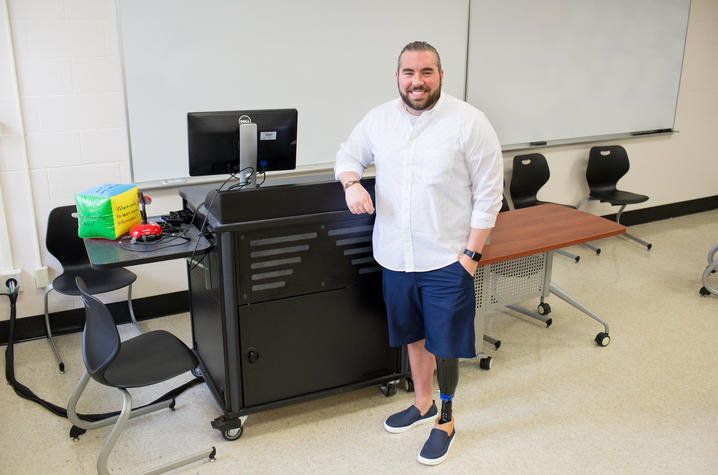 Bridenbaugh was recently awarded the UK Provost’s Award for Outstanding Teaching for his impact as a teaching assistant in the UK College of Education’s Department of Educational Policy Studies and Evaluation.

LEXINGTON, Ky. (June 5, 2017) — It was a normal day in southern Ohio. Hot, but normal. The Huntington Huntsmen football players were giving it their all during practice. It was the first time they were running plays with full contact, wearing all their gear. It might have been more enjoyable, if only it weren’t so hot.

The heat wasn’t on Sy Bridenbaugh’s mind as much as other things, though. Like showing he could be an asset. He was only a sophomore. Bigger, faster and more experienced guys were there.

He was from a sports-oriented family and, at age 16, was thrilled to be playing at the high school level. Everything about practice that day seemed normal, perhaps even mundane. But it wasn’t.

The scene is burned into Bridenbaugh’s memory and plays out in slow motion in the retelling of it. Dust lifted into the air as the players’ cleats dug into the dry ground, grasping for power and speed. Someone started having trouble with his equipment, so the coach asked for a replacement. Bridenbaugh jumped in. He saw it as an opportunity to prove his worth.

The whistle blew, and then it happened. A teammate to his left fell on Bridenbaugh, breaking two bones in his leg and dislocating his ankle. It was a gruesome break — so bad that Bridenbaugh seems to withhold the worst details in telling his story. But he admits a coach was holding one part of his leg, while another coach held the other.

After emergency surgery, all Bridenbaugh could think about was getting back to playing.

The leg break would be an obstacle to overcome, but not as much as what came next. Nobody saw it coming. How could anyone have guessed?

Bridenbaugh fell ill 48 hours after surgery. Rushed to a larger hospital in Columbus, Ohio, doctors removed his cast and automatically knew something was very wrong. The teen had contracted a flesh-eating bacteria.

The next six weeks became a fight for survival. He had a surgery every other day — 17 in total. He got pneumonia and had fluid around his heart. Surgeons removed part of his abdominal muscle to fill the holes in his leg. Bridenbaugh just wanted to get back to school to focus on academics and be back on the football field.

“It was still a goal in mind no matter what,” he said.

He eventually returned to school and shuffled between a walking boot, crutches and a wheelchair. Football was still on the table, he thought. He was on crutches at school one day and felt a pinch. His dad was a teacher there and rushed to his son. They discovered his bone had come through the skin of his foot.

Soon, he heard the word “amputation” for the first time.

“I knew nothing about it,” he admitted. “But, when you hear that as a 17-year-old kid, it sounds like a death sentence.”

That was 13 years ago, and it has been anything but a death sentence.

Turning his motivation toward academics has enabled a trickle-down effect on four semesters-worth of undergraduates taking his course, "Education in American Culture." Often, they finish his class with a deeper understanding of what they want to accomplish academically, and with a grasp on how they can motivate themselves intrinsically, beyond the desire to earn a good grade.

“Motivation is very hard for students,” Bridenbaugh said. “They think about outside sources of motivation — to get a degree, to get a job. I help them find something intrinsically that motivates them. I challenge students to take it a step further, to seek that inherent drive that goes beyond those outside motives for pursuing an education.”

He always shares the story of his amputation in class. Bridenbaugh believes everyone has his or her own story, and while it may not be as dramatic as his own, he doesn’t compare that aspect. The key is that a personal story is where most students find their reason for going beyond surface-level motivation and find a deeper purpose and drive.

“Becoming an amputee and a strong proponent of motivation has most certainly had an impact on my drive towards teaching and learning,” he said. “I remind each student not to forget who they are and where they come from each time they walk through the doors of a classroom. When engaging in discussions, I encourage them to stay away from rote learning and regurgitation; their unique ideas and opinions will someday stimulate innovation in their respective fields. One way I help them realize that their ideas and opinions matter is to give them the opportunity to talk about those beliefs and philosophies in the diverse and safe environment of my classroom.”

One of the people who has helped him most in graduate school has been his advisor in the Department of Educational Policy Studies and Evaluation, Kelly Bradley, with whom he has connected academically, as well as on a personal level.

“Sy constantly reminds me that trials are life’s way to show you that you have more to learn — ways to grow — new ways to explore,” she said. “Serving as his advisor, I have had the opportunity to share many of his academic, professional and personal journeys. These experiences have blessed me and made me a better educator and person.”

Bridenbaugh still has rough days, both physically and mentally, and he shares that with his class too. He is a motivational speaker and started blogging about his experience at www.lifeononeleg.com. He waited several years to start because he wanted to say more to people going through difficult situations than “you’ll overcome this.” He had to prove to himself that it was true.

Soon, he hopes to have “Ph.D.” behind his name. While achieving that goal will open new doors for him, the process of getting there has been life-changing. He believes that people are shaped by their experiences.

Bridenbaugh is married now, which was also a turning point for him.

“Sarah met me as an amputee,” he said. “There is something to knowing that someone accepted that about me and would want to be with me forever.”

Some of his biggest fans are his students, who embrace his story and use it to help define their own. A stack of letters from students is attached to the nomination packet for his teaching award. They wrote about his passion, his connection with the class and the concern he shows for them as individuals in matters related to class and beyond.

“It took me a long time to appreciate what I’d gone through,” Bridenbaugh said. “I had to learn to deal with it and accept it at first. But I don’t think I would have the clarity in how to give encouragement to other individuals, if not for my injury. It’s something we lack in society, caring about others. I saw how important my support was from other people and I thought ‘I have to pass it on and use that experience for a reason.’”

To learn more about Bridenbaugh’s story or contact him about motivational speaking, visit www.lifeononeleg.com or email him at sy.bridenbaugh@gmail.com.