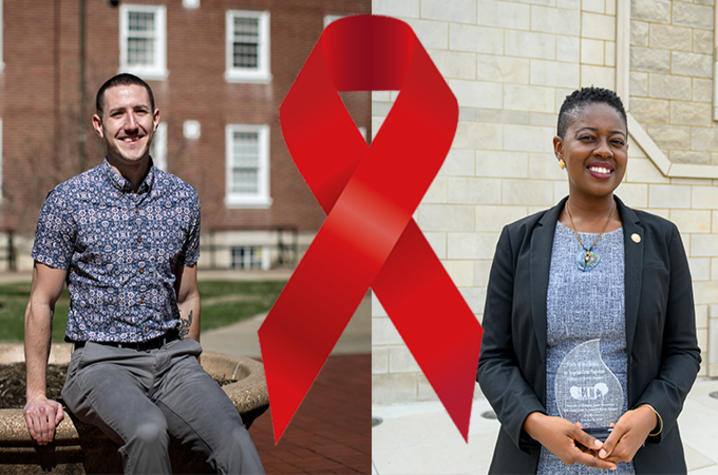 LEXINGTON, Ky. (Dec. 1, 2020) — Today is World AIDS Day, a day that signifies the opportunity for people around the world to unite in the fight against HIV, support those living with it and commemorate those who have died from AIDS-related illness.

Founded in 1988, World AIDS Day reminds the public and governments that HIV has not gone away — there is still a vital need to raise money, increase awareness, fight prejudice and improve education.

Globally, there are an estimated 38 million people currently living with HIV. Despite the virus only being identified in 1984, more than 35 million people have died of HIV or AIDS, making it one of the most destructive pandemics in history. While there is no cure, scientific advances have been made in HIV treatment. However, many people do not know the facts about how to protect themselves and others, and stigma and discrimination remain a reality for many people living with this disease.

The University of Kentucky has many students, faculty, staff and alumni working in HIV/AIDS research and prevention. Two of those people, alumni Trey Cardwell and Angelica Geter, are using their UK education to improve education and treatment access across Kentucky, the United States and the world.

Trey Cardwell graduated from the University of Kentucky with a bachelor’s degree in biology in 2016, and then with a Master of Public Health in 2018. Following graduation, he spent a year and a half with the Peace Corps in Lesotho, Africa, where he worked to increase and improve education on the prevention of HIV/AIDS among youth populations (Cardwell was supposed to serve two years, but his time was cut short due to the global COVID-19 evacuation earlier this year).

Cardwell now works as an epidemiologist in HIV/AIDS surveillance for the state of Kentucky. In this position, he collects information about HIV/AIDS infections in the state and uses the data to inform efforts to reduce transmission. This can include targeted testing, outbreak detection and syringe exchange programs.

“Some efforts are very successful, but there are still many new HIV infections at home and abroad, so there is still a lot of work to be done,” Cardwell said. “I think the next steps in prevention involve systematic changes like comprehensive sexual health education and policy reform for opioid prescription and safe injections sites. Real efforts need to be made by policymakers to make evidence-based changes.”

In April 2021, Cardwell will begin a research-based Ph.D. program at the University of Melbourne in Australia, where he will develop an online sexual health clinic to pilot in the city of Melbourne.

Cardwell says he first found his calling to work in HIV/AIDS prevention and sexual health during his time at UK.

“It was during my undergraduate degree, as a 'sexpert' peer health educator, that I really found my passion for sexual health,” Cardwell said. “Throughout my time at UK there were several people I would call a mentor. Joanna Brown at University Health Service was the first person to really spark my passion. In my graduate degree at the UK College of Public Health, Tom Collins took me under his wing and supported me through all of my endeavors. I was also able to work with some leading researchers in the field, including College of Public Health professors Richard Crosby and April Young.”

On this World AIDS Day, Cardwell’s message to everyone is simple: educate yourself.

“Stigma is one of the longstanding issues surrounding HIV, and it is fueled by ignorance and a lack of understanding,” he said. “If there is one thing I would want people to know, it's that people living with HIV are just like everyone else and can live a long, happy and healthy life.”

A native of Mississippi and a graduate of both UK and the Emory University Rollins School of Public Health, Geter currently serves as chief health officer for the city of Atlanta. As chief health officer, Geter's focus includes addressing HIV transmissions, mental health, heart disease and other chronic illnesses affecting the Atlanta community. And — because Atlanta is a highly diverse metro area, and so many of these conditions are inextricably linked with intersectional issues of race, gender, sex and class — she puts a great deal of time into serving as a convener of people and resources.

During her time at UK, Geter was also mentored by Crosby, who is a professor of health, behavior and society in the College of Public Health. At the time, Crosby was one of the few researchers doing “high-level” work on HIV in populations of African American men. With Crosby just beginning a new study in Jackson, Mississippi, Geter jumped at the chance to be part of a project that would take her back to her roots in her home community.

Geter credits Crosby and co-investigator Leandro Mena of the University of Mississippi Medical Center with helping her fulfill her goals of academic scholarship, grant writing and implementation of culturally appropriate health interventions.

“As a graduate student, I learned how to develop R01 grants and had the opportunity to manage programs funded by the National Institutes of Health,” she said. “I left UK as a highly published public health scientist.”

Last October, Geter traveled back to Lexington to receive the Lyman T. Johnson Torch of Excellence Award during UK Homecoming festivities. The award is presented annually to Black alumni “whose faith, hard work and determination has positively affected the lives of people on the UK campus, the city, state or nation.”

Read more about Geter in the winter 2020 issue of Catalyst, the UK College of Public Health’s magazine.