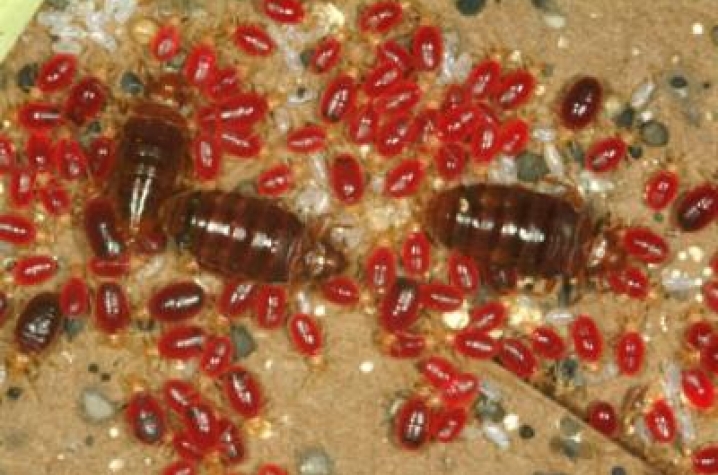 LEXINGTON, Ky. (Feb. 3, 2016) — Nobody likes to think of getting a bed bug bite, but those bites have become all too common in recent years. Now a group of international researchers has taken a significant step forward in understanding how to control these pesky insects.

The group called the Bed Bug Genome Consortium recently sequenced the genome of this insect. Their findings, which included more than 14,000 protein-coding genes, were recently published in a journal article in Nature Communications.

“We now have a blueprint of what is in the genome of this insect,” said Reddy Palli, entomologist in the University of Kentucky College of Agriculture, Food and Environment and co-leader of the consortium. “This new information is definitely going to increase our research productivity and move us toward our ultimate goal of developing better ways to control them.”

Palli and his lab members Hemant Gujar, Jayendra Nath Shukla and Fang Zhu are all co-authors on the study. In a previous study, Palli’s lab found genes in the bug’s tough outer shell that could be related to its ability to resist pesticides.

Through the genome sequencing, scientists found genes linked to the insect’s unique form of reproduction, called traumatic insemination. In this process, a male pierces the female’s body and deposits sperm into her body cavity. In addition, researchers found genes linked to smell and taste that give the insects the innate ability to find a blood meal and then feed without inflicting pain on their host. Researchers also found hundreds of gene transfers to the bed bug genome from bacteria, most notably Wolbachia and Arsenophonus.

Scientists will now be able to take the sequenced genome and begin subsequent studies in their areas of interest. UKAg entomologist Ken Haynes is optimistic about future research.

“The sequencing of the bed bug genome and how it compares with those of other arthropods will enable us to explore what makes bed bugs unique and perhaps uniquely vulnerable,” he said. “I’m particularly interested in what the genome will tell us about the bed bug’s unusual mating, aggregating and host-finding behaviors.”

In Palli’s lab at UK, researchers will use the sequenced genome to further understand bed bugs’ resistance to pesticides and bed bug biology with the goal of finding a way to halt reproduction and ultimately control insect populations.