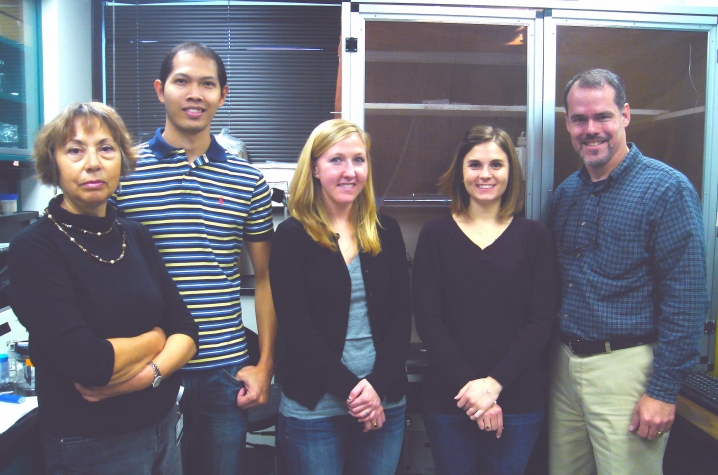 LEXINGTON, Ky. (Dec. 10, 2012) — A research team composed of University of Kentucky researchers has published a paper which provides the first direct evidence that activated astrocytes could play a harmful role in Alzheimer's disease. The UK Sanders-Brown Center on Aging has also received significant new National Institutes of Health (NIH) funding to further this line of study.

Chris Norris, an associate professor in the UK College of Medicine Department of Molecular and Biomedical Pharmacology, as well as a member of the faculty at the UK Sanders-Brown Center on Aging, is the senior author on a paper published recently in the Journal of Neuroscience, entitled "Targeting astrocytes to ameliorate neurologic changes in a mouse model of Alzheimer's disease." The first author on the article, Jennifer L. Furman, was a graduate student in the Norris laboratory during completion of the study.

The astrocyte is a very abundant non-neuronal cell type that performs absolutely critical functions for maintaining healthy nervous tissue. However, in neurodegenerative diseases, like Alzheimer’s disease, many astrocytes exhibit clear physical changes often referred to as “astrocyte activation.” The appearance of activated astrocytes at very early stages of Alzheimer's has led to the idea that astrocytes contribute to the emergence and/or maintenance of other pathological markers of the disease, including synaptic dysfunction, neuroinflammation and accumulation of amyloid plaques.

Mice received the gene therapy at a very young age, before the development of extensive amyloid plaque pathology, and were assessed 10 months later on a variety of Alzheimer's biomarkers.

Norris and collaborators suggest that similar astrocyte-based approaches could be developed to treat humans suffering from Alzheimer's disease, or possibly other neurodegenerative diseases. This study provides proof of principle that therapeutically targeting astrocytes can be beneficial.

Norris has been named the principal investigator on a new NIH award totaling $1,498,423 over a period of 5 years, to continue this line of research on Alzheimer's disease.

The work on which the article is based was supported by NIH funding, a PhRMA Foundation Predoctoral Fellowship, the Kleberg Foundation, and a gift from Jeffrey and Patti Tautenhan.