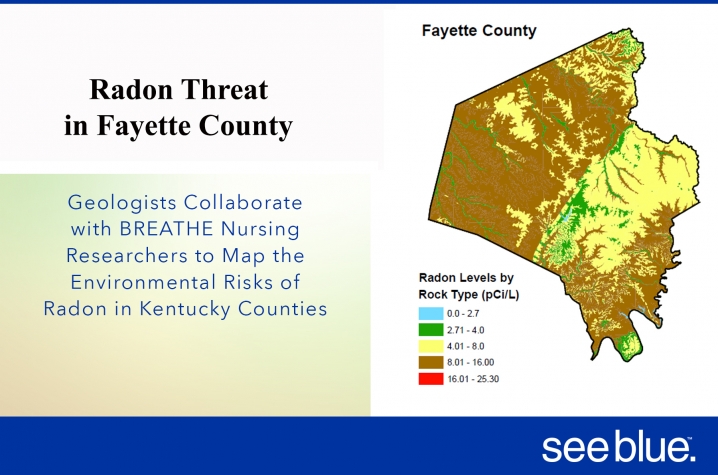 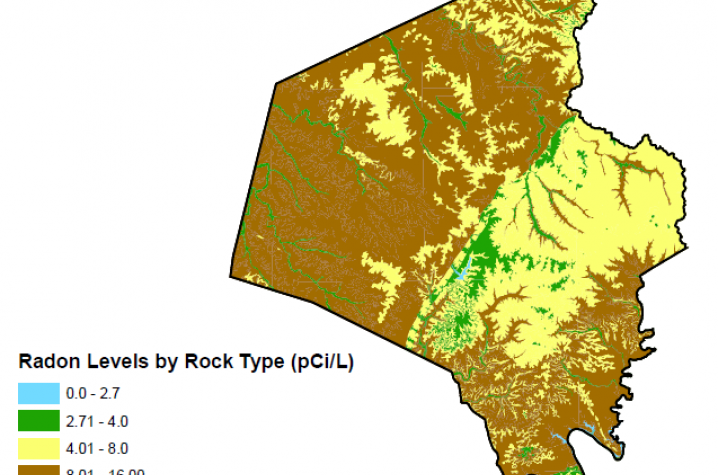 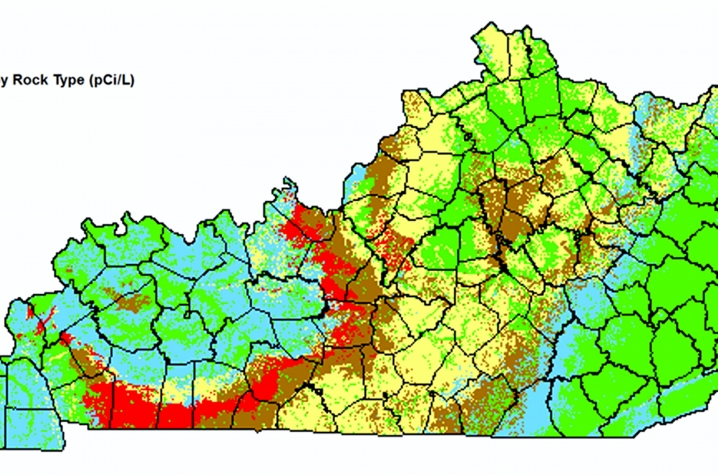 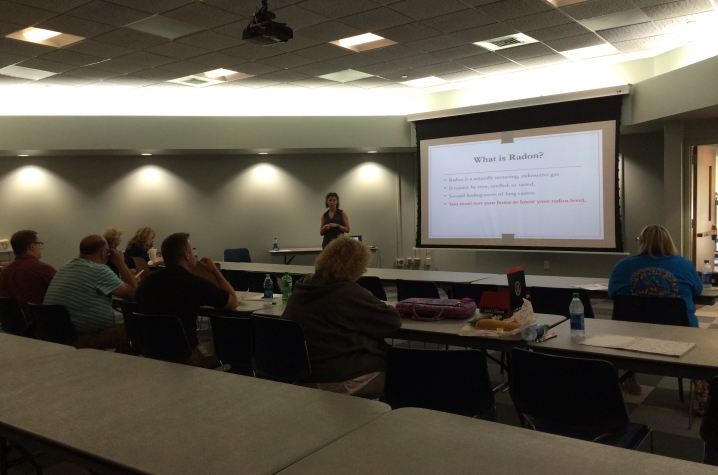 LEXINGTON, Ky. (Aug. 15, 2016) — A blending of ideas, expertise and perspective allows research teams to consider every angle of a public health problem, leaving no stone unturned in the search for a solution.

For Ellen Hahn, a professor in the UK College of Nursing and director of the Bridging Research Efforts and Advocacy Toward Healthy Environments (BREATHE) initiative, understanding the risk potential of radon across Kentucky’s diverse geological landscape required digging beneath the surface of the issue.

Radon is a radioactive gas emitted from rock formations below the ground. As the element uranium rises from the earth, it decays to become radon, which releases hazardous particles into the atmosphere. Exposure to these radioactive particles can alter DNA in human cells and cause lung cancer, especially when combined with exposure to tobacco smoke. Only a radon test can detect radon in a home or building structure.

Radon test kits measure the levels of radon in a home, but household radon levels can vary from neighbor to neighbor. While the occurrence of positive radon tests above the earth’s surface can predict the presence of radon, the rock formations below the soil surface also indicate the radon potential for a particular geographic area.

In an effort to understand the variability of radon risk potential in households across Kentucky, Hahn and colleagues in the UK College of Nursing recently collected the results of more than 60,000 radon test kits from radon measurement laboratories recorded as early as 1986. But because radon potential is also tied to geological makeup, the radon test data was only one way to understand radon potential. BREATHE researchers were missing complementary geological data, another indicator of radon potential, to connect with their public health data.

Geologists at the University of Kentucky had already mapped the dynamic geological formations underneath Kentucky and identified specific rock formations associated with a heightened risk of radon exposure. In fact, researchers in the Kentucky Geological Survey (KGS) at UK had mapped, measured and digitized rock formation data for the entire state. After reading a column about the risks of radon in Kentucky written by Hahn in 2013, Bethany Overfield, a geologist at the KGS, contacted Hahn with the proposition of merging their data into a comprehensive radon risk map of Kentucky.

The two departments overlaid Hahn’s public health data with the KGS geological formation data to develop a comprehensive radon risk potential map of Kentucky. The geologic map of Kentucky includes color-coded sections to indicate the level of radon risk. Whereas a map designed by the Environmental Protection Agency (EPA) assigned a level of risk for each county, the BREATHE initiative map accounted for multiple risk factors and shows the gradient radon potential within counties and across geographic features. The team published a paper on their initial findings from an analysis in north-central Kentucky in a 2015 issue of Preventive Medicine Reports.

Using the more recent data from over 60,000 home radon tests, the researchers designed maps specific to 15 Kentucky counties, which were selected based on lung cancer risk factors and existing local radon programs. The maps depict the variability of radon potential within a county, showing a range of radon risk levels. Hahn and BREATHE researchers are partnering with local health organizations to distribute the maps to local stakeholders and inform citizens of the radon risks in their geographic location and to promote radon testing.

“It is a collaboration between two disciplines that might not traditionally be seen as related,” Hahn said. “There is a new and emerging emphasis on geology as we think about other disciplines, in this case, nursing and public health.”

Overfield said Kentucky’s karst topography contributes to its high radon emissions. Karst topography is landscape formed from the dissolution of soluble rock, such as limestone, which creates sinkholes and cavernous underground formations that provide routes for uranium to move and escape into the atmosphere. The constituents of the rocks, or the sediments and particles comprising the rocks, are the origins of uranium gas that becomes radon. For this reason, radon risks are not defined by political boundaries but rather by the rock formations underneath the ground despite county lines. For instance, the radon risk inside a house constructed on a sandstone formation may be lower than a house constructed on shale or limestone.

“Radon is directly associated with rocks and soil,” Overfield said. “It is much more dynamic than a county line, and that is the impetus for the whole research collaboration.”

Radon is the second-leading cause of lung cancer. The triple threats of smoking (the leading cause of lung cancer), radon exposure, and secondhand smoke compound the risk of developing lung cancer in Kentucky. Through the radon mapping collaboration, Hahn has identified areas of Kentucky where public health prevention and intervention can reduce these three lung cancer threats. Smoking, radon exposure, and secondhand smoke are all preventable or treatable conditions. Hahn hopes to use the maps to target specific geographic areas with interventions to reduce smoking rates, eliminate exposure to secondhand smoke, and mitigate radon potential.

“The reason I am interested in radon is because of its synergy with tobacco smoke exposure,” Hahn said. “Most of the cases of radon-induced lung cancer are in people who are current or former smokers or have been exposed to secondhand smoke. If you have ever smoked or have been exposed to secondhand smoke, it’s even more important to test for radon in the home and where you work.”

Radon mitigation systems reduce exposure by removing trapped or contained radon gas from homes and other buildings. Kentuckians residing in high radon potential areas should test their house for radon through a free or low-cost take-home kit. Levels of radon are measured by picoCuries, which measure as one-trillionth of one gram of radon, per liter of air. Property owners should call a certified radon professional if the test kit reads at or above 4.0 pCi/L. Homeowners and property owners should test for radon every two years.