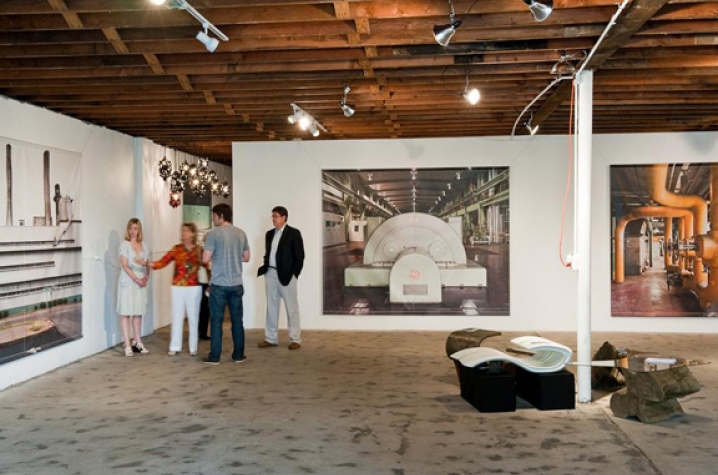 LEXINGTON, Ky. (Aug. 27, 2009) − The University of Kentucky College of Design is taking design to the Commonwealth's river cities as they launch a new project that will focus on the creation of strategic design proposals for these communities along the Ohio River. To commemorate the launch of the "River Cities Project," a multi-year research and design initiative, the college will host a free public photography exhibition of the recently retired HMPL1 coal-burning power plant in Henderson, Ky., the first city the project will focus on in the coming years.

Beginning in Henderson, UK College of Design will work with local communities and cities along the Ohio River to develop strategic design proposals intended to make them more competitive players in an increasingly knowledge-based, energy-focused economy.

"The River Cities Project: Henderson, KY" is an exhibition of supersized images of HPML1. The large-scale prints (4 feet x 8 feet) are by recognized architecture photographer Frank Doering. An opening reception will be held to celebrate the launch of the project and the exhibition at 6 p.m. Thursday, Sept. 3, at the RiverBend Academy, School of Visual and Performing Arts, located at 320 Center St., in Henderson. The reception and exhibition that runs through mid-September, are free and open to the public.

The "River Cities Project" is an extension and expansion of "The Henderson Project," which began in June 2007 when students from UK College of Design and the Southern California Institute of Architecture in Los Angeles traveled to Henderson for a five-day design workshop. The workshop was organized to speculate on Henderson's future development, especially in light of changing economic and demographic conditions. In designs presented to the community, including a number of compelling proposals for the Henderson riverfront, students explored the history, culture and unique personality of Henderson.

The success of the workshop led Henderson natives Tim Skinner, Mark Bethel and Drura Parrish to found "The Henderson Project." The project's aim was to initiate a more structured collaboration between the Henderson community and UK College of Design that would not only raise funds to support future student projects, but that would also raise awareness and expectations about how design might enable communities and small towns to realize their potential.

Since arriving in 2008, College of Design Dean Michael Speaks has embraced "The Henderson Project" as the model for a new post-graduate master's degree that will specialize on designs of river cities along the Ohio River.

"We have been welcomed with open arms by the entire Henderson community--from city and county government to local businesses, schools and citizens," said Dean Speaks. "We are excited to begin work this semester and have put together an all-star team. But our greatest asset will be the collective knowledge held in the community of Henderson itself coupled with the limitless imagination of our students."

The "River Cities Project" will begin this year with a one-year studio focused on Henderson. The studio will include graduate students from all three schools at the UK College of Design - School of Architecture, School of Interior Design and Department of Historic Preservation - and will draw on College of Design faculty, as well as visiting faculty and external experts.

This fall, the first graduate level studio will develop strategic design proposals for the city of Henderson. The studio will be led by Matthijs Bouw, UK College of Design Sutherland Visiting Professor of Landscape Design, along with School of Architecture Professor Ann Filson. Bouw is a principal at One Architecture in Amsterdam.

In spring of 2010, the emphasis will shift to the recently retired HMPL1 plant and the Henderson riverfront. The studio will develop designs that will adaptively reuse the recently decommissioned HPML1 plant situated between two existing parks on the scenic Ohio River in Henderson. This studio will be led with by the UK College of Design Sutherland Visiting Professor of Landscape Design for the spring semester.

For more information on the "River Cities Project," contact the UK College of Design at (859) 257-5367 or visit the project online at www.uky.edu/Design/Henderson.