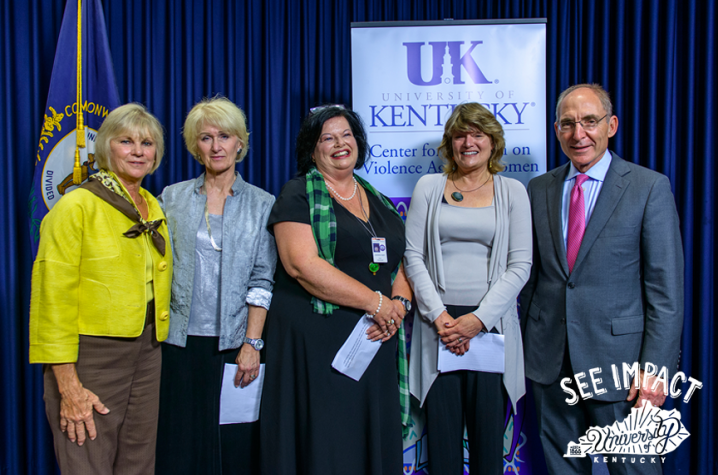 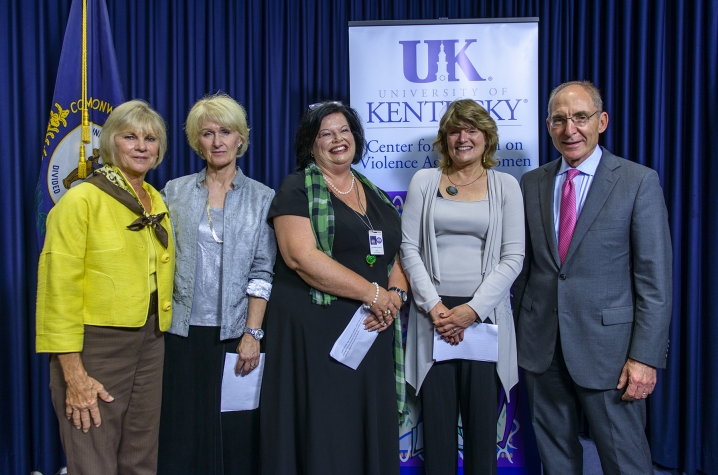 LEXINGTON, Ky. (Sept. 10, 2014) — The University of Kentucky's “Green Dot” violence-prevention program is effective in reducing sexual violence, according to preliminary findings from a five-year study evaluating the program in Kentucky high schools.

The study, led by Ann Coker at UK's Center for Research on Violence Against Women (CRVAW), found a greater than 50 percent reduction in the self-reported frequency of sexual violence perpetration by students at schools that received the Green Dot training, compared to a slight increase at schools that did not.

Sexual violence continues to be a serious problem for Kentucky teens. One in seven high school students in Kentucky experience physical dating violence, and one in 11 have had unwanted sex because they were physically forced, or too intoxicated to give consent.

Coker announced the findings at a news conference Wednesday afternoon at the Kentucky State Capitol. Among those present were Kentucky First Lady Jane Beshear, UK President Eli Capilouto, and Eileen Recktenwald, director of the Kentucky Association of Sexual Assault Programs (KASAP), which partnered with UK and CRVAW researchers to coordinate interventions into schools statewide.

In her remarks, Coker identified violence prevention as a public health priority.

“We know that violence significantly affects high school students’ lives by causing physical injuries, missed school days, and increased need to both medical and mental health services,” Coker said. “This is true for both young women and men. Finding strong evidence for this program’s ability to reduce violence is very important and could result in dramatic reductions in health care costs.”

Mrs. Beshear discussed violence against women as an issue of particular importance for Kentucky, and one to which she feels a strong personal commitment.

“Current rates of sexual violence among young Kentuckians are unacceptable,” she said. “Teenagers already face enough struggles without having to cope with trauma of physical abuse. The Green Dot study proves that sexual violence education is the key to successfully preventing abuse and plays an important role in reducing the state’s overall rates of violence. I commend UK, Dr. Coker and all of the researchers and participants in this study who are paving the way toward broad violence prevention in the Commonwealth.”

Capilouto praised the Green Dot program for being “ahead of the curve” in relation to a growing demand for sexual assault prevention programs on college campuses nationwide.

“As educators, we have an obligation to provide our students with a safe place to live and learn,” he said. “It should be obvious that sexual assaults on campus cannot be tolerated. Yet, as the problem persists across the country, administrators are being challenged by the simple question: ‘What are you doing to prevent it?’ At the University of Kentucky, we have an answer. The Green Dot program was ahead of the curve in providing a model for evidence-based, bystander-intervention training for violence prevention on campus.”

“In the 40 years since the anti-rape movement began in Kentucky, the rates of sexual violence have steadily risen; they have never reduced,” Recktenwald said. “The idea that, due to the effectiveness of Green Dot, we can change that, that there will be many fewer young people suffering the pain and devastation of sexual violence: This is priceless.”

Green Dot, designed by former UK faculty member Dorothy Edwards, has been in use at the university since 2008. It teaches students how to identify situations that could lead to an act of violence (represented on incident maps by a red dot) and shows them how to intervene safely and effectively. A “green dot” represents “any behavior‚ choice‚ word‚ or attitude that promotes safety for all our citizens and communicates utter intolerance for violence.”

In 2009, rape crisis center staff and CRVAW researchers recruited 26 high schools across Kentucky to participate in a randomized statewide intervention trial, funded by the Centers for Disease Control and Prevention. Half of the schools were assigned to receive the Green Dot intervention, with the others serving as the study's control group. Green Dot interventions were conducted by trained rape crisis staff educators from KASAP-affiliated regional centers.

The interventions were implemented in two phases. In Phase 1, rape crisis staff delivered Green Dot speeches to all students in the intervention schools. In Phase 2, completed in the spring of 2012, educators implemented intensive bystander training. This training was conducted in smaller groups, among students perceived as leaders (about 10-15 percent of the student body).

In total, more than 80,000 surveys were completed. Researchers compared survey-reported sexual violence rates before program implementation with rates from 2010-2014. Over time, the mean reported violence frequency increased slightly in the control schools, while it declined significantly in the intervention schools. These results provide strong evidence that the Green Dot program, as implemented by trained rape crisis staff, does reduce sexual violence, Coker said.

All high schools participating in the Green Dot randomized intervention trial will have the option to adopt or continue using the Green Dot program. KASAP will continue to provide the staff to implement this program in these schools. Funding to support this training will be provided by CDC Rape Prevention Education grants provided to the state of Kentucky.