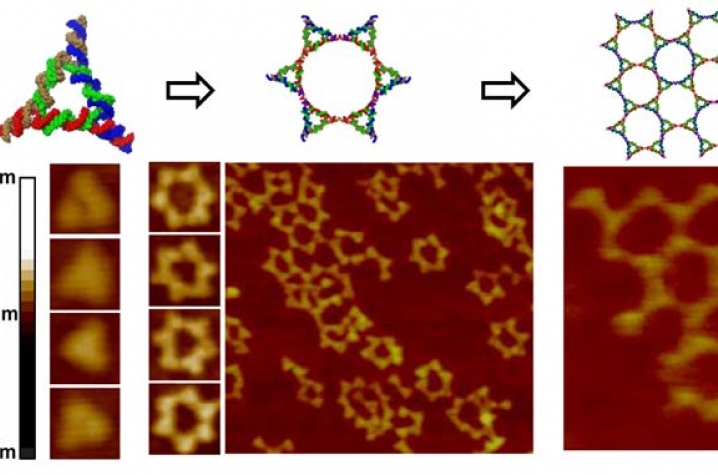 LEXINGTON, Ky. (April 22, 2014) — A team of nanotechnology researchers at the University of Kentucky has discovered new methods to build heat resistant nanostructures and arrays using RNA.

The research, led by Peixuan Guo, professor and  William Farish Endowed Chair in Nanobiotechnology at the UK College of Pharmacy and Markey Cancer Center, is reported in an article titled "RNA as a Boiling-Resistant Anionic Polymer Material To Build Robust Structures with Defined Shape and Stoichiometry," coauthored by Emil F. Khisamutdinov and Daniel L. Jasinski.

The article, which will appear in a forthcoming edition of the journal ACS Nano, published by the American Chemical Society (ACS), was selected as an ACS "Editors’ Choice" and prepublication data is available for free download as a PDF through open access at http://dx.doi.org/10.1021/nn5006254.

Chemical polymers have seen extensive use in a variety of industries — including clothing, piping, plastics, containers, bottles, cookware, tools and medical materials for drug delivery and tissue engineer materials — because of their high stability and ability to hold their global shape and size. However, on the microscopic scale, these polymers form into random micro-structures, making their size and shape difficult to control.

The Guo lab reports that RNA (ribonucleic acid) can be used as an anionic polymer material to build nanostructures with controllable shape and defined structure. The researchers have fabricated a new RNA triangle structure that utilizes RNA’s intrinsic control over shape and size on the nano scale, while demonstrating strong stability.

Previously, RNA was seen as structurally fragile and easily dissociable at a range of temperatures from 35-70 degrees Celsius, making its application feasibility in an industrial setting very limited. Using the special RNA motif discovered in Guo's lab and a new methodology, the researchers demonstrated that they can build RNA nanostructures and patterned arrays that are resistant to 100 degrees Celsius, the boiling temperature of water.

The new RNA triangular nanoarchitechtures can be used to form arrays with a controllable repeat number of the scaffold, resembling monomer units in a polymerization reaction. Thus, the Guo lab was able to produce a honeycomb RNA structure with the new RNAs, allowing for the production of RNA sheets.

Experts say this breakthrough pushes the field of RNA nanotechnology forward, positioning RNA to be a new, unique type of polymer with advantages over conventional chemical polymers.

"This research shows great potential for building stable RNA nanoparticles with properties that could be more easily controlled than standard polymers," said Jessica Tucker, National Institute of Biomedical Imaging and Bioengineering program director for drug and gene delivery systems and devices. "The more control we have over the nanoparticles, the better we can tailor them for use in therapeutics for diseases ranging from cancer to diabetes."

The research was supported by National Institute of Biomedical Imaging and Bioengineering AND National Cancer Institute grants NIBIB EB003730 and NCI CA151648.