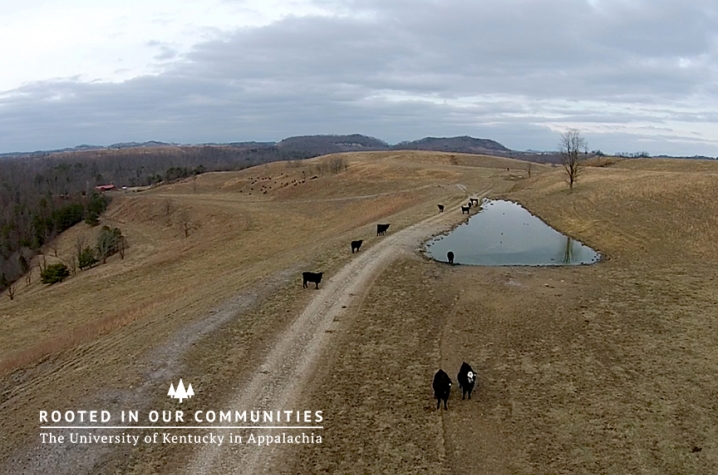 LEXINGTON, Ky. (Sept. 10, 2015) — Perry County, Kentucky is mostly mountainous, but if you drive far enough up a particular road, there's a place that looks like Texas:  the sky suddenly opens, the land is flat and treeless, and cattle are grazing. There's even a cowboy, who really is from Texas and runs the cattle horseback, hat and all.

This place is D & D Ranch. It consists of 1,000 acres atop a reclaimed strip mine, and it's the home of the East Kentucky Heifer Development Project, which has helped local farmers improve their cattle herds for the last 17 years.

"It's just a farm on a strip mine. I guess it's kinda unique if you've never seen that," Charles May, the Perry County Extension agent for agriculture and natural resources, said.

May was raised on a beef farm and has served as a University of Kentucky extension agent for three decades. He worked with Les Anderson, professor of extension in the UK College of Agriculture, Food and Environment, to start the heifer development project in 1997 in collaboration with D & D Ranch. Anderson, an expert in beef cattle and reproductive physiology, recognized that improving the quality of cattle stock could significantly help the farmers and beef market in the region. At the same time, researchers could examine the needs and output of grazing cattle on reclaimed strip mines.

"East Kentucky always had a stigma that their cattle is bad and they got discounted when they went to sale barns," May said. "That's really the goal of the this — to get good genetics on the farm."

According to May, many of the small farms in the area don't have the resources — in terms of land, time, or expertise — to properly develop their herds, especially with consideration to genetics. The project at D & D Ranch, however, can do it for them. Every October, around 300 heifers are brought to the farm from 80 to 100 individual producers. Each heifer is checked, wormed, vaccinated, artificially inseminated, and receives expert and dedicated care until it and its calf are sold or returned to their home farm the following September.

The project has helped to improve the quality and price of local beef cattle at a time when prices in the industry are up across the board. To date, more than 6,100 heifers from more than 200 farms in 18 Kentucky counties and five neighboring states have come through the program, with an estimated return of more than $1 million in sales going back to the farmers. In 2014, Eastern Kentucky Bred Heifer Sale had a sale average of $2,553, surpassing the previous year's sale average by more than $1,000 per head, and the top-selling heifer brought in $3,100. Surveys of farmers indicate that their weaning weights have increased by 150 pounds as a result of the program and, according to May, local livestock auction facilities credit the project as a major contributor to the improved quality of cattle they sell.

In addition to its unusual location, the project is also distinctive in its model and standards. Individual beef producers consign their cattle to the ranch (but retain ownership) for the entire season, instead of keeping them on their own farms, as in most other heifer development projects.  This means that May and Larry Clay, the cowboy from Texas who serves as manager of D & D Ranch, personally take care of each animal from the time it enters the ranch until it leaves. Thanks to such expert and dedicated care, the project has the highest standards of any heifer development program in the state. All animals have to be farm-raised, for example, and the required pelvic measurement is 10 centimeters larger than industry standard in order to reduce calving problems.

May explains that their small, hands-on model has helped improve not only the genetic quality and prices of the cattle over time, but also protects the health of individual animals each year.

"The animals are comingled together from an early age, so illness is reduced. We have very low death rate. The most we've lost is three to four out of several hundred, well below the 2-3 percent average. And then at sales they're also safer because they've been comingled," he said.

Clay helped design and build the ranch from scratch. There was nothing — not even a fence— when he first arrived from Texas. At first he wasn't sure how the ground would support a farming operation, but he's still pleasantly surprised all these years later.

"I think about it sometimes, about what we do with this ground, what it does, what we're able to produce — the kind of cattle we do raise here. It's still hard for me to believe that it'll grow the kind of grass it does," he said. "It's just like growing grass on a landfill, basically. A lot of rocks. It's just hard to believe. I guess I've been here for so long, I take it for granted. It still amazes me, you know, how productive this stuff is for what it is. Sure does."

He says that working with the University of Kentucky has provided extensive information and resources, as well an opportunity to contribute to a better understanding of cattle production and grazing on reclaimed mining land.

"It was kind of exciting to do something different. There was no data on how productive this stuff was, how many cows you could run per acre or how many acre per cow," Clay said. "They did a pretty extensive study on it — five years and four acres. They did a lot of soil samples and forage samples and spent a lot of time, lot of effort on this thing here. The results were that it's pretty good stuff. For what it is, it supported cattle production really well. We've been involved with UK in some project or another for just about 22 years probably out of the 25 I've been here. It's been a good relationship."

Dean Craft, a cattle farmer from Knott County, has reaped benefits from the relationship, too. He's consigned cattle to the project every year since it started and says that participating in the program is "a no-brainer."

"It's been very educational and entertaining. I've met a lot of good people over here. They have taught me a lot about cattle. We have a lot of fun over here," he said. "It was something new for our area. It's a unique heifer development program and we're open for ideas, anything to do to improve our herd."

Not only has he seen his sale prices and herd numbers increase, he's felt more pride about the animal he takes to sales.

"We have increased our herd numbers. We've been at the bottom of the heifer sale and we've been at the top as far as price goes. So we improved overall quality of our heifers, yes, and just seeing the difference in the prices our cattle bring at the market and saying 'That is my heifer' instead of sort of backing over in the corner and saying 'I hope she brings something today,'" he said.

May knows the impact of the program exceeds price points, pride and education.

"It's hard to put a monetary figure on what you've done. You can say how much these bring in over regular market, but that doesn’t count what the heifers have done for the farmers. It's put a lot of money back in the pockets of the consigners. I think it's probably helped keep some people on the family farm," he said. "To know that you're helping people is rewarding. Probably the most rewarding thing I've heard is from several of these consigners, who've got cattle in this now, that everything they own came through this program."

This story is part of our ongoing series, Rooted in Our Communities, which explores how UK is working with communities in Appalachia. Read more here.