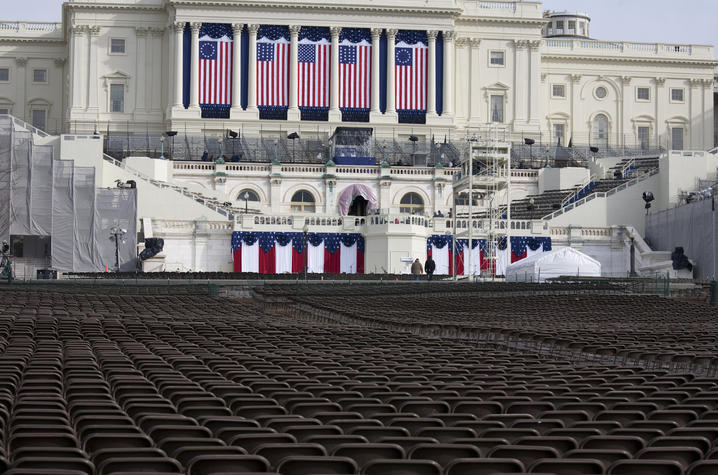 At noon, a formal ceremony will mark the start of the new presidency. While key elements will remain steeped in tradition, many events won’t look like those of the past. Instead, they have been “reimagined” as the United States continues to battle the COVID-19 pandemic.

After a tumultuous year in politics, how will this inauguration go down in the history books?

Tiffany Barnes, an associate professor in the Department of Political Science in the College of Arts and Sciences at the University of Kentucky, conducts research on comparative politics. She lends her expertise in the Q&A session below.

UKNow: Why has Jan. 20 become a significant day in U.S. history?

Barnes: Since the second inauguration of Franklin D. Roosevelt in 1937, every president has recited the presidential oath and assumed office on Jan. 20. Both the date, and recitation, are mandated by the U.S. Constitution.

Since the inauguration of President Reagan in 1981, the ceremony has been hosted on the west side of the Capitol lawn. In the event that Jan. 20 falls on a Sunday, the president is traditionally sworn in privately on the 20th with a public ceremony to follow on the 21st.

In addition to the oath-taking ceremony, the peaceful transition of power is commemorated with a number of celebrations ranging from the congressional luncheon immediately after the ceremony and the inaugural parade to the interfaith national prayer service in the day following the inauguration and numerous inaugural balls.

UKNow: How will COVID-19 change this year’s inauguration?

Barnes: The COVID-19 pandemic is sure to impact the number of spectators at the ceremony. Despite that, as of Wednesday, Jan. 12, the official plans were for President-elect Biden to be sworn in on the west lawn of the U.S. Capitol. However, the Presidential Inaugural Committee requested that Americans stay home and celebrate the inauguration virtually.

Instead of the traditional inaugural parade past a reviewing stand in front of the White House, organizers plan to hold a televised “virtual parade across America.” So, if all goes as planned, and Americans do their part to limit the spread of COVID-19 by staying home, I think it is safe to say that there will not be any disputed claims about crowd size following the 2021 inauguration.

Additionally, a virtual lighting ceremony honoring American lives lost due to COVID-19 will take place on Jan. 19 at 5:30 p.m. at the Lincoln Memorial Reflecting Pool. Communities across the country are invited to join by lighting buildings and ringing church bells.

UKNow: This year’s inaugural theme is “America United.”​ Does this event possess the power to bring the nation together on the heels of such a tumultuous and polarizing year in politics?

Barnes: Unfortunately, I don’t think the 2021 inauguration holds much promise for reuniting the nation. The inauguration comes on the heels of an insurrection in which supporters of President Trump stormed the nation’s Capitol in an effort to stop the peaceful transfer of power.

On the other hand, the incoming president has committed to unifying the nation, pledging to be "a president for all Americans" and to "work just as hard for those of you who didn't vote for me, as I will for those who did." Biden’s rhetoric signals a clear break from divisive language. That Biden sees himself as the president of all Americans, and not just his supporters is, at a minimum, a step in the right direction. Still, repairing our nation will undoubtedly be a long and difficult process.

UKNow: Can you speak to the historical significance of President Trump not attending the ceremony?

Barnes: President Trump announced that he will not be attending the inauguration. This will be only the sixth time in America’s history that a president has not attended the inauguration of his predecessor, and the first time in this century.

His absence, combined with his continued claims that the election was stolen, will send powerful signals to his supporters that he continues to dispute the outcome of the election and will serve to reinforce divisions in the nation.

UKNow: Looking ahead, given the advancement of voting technology and the rate at which votes can now be counted, is it possible that in the near future we will see the “lame duck” period decrease even further?

Now, with the advancements of voting technology, the approximately two and a half-month period between the presidential election and the inauguration may seem excessive. And, of course, a shorter lame duck period may even be desirable to some. The longer the lame duck period, the longer we are governed by politicians who are not accountable to voters. Recognizing this, in a number of recent transitions, outgoing presidents have worked alongside the incoming president to ensure a smooth transfer of power.

That said, even when elections go smoothly and the loser graciously concedes, this period of time is used to facilitate a seamless transition. In a typical year, once the General Services Administration (GSA) declares an “apparent winner,” funds appropriated to facilitate the transition are released and the apparent winner begins making plans to assume the office of president. The transition involves developing the president-elect's policy agendas; preparing their schedule; and assembling their new executive branch. Although cabinet nominations receive ample media coverage, most people are less familiar with the fact that presidents are charged with filling more than 9,000 positions in the executive branch, about 1,250 of which require Senate confirmation. So, although some of the transition planning can and does take place before the November election (both candidates prepare in the event they are victorious), it would be quite unusual for a president to have every detail — e.g., all 9,000 federal civil servant positions — hashed out before winning the November election.

This to say, it is possible that the lame duck period could be decreased even further. It would, however, require another constitutional amendment. And, given the large number of responsibilities associated with the transition, some officials may see this period as necessary. Regardless, I don’t know that the issue is pressing enough to garner either a two-thirds majority vote in both the House of Representatives and the Senate or a constitutional convention called for by two-thirds of the state legislatures necessary to reform this aspect of the Constitution.

UKNow: This marks the first time a woman has been sworn-in as vice president of the United States. Politics aside, what opportunity does this event hold to inspire generations of American citizens?

Barnes: Women — and particularly women of color — have long been excluded from the most powerful and prestigious political positions in the United States.

When young girls look at a political system that does not represent them, it sends powerful signals that they do not belong in politics. In fact, research shows that among very young children, girls and boys are just as likely to believe that they would like to be president one day. Yet, as children progress through grade school, a gender gap develops, and girls become less and less likely than boys to say they would like to be the president when they grow up.

Although there are a number of factors that contribute to this gender gap, the conspicuous underrepresentation of women in U.S. politics is a likely culprit. So, simply having more women in highly visible political roles could spark more political interest among girls from a young age and inspire generations of women to consider running for political office. In fact, research shows that women political role models in high-profile positions can motivate other women to run for office, encourage civic engagement among women citizens and even enhance citizens confidence in, and satisfaction with, the government.

More generally, the United States has continued to lag behind other developed democracies when it comes to women’s representation in government. Globally, the United States ranks 87th for women’s representation in Congress. Yet, with the inauguration of Vice-President-Elect Kamala Harris and the nomination of 12 (of 25) women to President-Elect Joe Biden’s cabinet or cabinet-rank posts, the executive branch of the United States will compare favorably to our allies, like Canada and France that have promoted gender-balanced cabinets.