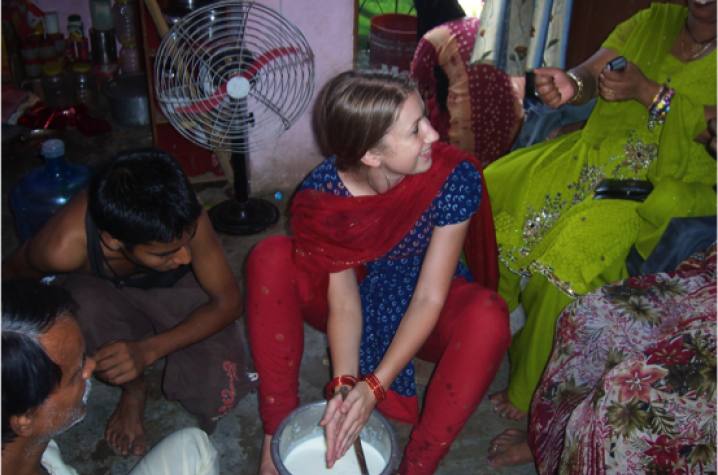 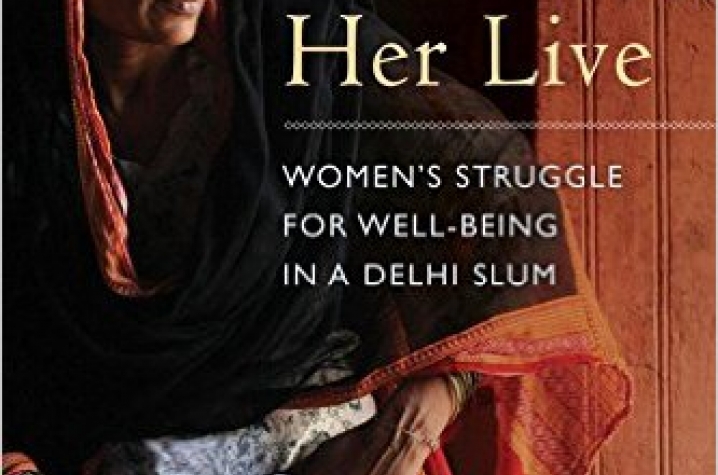 LEXINGTON, Ky. (Aug. 27, 2015) — For women living in urban slum communities of New Delhi, India, a sense of purpose and self-worth emerges despite their dependency on others.

Because of gender inequalities within the slum social system and cultural expectations, women have no choice but to bind themselves to others. As a result, they remain at the center of familial, political and social relationships throughout their lives.

“A woman is stuck with the fact that she is within all these relationships,” Claire Snell-Rood, a medical anthropologist at the University of Kentucky, said. “You just can’t be an independent woman on your own at the end of the day.”

Snell-Rood, a behavioral health researcher in the UK College of Medicine, spent 14 months in New Delhi interviewing slum women as part of her doctoral thesis research. Snell-Rood recently published her first book, “No One Will Let Her Live: Women’s Struggle for Well-being in a New Delhi Slum,” which is based on live, in-person interviews and repeated observations she conducted as part of her thesis research.

In the book, Snell-Rood tells the stories of 10 slum women who leveraged their relationships with neighbors, politicians, family members and their environment to promote their own wellbeing, as well as the wellness of their family members. She describes the complex mechanisms by which slum women set boundaries, maintain their independence and develop a sense of self-worth in a society where women are restricted from certain freedoms. Snell-Rood argues a slum woman’s sense of identity and mental health is built on endurance, self-discipline, mobility and citizenship she displays through her interactions with others.

Snell-Rood first lived in India as an undergraduate student in 2003, but only later began her research in slums. New Delhi’s urban slums are dilapidated communities lacking infrastructure and governmental support, and, with high rates of poverty and disease and poor sewage systems, are regarded as sub-standard environments for human inhabitance. In these cramped communities where even clean water is scarce, Snell-Rood discovered women serve an integral role promoting health and wellness in spite of their surroundings.

Slum women monitor social interactions within their community and strive to keep peace in their neighborhoods. Women also use relationships to obtain vital resources for their family. An example Snell-Rood describes in her book pertains to access to clean water in the community. Women often need alliances with political leaders to ensure they receive clean water from the weekly water truck.

“The book looks at four different relationships at the root of women’s vulnerability and the techniques they use to promote their wellbeing,” Snell-Rood said. “The decisions women are making in the immediate-term might not be good for their heath, but those decisions will promote their independence long-term.”

“When you look at moral reasoning in relationships, it is motivated by a long-term calculus for their overall wellbeing; it has to do with overall social security. It comes from being able to have autonomy in the family.”

On average, women living in slum families consume the fewest calories of all family members, and the least amount of medical care dollars in a home is spent on women. Many are victims of domestic violence. Even with their vulnerabilities and disadvantages, slum women serve as emotional stabilizers of families. Snell-Rood portrays this fortitude in women by describing one woman’s difficult circumstance of involuntary relocating from her home because of government-imposed demolition.

“They have ways of affirming their own worth and building whole families that will last them throughout their lifetime,” Snell-Rood said.

Snell-Rood, a scholar in the Building Interdisciplinary Careers in Women’s Health (BIRCWH) Program, is currently exploring social and cultural factors influencing treatment for women suffering from depression in Appalachia. Her work is funded by a grant from the UK Centers for Clinical and Translational Science.

"No One Will Let Her Live" was published by University of California Press.