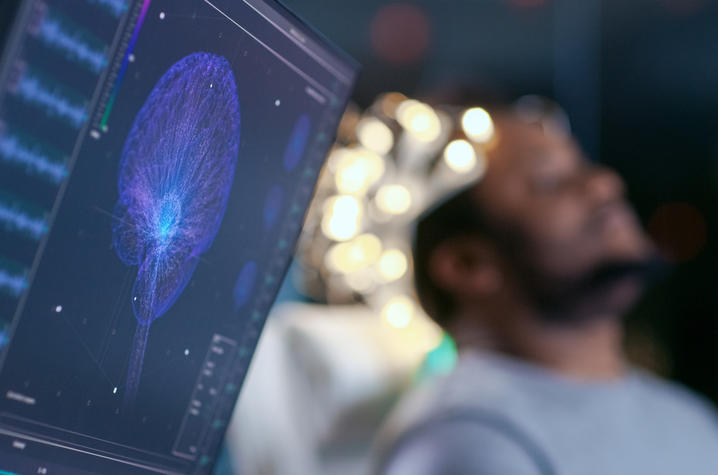 A recent study, published in the Journal of Alzheimer’s Disease, by researchers at the University of Kentucky establishes what they believe is a new way to predict the risk years before a clinical diagnosis. Their work shows that direct measures of brain signatures during mental activity are more sensitive and accurate predictors of memory decline than current standard behavioral testing.

“Many studies have measured electrophysiological rhythms during resting and sleep to predict Alzheimer’s risk. This study demonstrates that better predictions of a person’s cognitive risk can be made when the brain is challenged with a task. Additionally, we learned that out of thousands of possible brain oscillation measures, left-frontal brainwaves during so-called working memory tasks are good predictors for dementia risk,” said lead investigator Yang Jiang, associate professor in the UK Department of Behavioral Sciences and an affiliated faculty member at the Sanders-Brown Center on Aging (SBCoA).

When looking for a specific car in a large parking lot, older persons increasingly make more mistakes and take more time than young people due to brain and cognitive aging. Jiang says it has already been reported that brain waves associated with that type of daily memory task differ in cognitively normal older people and those of patients with memory loss and dementia. For this new study, researchers followed healthy older adults for 10 years. They reported that a specific pattern of frontal brainwaves during an everyday memory task predicts a person’s risk of cognitive impairment roughly five years before clinical diagnosis. This pattern was not observed in older people who remained cognitively normal over the next 10 years.

Jiang says predicting and preventing cognitive decline is very important to allow preventive measures, such as lifestyle changes, and for researchers to help achieve a greater quality of life for the rapidly growing aging population. “Compared to current methods using neuroimaging as biomarkers, this method of measuring can be easily set up in clinics, is non-invasive, fast, and affordable. Also, reliably predicting the risk of cognitive decline in an individual is new. Our  older participants will soon be able to have a better version of brainwave tests here at UK.”

The clinical and translation work of this study was a team science effort with multiple investigators from UK’s Sanders-Brown Center on Aging serving as coauthors including Erin Abner, Richard Kryscio, Greg Jicha, Fred Schmitt, Charles Smith, and collaborators from the Oak Ridge National Laboratory, University of Tennessee, and the Institute of Psychology, Beijing China.

This project was brought to SBCoA by scientists at the Oak Ridge National Laboratory co-author Nancy Munro to David Wekstein and Drs. William Markesbery and Charles Smith nearly 15 years ago with funding from the Department of Energy. The research team received funding from NIH in recent years to expand this work in large-scale and diverse populations. Jiang says their longitudinal study underscores the importance of having a successful Alzheimer’s research center at UK.