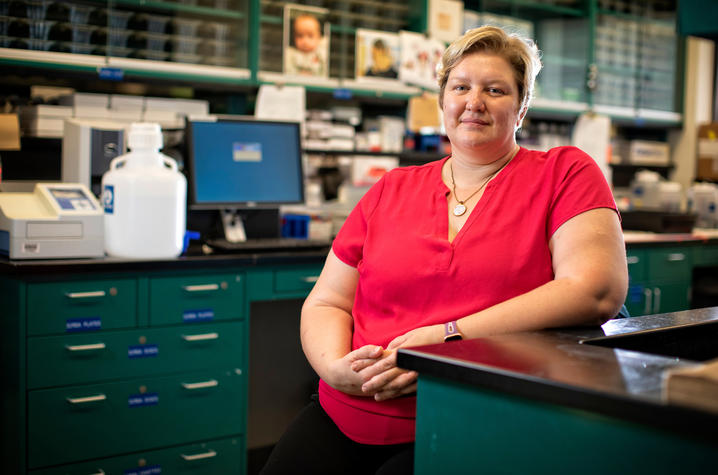 Donna Wilcock, of the Sanders-Brown Center for aging in her lab on Aug. 14, 2019 Mark Cornelison | UKphoto

LEXINGTON, Ky. (Aug. 25, 2020) — Research looking at a possible new therapeutic approach for Alzheimer’s disease was recently published in the Journal of Neuroinflammation. The paper by researchers at the University of Kentucky’s Sanders-Brown Center on Aging (SBCoA) is titled, “Therapeutic Trem2 activation ameliorates amyloid-beta deposition and improves cognition in the 5XFAD model of amyloid deposition”. The work looked at targeting inflammation by using an antibody. Alzheimer’s disease and related dementias have no disease-modifying treatments at this time and represent a looming public health crisis given the continually growing aging population.

The paper explains that current therapeutic approaches to the treatment of Alzheimer’s disease focus on the major pathological hallmarks of the disease which are amyloid plaques and neurofibrillary tangles. They are the requirements for a diagnosis of Alzheimer’s disease. However, the authors say there has been an explosion of genetic data suggesting the risk for sporadic Alzheimer’s disease is driven by several other factors including neuroinflammation, membrane turnover and storage, and lipid metabolism.

In this study, the researchers focused on triggering receptor expressed on myeloid cell-2 (TREM2). “TREM2 was identified several years ago as a gene that, when there’s a mutation, significantly increases risk of Alzheimer’s disease. The field thinks that this mutation reduces the function of the receptor, so we hypothesized that targeting TREM2 to increase its function might be a valid treatment for Alzheimer’s,” said Donna Wilcock, SBCoA associate director.

Through the group's work, they found that the therapeutic targeting of TREM2 using a TREM2-activating antibody leads to the activation of microglia, recruitment of microglia to amyloid plaques, reduced amyloid deposition, and ultimately improved cognition. “The big takeaway is that this is the first approach that targets TREM2 to promote microglia to clear the amyloid deposits in the brain that are thought to be the cause of Alzheimer’s,” said Wilcock.

The biopharmaceutical company Alector developed the antibody for this study which was conducted on mice. Due to the study’s success SBCoA is set to be a site for an upcoming clinical trial using this new approach.