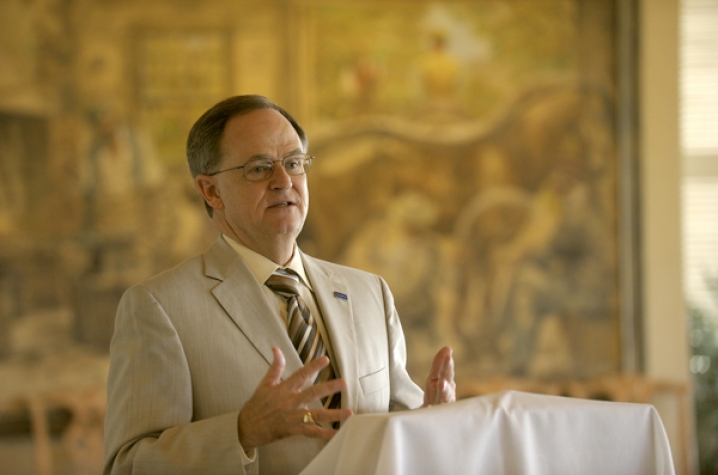 LEXINGTON, Ky. (March 7, 2011) – In many ways, Lee T. Todd, Jr. realizes one relatively short document will define his nearly 10 years as president of his alma mater, the University of Kentucky.

On the UK campus, it’s simply known as “The Business Plan.”

“It has defined my time here and it has exceeded my expectations,” Todd said recently, reflecting on the Top 20 Business Plan that he unveiled in December 2005. “When I had raised money for my company as an entrepreneur… I had to write a business plan. It helped me as much as anybody, clarify my thoughts. If I had the money, this is what I would do and this is how I could tell my investors they would benefit from that.”

It was a simple idea, but it had never been done before in public higher education -- anywhere: telling the people of the state and policy-makers in explicit terms what it would cost over the course of 15 years for UK to reach its state mandated goal of becoming a Top 20 public research institution by 2020.

The resulting plan – a 44-page document filled with charts and graphs -- achieved both national recognition and created buzz across the state. The business plan was heralded in The New York Times and The Chronicle of Higher Education, among others. A 22-city bus tour across 1,400 miles of Kentucky in the summer of 2006 – The Dream Tour – further highlighted the ambitious plan.

And, initially, it worked: the 2006 legislature eagerly funded the plan’s first installment – an increase in appropriations of $24 million over two years -- and the university began a hiring spree of faculty with the idea of expanding research and lowering classroom sizes, key components of the business plan. The addition of faculty also would pave the way for another goal of the plan – a dramatic increase in undergraduate enrollment.

But the state economy sagged. And, in 2008, the national economy fell into the deepest recession since The Great Depression. UK went from the high of additional dollars to fund its state mandate to trying to maintain progress even in the midst of a series of substantial budget cuts.

The march toward realizing dreams has been a bumpy ride, but the plan – and the goal to which it aims – continues to guide the university.

As he nears the end of his 10 years as president, UK Public Relations and Marketing sat down with Todd and others for extended conversations about his tenure – a time filled with tremendous progress for the institution, but also significant challenges resulting from a turbulent state and national economy.

This story on the importance and legacy of the Top 20 Business Plan is the first in a periodic series about UK during the Todd years. Video of Todd discussing the business plan can be viewed above or by clicking here.  Other stories will include features on undergraduate education, health care and research and athletics.

As a businessman and entrepreneur, Todd often throws out a dizzying array of numbers regarding UK’s progress and, in particular, how the Top 20 Business Plan will measure the university’s progress in four detailed areas – undergraduate education, graduate education, research and faculty quality – in exchange for prescribed levels of state funding and tuition dollars.

By virtually every meaningful measurement, the university has made considerable progress in the last 10 years, including:

·       Increasing undergraduate enrollment 11.2 percent even as the university’s retention rate has reached a record 82 percent and its graduation rate a record 61.4 percent.

·       Retention – the percentage of freshmen who move forward to their sophomore years -- has improved from 76.4 percent to nearly 82 percent – a record high.

·       Completing the institution and the state’s first $1 billion capital campaign, only the 31st higher education institution – public or private – to accomplish such a goal.

·       Overseeing the construction of the new, $570 million UK Chandler Hospital.

·       Overseeing the completion of the new UK College of Pharmacy, the largest academic building in Kentucky and among the largest in the country.

·       Making significant strides in diversity. Enrollment of African-American students has increased 33 percent since 2001. UK now has 89 African-American faculty members, up from 57 in 2001 and President Todd hired the institution’s first vice president of Institutional Diversity. And UK now has 236 women in administrative roles, up from 155 in 2001.

But more than metrics and numbers, Todd believes what may be most significant about The Top 20 Business Plan is the sense it gave people – both on campus and off – about the potential of the university and the possibility that UK’s ambitions weren’t simply unrealistic dreams, but goals that could be met with the right planning and focus.

In other words, Todd said, the plan – a concrete document with measurements and language more associated with a business boardroom than a classroom or laboratory – helped change UK’s psyche and outlook.

"I'm most proud of the fact that I really think the Top 20 plan changed the culture of the institution,” Todd said. “I've been amazed at the attitude change that it brought about and I think that it was one of the prime drivers behind a cultural change that we can compete. It's been a magnet for helping us recruit some of our very best people."

And that change reached beyond the borders of the campus and into the community. In fact, Todd suspected there might be something to his idea of a Top 20 Business Plan when he went shopping one night right after the strategic initiative was publicly released in December 2005.

“On one December evening, right after the plan was released, I stopped in two stores and one restaurant. In each place, people approached me and remarked about how the idea of a business plan for a university made sense,” Todd said. “Once we put on paper what are goals were, why there were important, and what resources we needed to make them a reality, people bought into it. For the first time, they could understand what it meant and they supported it.”

Even as budget cuts beginning in 2007 derailed plans for expansion and growth, Todd said the Top 20 Business Plan was invaluable to the campus because the institution was able to reallocate savings and dollars so  that furloughs or massive layoffs were avoided – something other peer institutions have been unable to avoid.

“We’re not there yet and we’ve had far different budget situations than we thought we would,” Todd said. “We may not be numerically where we want to be in some of these categories, but we’ve built a foundation. We’re really well positioned.”

But, as always, Todd says there’s something more important than the push for rankings and numbers.

“When I prepared for my interviews for the job, I wanted to make sure I made the point that if this institution doesn’t change the state, it doesn’t make any difference if it’s Top 20 or not,” Todd said. “We really need to look at some of these long-term problems we’ve had – from heart and lung disease to economic development and education.

"So, I was truthful in saying that if we change the state  then I’ll feel good about that and I do.”