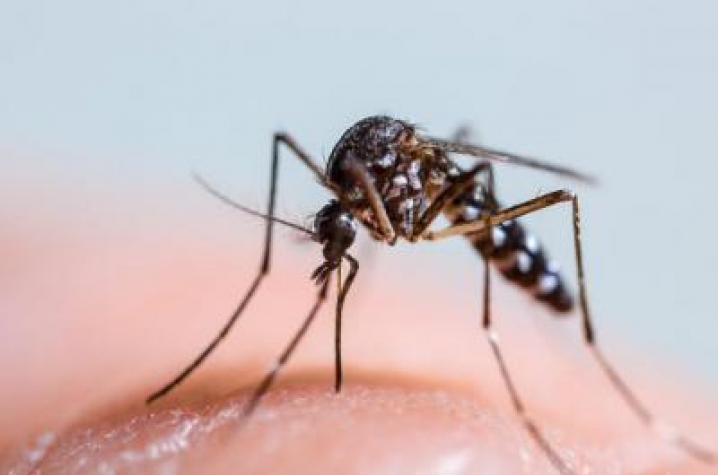 LEXINGTON, Ky. (Oct. 14, 2013) — Entomologists in the University of Kentucky College of Agriculture, Food and Environment have developed a new control method for mosquitoes. The U.S. Environmental Protection Agency recently granted a permit to begin field trials.

The biological control method targets the Asian tiger mosquito; it is the first of its kind in the nation.

“The mosquito has been labeled as one of the most important invasive species in the world,” said Stephen Dobson, professor in the UK Department of Entomology. “The traditional ways that we control mosquitoes don’t work against this mosquito.”

A native of Southeast Asia, the Asian tiger mosquito now exists throughout the United States, with particularly heavy populations in the Southeast. Kentucky has had the mosquito since the 1990s, and it is currently in every county in the state. In a separate, unrelated study conducted by fellow UK entomologist Grayson Brown, Asian tiger mosquitoes were responsible for 90 to 95 percent of the bites on test subjects in Lexington during the 2013 summer.

Asian tiger mosquitoes are an important vector of canine heartworm and transmit the virus Chikungunya, which produces similar symptoms as dengue fever. While there has not been a Chikungunya epidemic in the United States, introductions have caused epidemics in Europe, India and elsewhere. Scientists are concerned about it invading the United States, similar to the West Nile virus invasion in 1999.

Dobson developed the technology to move the bacterium Wolbachia between mosquito species. Wolbachia is a naturally occurring bacterium found in the majority of insects.

The new biological control method is based on releasing Wolbachia-infected males in a targeted area. Unlike their female counterparts, male mosquitoes do not bite or transmit disease. The males mate with females and render the females sterile.

“In laboratory and greenhouse conditions, we can eliminate a population in just over eight weeks,” Dobson said.

The technology is being field tested through a collaboration between UK and MosquitoMate, a small, start-up company in Lexington. MosquitoMate is led by Jimmy Mains, a former student in Dobson’s laboratory whose doctoral research focused on Wolbachia’s ability to control Asian tiger mosquitoes in laboratory and greenhouse settings.

“It’s exciting to participate as this technology progresses from an idea developed at the University of Kentucky, through laboratory trials and now to a real-world application,” Mains said.

Mosquito populations peaked before the researchers received the EPA permit this summer. Therefore their initial work this past summer in Lexington was limited to small-scale trials, examining male mating and flight distance in the field. This information will help guide early work next year, when researchers hope to see significant impacts on Asian tiger mosquito populations in Lexington.

While the biological control method may help cut down on the number of insecticide applications, it won’t completely replace insecticides.

“Insecticides can still be used for a quick knock down once a mosquito population is already high, but the biological Wolbachia approach started early in the season can serve to keep the population low, prevent a population explosion or even eliminate a population,” Dobson said.