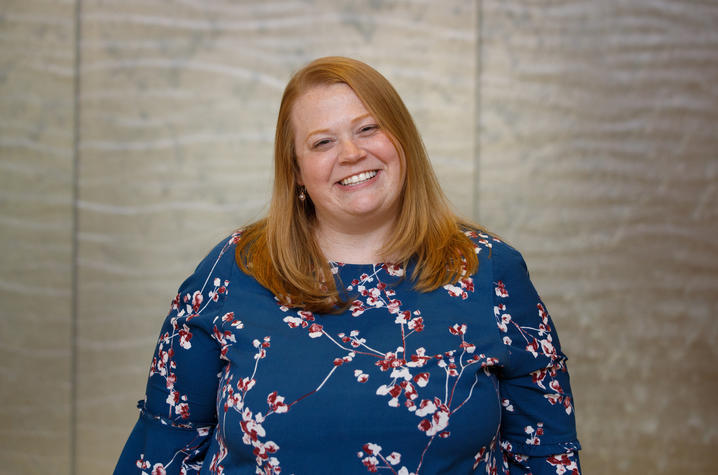 UK College of Social Work's Allison Gibson, Ph.D., is working to address a lack of information and services for people with a diagnosis of mild cognitive impairment, which often leads to dementia and Alzheimer's disease. Mark Cornelison | UK Photo.

LEXINGTON, Ky. (July 21, 2022) — In her work with the University of Kentucky Sanders-Brown Center on Aging, UK College of Social Work Associate Professor Allison Gibson, Ph.D., has noticed an array of responses when people receive a diagnosis of mild cognitive impairment (MCI). The condition, which falls beyond “normal aging” and often leads to the development of dementia and Alzheimer’s disease, causes noticeable changes in memory and thinking but doesn’t stop someone from carrying out most daily activities.

“As a country we’ve gotten very familiar with Alzheimer’s disease. People know what it is — we’ve done a good job with public health messaging, and it’s well-represented in TV and movies,” Gibson said. “But people don’t really know what it means to get a diagnosis of mild cognitive impairment.”

“The diagnosis can be really challenging. Some folks, especially women, will be really proactive and ask what they can do to try to prevent disease progression, or start making plans for the future," Gibson said. "Other folks get an MCI diagnosis and they disappear — they stop coming for appointments, stop returning our calls. Sometimes we never see them again. Sometimes we see them in six or seven years when it’s full-blown Alzheimer’s.”

She also observed a dearth of informational and supportive services to help people navigate life with MCI. So with the collaborative pilot grant from the UK Center for Clinical and Translational Science and Sanders-Brown Center on Aging, Gibson recently ran a clinical trial designed to fill those gaps and develop interventions for this population.

“In our study we offered various interventions so we could see what people liked or didn’t like, what they were receptive to, and if we got them engaged in something during the study, if they would stay engaged after the study ended. Platform-based trials are common in pharmacological studies, so we took that concept and translated it for our study to try to address biopsychosocial needs of folks with MCI,” she said.

Her study used a group-based model that included individuals with MCI plus a family member or friend as a study partner. Including a study partner helped ensure the research team received accurate information and can help prepare the study partner for a potential caregiving role in the future, should their loved one’s condition progress to Alzheimer’s disease or related dementias.

Gibson led four study groups over the course of 2020 and 2021, offering sessions on a variety of topics, like how to plan for the future (including housing needs), teach-backs on how to make the most of medical appointments, and memory strategy workshops to help people feel more prepared to run errands or go to an event. Participants also received some “homework” assignments, such as completing an advanced directive packet.

“All of the participants did that one, and they came back with tons of questions about planning for their future,” Gibson said.

She also had a pharmacist come in to discuss the importance of medication management for MCI and do individual medication reviews with each participant.

“The pharmacist was able to offer suggestions and information, like ‘Hey, did you know your cardiovascular medication is interfering with your memory medicine? Or that over-the-counter medicines can actually cancel out a lot of memory medicine?  I was surprised at how receptive the participants were. It shows they’re hungry for information and a lot of times people just don’t know where to get it.”

Through what she calls a “box of chocolates” approach of providing multiple types of interventions and using different interventionists, Gibson and the study team were able to identify what was helpful to MCI patients and what wasn’t. They found that participants especially appreciated in-person informational sessions facilitated by experts, like the medication review. Another favorite was a mindfulness class with UK physician John Patterson. M.D.

“All of our families loved that session, even though we had to do it over Zoom because of COVID research restrictions,” she said.

On the other hand, most “homework” (other than the advanced directive packet) went uncompleted, automated pill dispensers were overwhelmingly a flop, and study partner engagement proved a significant challenge. Some of the participants’ study partners were effectively non-participatory. To Gibson, the latter issue demonstrated that many people don’t have education about the relationship between MCI and Alzheimer’s/dementias, and also that many loved ones of MCI patients don’t recognize — or aren’t ready to acknowledge — that they might be in a caregiving role down the line.

Gibson is especially interested in issues of caregiving for people with MCI, Alzheimer’s and other dementias because Alzheimer’s runs in her family.

“No one has to caregive for someone. I think people who choose to do so are special people. They’re committing to this hard, difficult thing and I want to support that,” she said. “As I got into this work I realized so many people don’t have caregivers. Alzheimer’s disease is one of the most feared diagnosis for older adults, because if the disease runs its course, someone will need to be responsible for you 24/7, and no one wants to need that.”

Plus, she said, caregiving isn’t something a single person can do on their own.

“This is why I like the Sanders-Brown model, because they have social workers on staff to help families navigate challenges related to disease symptoms, caregiving approaches, or questions of how to pay for care when it’s not covered by any insurance and can cost $60,000 to $70,000 a year,” she said.

“It’s been a wonderful experience working with the CCTS, which has offered me a lot of support in terms of being new to clinical trials,” she said. “And I could not have done this project without the mentorship of Dr. Greg Jicha, the neurologist and director of clinical trials at Sanders-Brown, especially with COVID when we shut down in March 2020. Somehow we worked through it.”

Based on the findings from this study, Gibson plans to continue researching and developing interventions for people with MCI and their caregivers.

“We’ve learned so much that will inform future studies," she said. "I also want to develop workbooks for families that walk them through an MCI diagnosis — what it is, what it will mean for them. We’d like to develop one for people with the diagnosis and one to be shared with family, friends and caregivers. These sorts of materials exist for people with Alzheimer’s but we don’t really have good public resources for people with MCI. So I hope to create this with MCI participants and Sanders-Brown.”