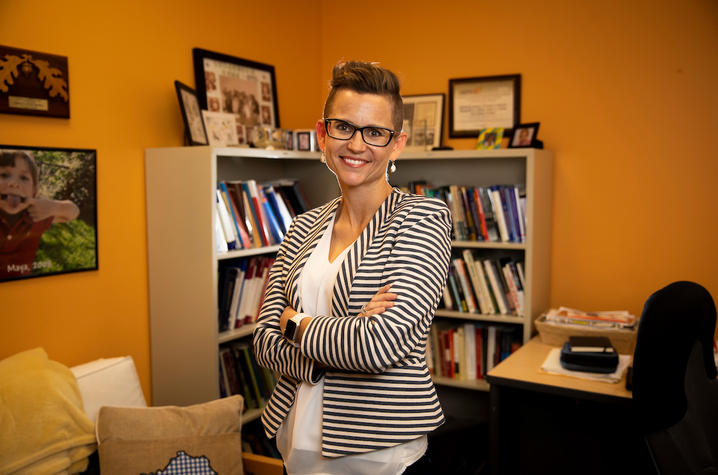 Christia Spears Brown is a professor in the Department of Psychology in the College of Arts and Sciences at the University of Kentucky. Pete Comparoni | UK Photo.

LEXINGTON, Ky. (Sept. 4, 2020) — As the COVID-19 pandemic persists, children across the country are facing social isolation. With many school districts in the U.S. choosing remote learning, students are likely to consume more mass media.

“Media images will outnumber — and may outweigh — real-life interactions with children their own age,” Christia Spears Brown, a professor in the Department of Psychology in the College of Arts and Sciences at the University of Kentucky, said. “Though boys and girls consume the same amount of media, that extra dose of media exposure may have very different consequences — slowing down ongoing progress toward gender equality.”

Spears Brown delves deeper into this topic in a new report, published by the Council on Contemporary Families (CCF), which examines the mixed signals the mass media send to girls.

“The media want kids to do what they say, not what they show,” Stephanie Coontz, CCF director of research, said “But as every parent knows, kids pay more attention to what we practice than what we preach. This research shows that ‘the talk’ may be equality, but ‘the walk’ is something else entirely.”

The report, “Media Messages to Young Girls,” examines how children learn the desirability of “looking sexy” from the mass media and how it undercuts their own self-confidence.

“For example, female characters continue to be underrepresented in the most popular TV shows for elementary school-age children. But when they are shown, they are often portrayed in a sexualized way,” Spears Brown explained. “Girls learn the rules quickly, that the way to achieve high status and popularity is to be sexy, even as they also tell them that sexy girls are not very nice, smart or athletic.”

According to Spears Brown’s research, elementary school children watch approximately four and a half hours of TV a day and see more than 75,000 examples of “sexy girl” role models a year. Such exposure to those images is likely to balloon this fall as children spend more time with media.

“And that is a big problem, because when girls prioritize sexualized attractiveness, they minimize traits they think are incompatible with sexiness, such as intelligence,” Spears Brown said.

During the study, researchers gave elementary-aged girls a “Fashion” Barbie to play with for five minutes. Afterward, they were asked about their career aspirations. Their responses were more limited than the responses of those who played with a Mr. Potato Head.

Even more troubling, children in elementary school exposed to pictures of sexualized women rate those women as less worthy of being helped when in danger than non-sexualized women.

In conclusion, Spears Brown notes that girls who buy into “sexy girl” aspirations are not responding to pressure from boys their own age — as some might assume.

“When we ask children to tell us about the sexualized girls, it is girls who recount elaborate stories about why sexualized girls are more popular and attractive. Boys in elementary school are still pretty clueless about the different implications of a girl wearing a belly shirt or a hoodie,” she explained. “In other words, this is not so much a kids’ problem as a grown-up problem. Girls are trying to live up to what the media tells them is valued in grown-up women by grown-up men.”

Based at the University of Texas at Austin, CCF is a nonprofit, nonpartisan organization of family researchers and practitioners that seeks to further a national understanding of how America's families are changing and what is known about the strengths and weaknesses of different family forms and various family interventions.

You can find more information on the “Media Messages to Young Girls” report here.

Dust Off Your Dancing Shoes and Register for DanceBlue 2021

Spring 2021 Academic Calendar Approved Without Spring Break Due to Pandemic