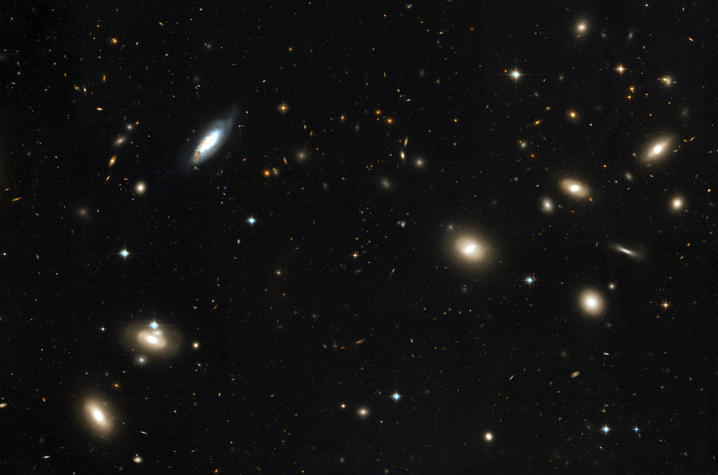 A UK postdoc and graduate student will present two separate research studies, and their groundbreaking results, at the American Astronomical Society's semiannual meeting this week in Pasadena, California. iStock / Getty Images Plus.

As the largest astronomy conference in the United States, the AAS meeting will bring together more than 2,000 astronomers, educators, students and journalists to highlight the nation’s most groundbreaking work in the fields of physics and astronomy.

“Approximately 30 works from around the world are being highlighted at the AAS press conference, representing some of the highest impact findings of this year,” said Yuanyuan Su, assistant professor in the UK Department of Physics and Astronomy and faculty mentor to Olivares and Sarkar. “Although the astronomy group at UK is very small compared with other institutes, two of our works have been selected. I am extremely impressed by Olivares’ and Sarkar’s independence and emerging expertise. I think our young scientists will have a tremendous future.”

Olivares, a postdoc in the UK Department of Physics and Astronomy, will discuss results from her project, which used images from NASA’s space-based X-ray observatory, Chandra, to study the activity of black holes at the center of galaxy clusters.

The team discovered that the interactions between super massive black holes and their host galaxies, or galaxy clusters, are remarkably similar for systems that are nearby and very distant from us. The results provide evidence that these interactions have been in place, and only evolved mildly, for billions of years.

Olivares says the findings will set critical constraints on forthcoming models and simulations of galaxies and galaxy clusters.

“Our finding, contrary to what we thought, provides strong evidence of a lack of evolution of the black hole feedback over the 8 billion years in central cluster galaxies,” she said. “This is an important piece in the puzzle that can be used to improve upcoming simulations of galaxy clusters. It also opens the door to future observations of clusters that can help us confirm if our finding holds for even more distant clusters.”

Olivares will discuss these results at 2:15 p.m. PDT Wednesday, June 15, in her briefing, titled “Black Hole Activity Is Not Evolving in Central Cluster Galaxies.” The research study, “AGN feedback in the Planck selected Clusters using Chandra observations: a detailed study of X-ray cavities,” has been submitted to the Monthly Notices of the Royal Astronomical Society of Letters. Read more here.

Sarkar, a graduate student in the UK Department of Physics and Astronomy, will present his research results at a press briefing the following day on merging galaxy clusters.

Galaxy clusters are the most massive, gravitationally bound systems in the universe. When two galaxy clusters collide, theories predict that their first contact would create a shock wave between them. For the first time, Sarkar and his team detected such an axial shock between two clusters that are about to merge.

Sarkar, who is also a predoctoral scholar with the Center of Astrophysics | Harvard & Smithsonian, says this is a very important confirmation in understanding the assembly of structures in the universe.

“With this discovery, we caught two subclusters of a galaxy cluster in a crucial early epoch of the merging process, with a strong shock between them, providing a missing link to the formation of the most massive structures in our universe,” he said.

The shock was detected using the Chandra X-Ray Observatory, in a galaxy cluster known as Abell 98, which lies more than 1,200 million light-years away from Earth. The strong shock wave Sarkar and his team detected travels at a speed of 4.5 million miles an hour between two subclusters, which is 20,000 times faster than the fastest Formula 1 cars.

Sarkar notes that catching galaxy clusters early in the merging process is very rare. Because they are millions of light years apart from each other. The axial shock waves predicted by the theory at the initial phase of their merger were never observed before. Detection of such a shock in an early-stage merging cluster was, therefore, a long-standing missing piece of the puzzle of galaxy cluster formation.

“This result is important because diﬀerent computer simulations seem to be telling us different things about what we should observe early on in a galaxy cluster merger,” Sarkar said. “Here, we have a picture of what this process actually looks like, and that can be used to inform our theoretical models.”

Sarkar will present his findings 10:15 a.m. PDT Thursday, June 16, during a briefing titled “Discovery of a Pre-merger Shock Wave in Abell 98: A Missing Piece in Building the Most Massive Structures in Our Universe.” The study, “Discovery of a pre-merger shock in an intercluster filament in Abell 98,” has been submitted to the Astrophysical Journal Letters. Read more here.

Both press briefings may be watched live on AAS Press Office YouTube channel.

The American Astronomical Society (AAS), established in 1899, is a major international organization of professional astronomers, astronomy educators and amateur astronomers. Its membership of approximately 8,000 also includes physicists, geologists, engineers and others whose interests lie within the broad spectrum of subjects now comprising the astronomical sciences. The mission of the AAS is to enhance and share humanity’s scientific understanding of the universe as a diverse and inclusive astronomical community, which it achieves through publishing, meetings, science advocacy, education and outreach, and training and professional development.

This material is based upon work supported by NASA under award number GO9-20112X. Any opinions, findings, and conclusions or recommendations expressed in this material are those of the author(s) and do not necessarily reflect the views of the National Aeronautics and Space Administration.