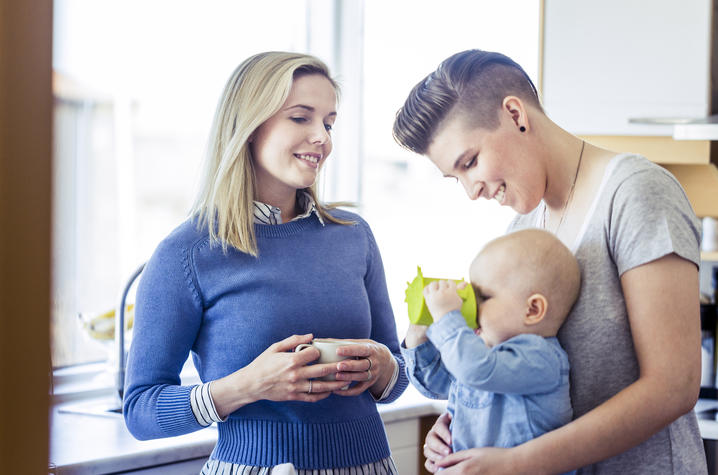 As more and more gay and lesbian adults adopt children, their parenting skills are being called into question. As an assistant professor in the Department of Psychology at the University of Kentucky, Farr has spent her academic career evaluating and answering these questions with research.

"LGBTQ (lesbian, gay, bisexual, transgender and queer) parenting and adoption are both topics that I care deeply about from personal and professional vantage points," she said. "I think it is vitally important that research efforts reflect the diversity of families in the United States, so I strive to do so in my own work."

Farr's newest findings, recently published in the Journal of Family Psychology, prove that she is enthusiastic and committed to promoting diversity and inclusion. "I remain excited about this line of work, because science can represent a tool for advocacy."

Farr previously reported that children adopted by lesbian, gay and heterosexual parents are well-adjusted over time. Her most recent study, co-authored by doctoral students Sam Bruun and Kyle Simon, focuses on these same adopted children but goes a step further.

"Family conflict within heterosexual parent families is linked with children’s developmental outcomes. However, this topic has not been studied among families with lesbian and gay parents, nor among families with adopted children," Farr explained. "I wanted to learn how not only behavioral outcomes, but also how outcomes specifically related to adoption, might connect with family conflict behaviors."

Farr's study focused on a longitudinal follow-up of nearly 100 adoptive families with school-age children as they matured from early to middle childhood and found no differences among families with lesbian, gay and heterosexual parents in either family conflict behaviors or child outcomes.

Ultimately, her findings contrast with the notion that adopted children, with heterosexual or same-sex parents, are at risk for behavioral difficulties — particularly externalizing problems such as aggression. In addition, these children generally felt positively about being adopted.

"This is noteworthy, given emphasis among developmental and family scientists to ensure that children have positive models for conflict resolution."

When asked why her latest findings are significant, Farr said, she hopes empirical evidence will move public debate forward and inform policy, practice and law.

While Farr relies heavily on facts and figures, the driving force behind her research comes from a heartfelt place. She wants others to understand, "At the heart of the matter are the thousands of children in the United States who are currently awaiting placement in permanent adoptive families. There is no empirical evidence indicating any reason that prospective adoptive parents should be categorically barred or limited from adopting on the basis of sexual orientation."