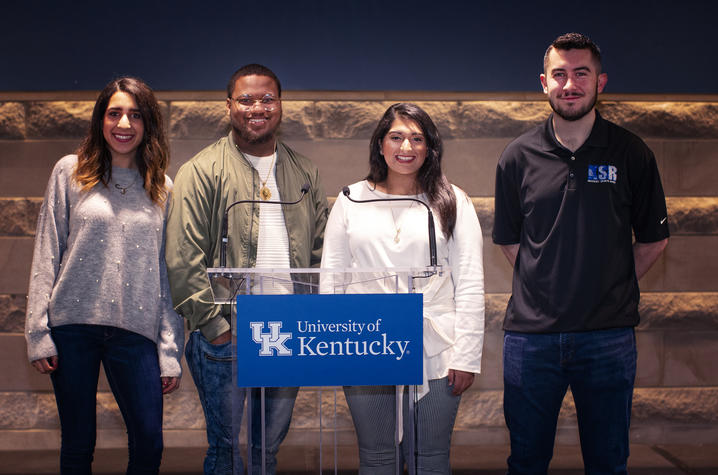 LEXINGTON, Ky. (May 2, 2018) — Per University of Kentucky tradition, UK President Eli Capilouto has selected student representatives to speak at each of the four UK Commencement Ceremonies. The ceremonies will be held Friday, May 3, and Sunday, May 5, in Rupp Arena.

The four student speakers are:

Colbert, from Louisville, Kentucky, will speak at the 10 a.m. ceremony on May 3. He is graduating with a bachelor's degree in communication from the UK College of Communication and Information.

During his time at UK, Colbert has interned with the UK Office for Institutional Diversity, was founding chairperson for The Black Collective and is the current vice president for UK's Black Voices Gospel Choir. He currently works as the social justice educator for UK's Bias Incident Support Services, where he develops programming centered on social justice issues that creates conversations for cultural awareness and consciousness. Last month, he received the Office for Institutional Diversity's Inclusive Excellence Award in the undergraduate student category.

In addition to these positions, Colbert also serves on various committees for the university including its Equal Opportunity committee, Diversity History committee and 70th Year of Integration planning committee. Outside of UK, Colbert serves as one of Kingdom Land Baptist Church's associate ministers (formerly director of youth ministries) and is also an associate minister at Growth Point Church.

In his speech, Colbert says he was guided to the realization that he is no longer the same person he was before coming to UK. For that reason, he decided to make the theme of his speech about change.

“From the very first moment I stepped into my freshman year residence hall, I was changed,” he said. “I’ve literally watched myself go from a student, to a student-leader, to a student affairs professional, all while here at the university."

After officially receiving the news from UK President Eli Capilouto that he was selected to speak at his Commencement ceremony, Colbert says he was both elated and humbled.

"It's been my dream all four years to speak at graduation, and it's finally happening!" he said.

Winkler, from Irvine, Kentucky, will speak at the 2 p.m. ceremony on May 3. He is graduating with a bachelor's degree in business management from the UK Gatton College of Business and Economics with a minor in political science. He is also a student in the Lewis Honors College.

Winkler is a Singletary Scholar and a member of Phi Kappa Phi honor society. During his time at UK, he has served as a student ambassador for the Lewis Honors College.

Outside of campus, Winkler volunteers as a finance intern for Special Olympics Kentucky, and is an intern writer for Kentucky Sports Radio in Lexington.

Winkler says he hopes his fellow graduates leave UK with the same pride he feels for his university and home state.

"Whether they were born and raised here like me, or had never set foot in the Bluegrass prior to their freshman year, we all share in the heritage of this great state," Winkler said. "And besides the chance to be under the bright lights in Rupp Arena, I just wanted to give thanks for everyone who made my time here special and to share the love that I have for this state and its people. When I came here four years ago, I was still just a small town southeastern Kentucky kid. Now, thanks to all that I've learned and the people I've met along the way, I feel prepared to go find success anywhere in the world."

After graduation, Winkler plans to pursue a master's degree in management studies at Duke University. But he says UK fans shouldn't worry.

"If you see a guy rocking Kentucky blue at Cameron Indoor Stadium next year, you know who it is."

Ali, from Pikeville, Kentucky, will speak at the 10 a.m. ceremony on May 5. She is graduating with a bachelor's degree in health, society and populations with a minor in Arabic and Islamic studies from the UK College of Arts and Sciences.

While at UK, Ali has served as a senator and student body vice president for UK's Student Government Association (SGA). She also served as executive coordinator of SGA's Leadership Development Program, planning events and seminars for over 40 freshmen leaders at UK. Ali is also the diversity and inclusion coordinator for UK's Leadership Exchange program and a member of Kappa Kappa Gamma sorority.

During her speech, Ali hopes her fellow graduates take away that life is all about stages, but through each stage they should surround themselves with those who love and care about them.

"This speech is all about those who have helped me get to where I am, and to those people who told me I would never be where I am," she said. "I have been blessed to get a platform where I can look at my peers and their families and tell them from the deepest part of my heart how important they are to me. My time at UK has taught me that no time is ever enough, but we should use every second of what we are given with a smile on our face surrounded by the people we love."

After graduation, Ali plans to attend medical school and ultimately start a nonprofit organization that helps to supply professional health care and education in areas of high risk.

"I plan to give to the world and help as many people as I can," she said. "We are a community and it is our duty to make sure everyone is doing well, mentally and physically."

Gonzalez Schuler, from Margarita Island, Venezuela, will speak at the 2 p.m. ceremony on May 5. She is graduating with a bachelor's degree in chemical engineering from the UK College of Engineering. She has also earned a certificate from the college's Power and Energy Institute of Kentucky (PEIK).

During her time at UK, Gonzalez Schuler has served as public relations chair for the UK Society of Women Engineers, and founded the UK chapter for the Society of Hispanic Professional Engineers, in which she currently serves as president.

Gonzalez Schuler has also obtained research experience as an undergraduate, serving as a research assistant in the UK Department of Chemical and Materials Engineering and completing an REU (Research Experience for Undergraduates) at UK. She has won various awards in her field, including first place at the American Institute for Chemical Engineers (AIChE) 2018 National Conference's student poster competition.

Outside of UK and her studies, Gonzalez Schuler volunteers at Cardinal Valley Elementary’s after-school science program.

"My experience is an example (to my fellow graduates) that sometimes you have to take a leap of faith and trust that you are meant to do something in this world," she said. "I am very excited because my parents are flying all the way from Venezuela for graduation, and I felt this speech would be a perfect moment for them also to see how far I have come, and how their support and sacrifices allowed me to succeed these past few years."

She says her time at UK has been a journey of opportunity and growth, where every day she was challenged to be better and improve. That journey has shaped her into the person she is today.

"I just hope that I am an example to people in my country," she said. "Although we are going through a difficult time, I want them to just believe in themselves and work hard for their dreams — even if it means leaving your family hundreds of miles away.”

For her fellow graduates, she wants to share two important lessons she has learned.

“Never underestimate yourself, and aspire to inspire."

After graduation, Gonzalez Schuler will be attending Northwestern University to pursue a doctorate in chemical engineering.