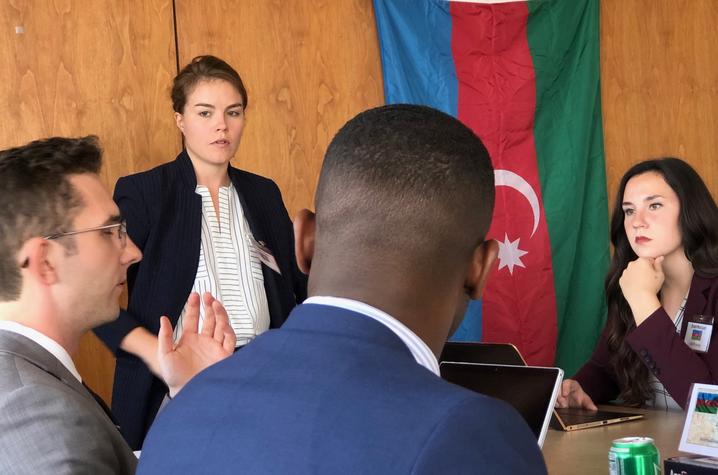 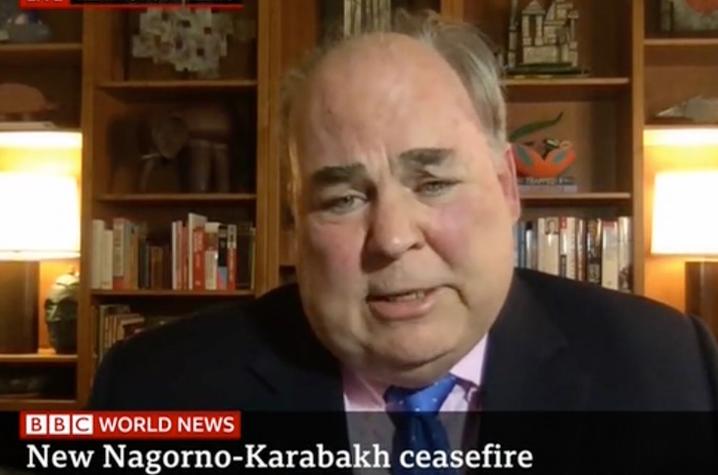 LEXINGTON, Ky. (Dec. 10, 2020) — When conflict erupted between the countries of Armenia and Azerbaijan over the region of Nagorno-Karabakh this autumn, it was a moment of déjà vu for many University of Kentucky students in the Patterson School of Diplomacy and International Commerce.

Each year, as part of the Patterson School’s co-curricular activities, the school conducts a major two-day conflict negotiations exercise in partnership with the U.S. Army War College.

The Army sends a team of officers to the UK campus from their base in Carlisle, Pennsylvania, and the Patterson School contributes a selection of diplomacy experts and retired U.S. ambassadors to the cohort. These experts serve as advisors to student teams as they learn the challenge of multilateral diplomacy and the ins and outs of advancing peace settlements.

For this activity, the Patterson faculty always select an actual unresolved international conflict, and last year, they chose the dispute over Nagorno-Karabakh — having no idea it would end up escalating this year.

“Nagorno-Karabakh is a disputed territory in the Caucasus region that lies within Azerbaijan but is predominantly ethnically Armenian and is backed by the Armenian government,” said student Logan Fogle, who participated in last year’s simulation. “Azerbaijan refuses to recognize Nagorno-Karabakh as anything other than part of Azerbaijan, despite the fact the Nagorno-Karabakh has declared itself an independent republic.”

“The negotiation simulation is an excellent example of what sets the Patterson School apart from more orthodox educational experiences,” said Ben Jones, who graduated this semester. “Nagorno-Karabakh is a real-life conflict that few of us had much knowledge about going into that weekend. Rather than simply learn about the history of the conflict and sticking points in negotiation during a classroom lecture, students were able to engage with the topic firsthand.”

After the exercise, the students also had the opportunity to engage with diplomats at the Embassy of Azerbaijan in Washington, D.C. as part of a co-curricular visit focused on Middle East politics.

That experiential knowledge became more valuable than anyone ever expected this semester, as major hostilities erupted over Nagorno-Karabakh, with thousands of soldiers and civilians killed and more than 100,000 people displaced.

Many of the students from that course were taking a seminar on mediation and conflict resolution taught by retired U.S. Ambassador Carey Cavanaugh, who worked at the State Department for many years as a peace mediator on a range of conflicts, including Nagorno-Karabakh, before joining the Patterson School faculty in 2006. The 44-day war broke out the second day the class met, helping to shape students’ learning experience for the entire semester.

Cavanaugh explained that as his seminar would explore issues like establishing ceasefires or the impact of bias mediators, developments on the battlefield and in key world capitals fed directly into their discussions.

“One week after another — as Russian President Putin, French President Macron, and Secretary of State Pompeo tried and failed to stop the fighting in Nagorno-Karabakh — the class dissected and analyzed their diplomatic maneuvering,” Cavanaugh said.

The students also followed in real-time the incredible destruction and rising loss of life, learning about the lethality of modern weaponry and the future of warfare. This semester, the seminar also examined tensions between Greece and Turkey, the resolution of the two Balkan wars, Northern Ireland’s Good Friday Accords, and Colombia’s peace agreement

“Ambassador Cavanaugh is a great person to teach this course because he has been in the field mediating deadly conflicts,” said Fogle. “He is always reminding us of the human toll these conflicts have, and why it is important to relentlessly pursue peace.  We discuss mediation techniques and strategies, so if any of us find ourselves mediating a hot conflict we will understand things that work and don't work and will hopefully be cool under pressure.”

“These Patterson School co-curricular activities open windows for our students to better understand not only war and peace, but how diplomacy can work to protect human life,” Cavanaugh said. “As future leaders in international affairs, these are invaluable lessons for our graduates to take with them as they leave the University of Kentucky and embark on professional careers in government and the nonprofit sectors.”

During the fighting, Cavanaugh was contacted daily by media outlets spanning the globe for comment and analysis. Once again, these interactions presented students with a unique learning opportunity.

“From the New York Times and Washington Post to the BBC, The Guardian, Le Monde, and Moscow newspapers, they are discovering how academic expertise — through interviews and op-eds — can help shape the discussion and potentially influence the process of diplomacy.  I have no doubt this will be an indelible academic experience for all of them,” Cavanaugh said.