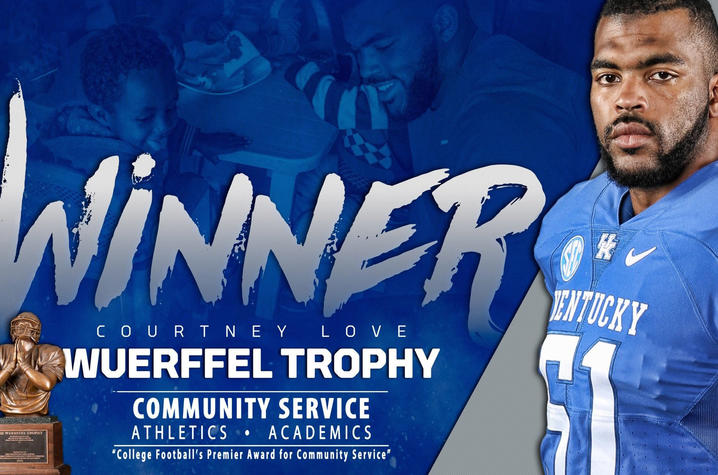 The Wuerffel Trophy, known as “College Football’s Premier Award for Community Service,” is presented annually by the All Sports Association in Fort Walton Beach, Florida. Named after 1996 Heisman Trophy winning quarterback Danny Wuerffel from the University of Florida, the Wuerffel Trophy is awarded to the FBS (NCAA Division I Football Bowl Subdivision) player that best combines exemplary community service with athletic and academic achievement.

Love, a native of Youngstown, Ohio, leads the team in community service hours and has a passion for mentoring children, especially those living in a one-parent household or children who have parents who are incarcerated. Because of his passion, he currently volunteers at Amachi Central Kentucky, a mentoring program that seeks to pair caring, positive adults with children and youth in the Bluegrass who have one or both parents in state or federal prison or are affected by incarceration in some way.

He also has served in a Skype mentoring program with area high school students, and has taken part in many events with Kentucky Children's Hospital, Read Across America and Special Olympics, along with many other service activities. In May of 2016, Love was chosen to participate in a service/educational trip to Ethiopia, where he helped build houses as well as shoe-shining boxes for men to be able to work and provide for their families. He also delivered food to impoverished families and visited with orphans and widows.

In the classroom, Love was named to the 2016 SEC (Southeastern Conference) Academic Honor Roll, graduating in May with a degree in community and leadership development from the UK College of Agriculture, Food and Environment. He is currently working on a second degree in communication in the College of Communication and Information. He also serves as one of UK football’s Student-Athlete Advisory Committee (SAAC) representatives for the second straight season.

On the field, he ranks second on the team in tackles with 82 and has started and been a captain in all 12 games. He is tied for 23rd nationally in fumble recoveries with two and has posted a career-high in tackles twice with 10 vs. University of Missouri and University of Louisville.

The Wuerffel Trophy is a member of the National College Football Awards Association (NCFAA), which encompasses the most prestigious awards in college football. The 23 awards boast more than 800 years of tradition-selection excellence. Visit www.NCFAA.org to learn more.