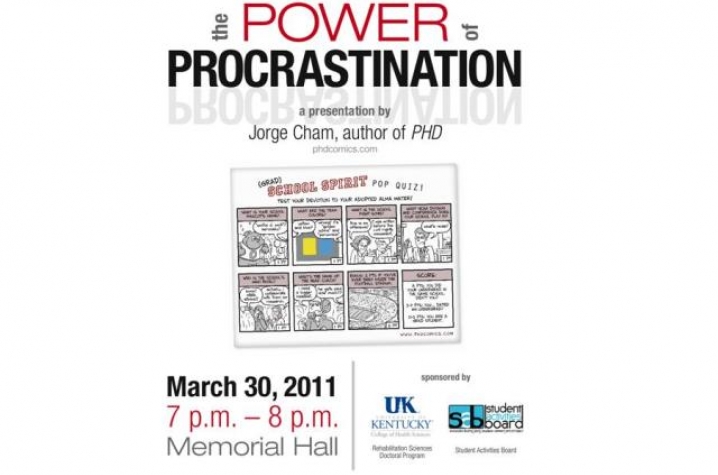 LEXINGTON, Ky. (March 28, 2011) — If there is one skill all college students have mastered it is likely the ability to procrastinate. But don’t put off coming to hear Jorge Cham, author of Ph.D. Comics, present “The Power of Procrastination” at 7 p.m. on Wednesday, March 30, at Memorial Hall on UK’s campus. This event is free and sponsored by the Student Activities Board (SAB) and the UK College of Health Sciences Rehabilitation Sciences Doctoral Program.

Cham is the creator of the “Piled Higher and Deeper” (Ph.D.) comic strip where he shares the humorous experiences about life (or lack there of) as a grad student. His lecture “The Power of Procrastination” talks about how he created the comic strip and examines anxieties grad students have to face. Cham explores the guilt and myths associated with procrastination and argue that it is actually a good thing in many cases. He has spoken at over 80 major universities including Massachusetts Institute of Technology, Harvard University and Stanford University.

“This event is particularly exciting because it addresses our graduate student population specifically, something that was requested from students on our survey,” says Amanda Rambo, director of SAB’s Cultural Arts Committee. “If you are a grad student, a recovering grad student or a graduate student to be, some of Cham’s punch lines will have you rolling on the floor or possibly may give you nightmares. Either way this event will be memorable!”

Tickets to this event are free. Pick up tickets at the Student Center Ticket Office or at the doors on the night of the event. Cham’s books will be on sale at the event and he will be signing books after the presentation. The Student Activities Board (SAB) brings more than 100 events to the University of Kentucky annually that enhance the college experience by providing students, other members of the campus and the Lexington community with entertaining, educational or enriching programs that are reflective of contemporary issues and trends. Connect with SAB at http://www.uksab.org, follow us on Twitter at http://twitter.com/UKSAB or like us on Facebook at http://www.facebook.com/UKSAB For more information about SAB and SAB events, contact publicrelations@uksab.org or text a question beginning with SABQ, followed by your question or comment, to 411-247.