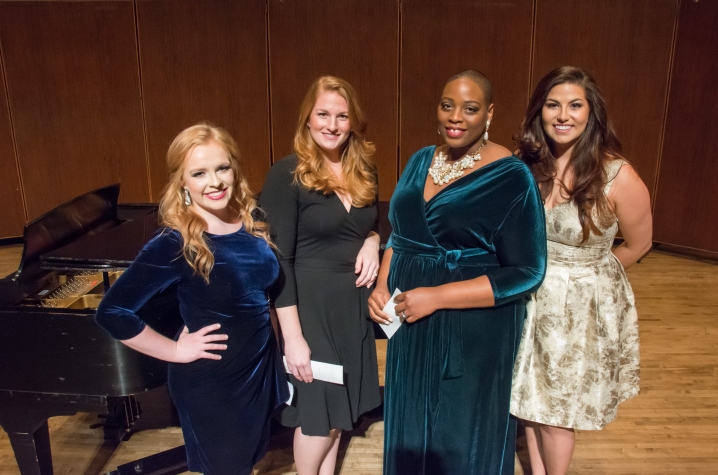 The two UK Opera Theatre sopranos are still in the running to sing on the Metropolitan Opera stage, and their next audition will be at the Mid-South Regional round of auditions being held Feb. 6, 2015, at the Germantown Performing Arts Center in Germantown, Tennessee. Joining them will be fellow district winners Nicolette Book, a student at University of Cincinnati College-Conservatory of Music, and Ashley Dannewitz, of Charleston, West Virginia. Traditionally, only one singer from each regional round will advance to the national semi-finals in New York.

Soprano Shareese Arnold, of Sheffield, Alabama, has several opera production credits. Prior to coming to UK, she had performed the title roles of "Suor Angelica" with Converse Opera Theatre and "Madama Butterfly" at Indiana University, as well as Marschallin in "Der Rosenkavalier," Agathe in "Der Freischütz," Bess in "Porgy and Bess" and the Sorceress in "Dido and Aeneas" with Converse College. In addition to opera, Arnold is an avid performer of sacred works and song recitals. She was a featured soloist in Johannes Brahms' "Ein Deutches Requiem" and Benjamin Britten’s "World of the Spirit" while at Indiana. Arnold is also a recipient of the Ursula Springer Endowment Award from the Wagner Society of New York.

Kentucky audiences will remember Arnold from her performance as Donna Anna in "Don Giovanni." Arnold, who holds a bachelor's degree from Converse College and a master's degree from Indiana University, is a previous recipient of the Encouragement Award at the Kentucky District Auditions. She currently studies with Cynthia Lawrence, professor of voice and Endowed Chair of Vocal Performance at UK School of Music.

A native of Lexington, soprano Mary Catherine Wright was the first-place winner of the 2012 Alltech Vocal Scholarship Competition. In November 2014, she was also an Encouragement Award winner at the Kentucky District Auditions of the Metropolitan Opera National Council District Auditions. Most recently, Wright traveled to Prague to perform Zerlina in "Don Giovanni" at the Estates Theatre in July. Wright made her made her professional debut as Nuria in Osvaldo Golijov's "Ainadamar" in April 2015 with the Lexington Philharmonic and UK Opera Theatre. She is a past recipient of first place honors in both the musical theatre and classical divisions of regional and divisional NATS (National Association of Teachers of Singing) competitions, first place at the Peterson Undergraduate Vocal Competition in November 2014, and a national finalist at the Classical Singer Conventions in New York and California.

Kentucky audiences will remember Wright in such roles as Olympia in the "The Tales of Hoffmann," Johanna in "Sweeney Todd," the Princess in UK's premiere of "Little Nemo in Slumberland" and Suor Genovieffa in "Suor Angelica." She is currently covering the role of Despina in Wolfgang Amadeus Mozart's "Cosi fan tutte." Wright studies with Everett McCorvey, director of UK Opera Theatre and the OperaLex Endowed Chair in Opera Studies.

The highly acclaimed UK Opera Theatre program is part of the UK School of Music at the UK College of Fine Arts. For more information on the program, visit online at http://finearts.uky.edu/music/ukot.

The Met holds the auditions to discover new talent and to search for possible participants in the Lindemann Young Artist Development Program. The Lindemann program, designed to nurture the most talented young artists through training and performance opportunities, provides financial aid together with supervised artistic direction to the young artists.

The district level is the first stage of the three-tiered audition process, and contestants can choose to compete in any district regardless of their place of residence. There is no set number of singers to advance to compete in the regional with roughly 1,500 singers participating each year in the 16 regions across the country. Regional finals for this area include participants from the Kentucky, Arkansas, Middle/East Tennessee, North Alabama and West Tennessee/Mississippi districts. Winners at the regional level advance to the National Council Auditions Semi-Finals in New York in the spring. Only eight to 10 singers are selected as national finalists and perform in the Winners Concert at the Met.