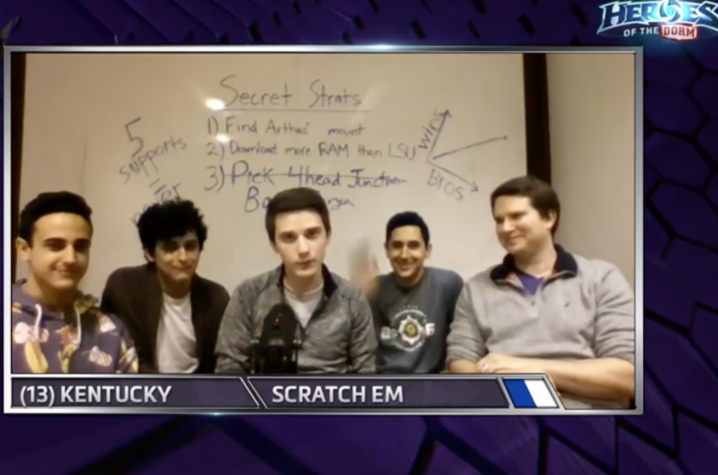 Undergraduates from the University of Kentucky will go head to head with LSU this Saturday in the international video gaming tournament centered around the popular online game "Heroes of the Storm."

LEXINGTON, Ky. (April 7, 2017) — A team of University of Kentucky undergraduates has advanced to the semifinals of "Heroes of the Dorm," an international video gaming tournament centered around the popular online game "Heroes of the Storm."

The team, aptly named "Scratch Em," will go head-to-head with Louisiana State University's team at the Heroic Four competition this Saturday, April 8, at the University of Nevada, Las Vegas.

Heroes of the Dorm is a free-entry tournament open to college students in the United States and Canada. Eligible teams consist of five to six participants who attend the same school. Over 200 teams registered to compete in this year's tournament, each vying for an opportunity at the grand prize — a three-year, full tuition scholarship.

Progressing to the semifinals is a tremendous accomplishment for the team. Joining them in the Heroic Four are teams from three of the biggest powerhouses in collegiate eSports: Louisiana State University, University of California, Irvine, and 2016 Heroes of the Dorm runners-up, University of Texas at Arlington.

For both the Pinas and the Ditterts, gaming has been a longtime hobby. Team captain Mike Dittert recalls the impact gaming had on his childhood.

"I come from a family of eight children, and with such a large age gap, we didn't have much in common," he said. "Games of all kinds remedied this issue and allowed us to spend quality time together that I wouldn't trade for the world."

John Pina, who was also a member of UK's 2016 Heroes of the Dorm team, describes this year's competition as the opportunity of a lifetime.

"Regardless of the outcome, getting this far has been an incredible experience and something that we can talk about as a family for the rest of our lives," he said.

The final rounds of Heroes of the Dorm will take place this Saturday at University of Nevada, Las Vegas' Cox Pavilion. Fans can watch the action from home, as Heroes eSports will stream the event exclusively on Facebook Live.