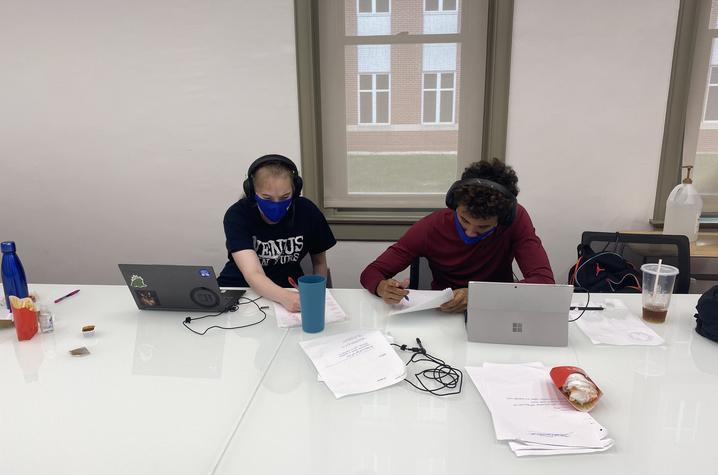 The team of Lauren McBlain and Marcus Williams prepare for the JW Patterson Open Debate Tournament held at UK.

LEXINGTON, Ky. (Oct. 15, 2021) — The University of Kentucky Intercollegiate Debate Team, housed in the College of Communication and Information, recently competed at the virtual 2021-2022 debate season opener hosted by Northwestern University.

Nearly 300 students from 38 schools across 20 states competed in the four-day event. The topic for the season opener was “Resolved: The United States federal government should substantially increase prohibitions on anticompetitive business practices by the private sector.”

After the opener, the UK Debate team continued a busy and successful start to the season by both hosting and competing at two tournaments. First, they hosted the 50th “Run for the Roses” where only the top seven teams in the nation are invited. Kentucky joined an elite field that included Harvard, Kansas, Emory, Northwestern, Michigan and the University of Southern California.

The UK team of David Griffith and Jordan Di finished with a very strong 3-3 record.

Next, the team hosted the JW Patterson Open where more than 100 teams from across the country competed. The UK team of Lauren McBlain and Marcus Williams reached the round of 32 before losing to the eventual tournament champion from Michigan.

The team now readies for their next competition, the virtual Harvard Invitational held Oct. 29-31.

“It’s always a busy start to the season between hosting and competing, and we’ve managed to do a good job across the board,” said UK Debate Director David Arnett. “We’ve had three different partnerships in the elimination rounds of national tournaments and that shows the kind of depth we’re always striving for year in and year out.”