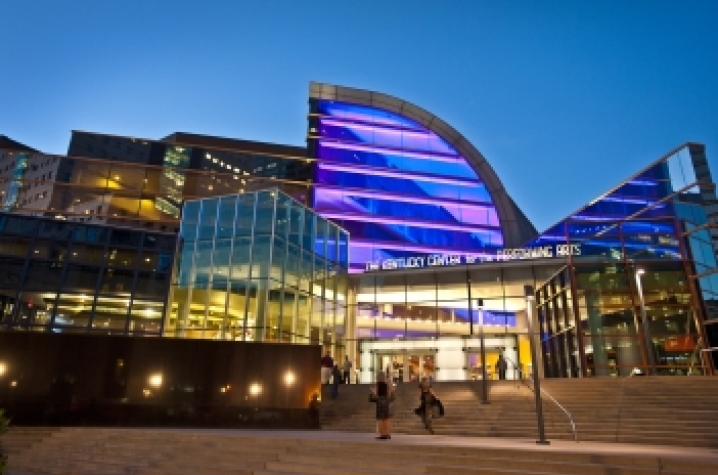 LEXINGTON, Ky. (May 22, 2014) — Rare footage, oral histories and commentary from notable Kentuckians will chronicle the story of the Kentucky Center for the Performing Arts in a new documentary airing on KET (Kentucky Educational Television). “A Kentucky Treasure: A Center For All,” created by Joanna Hay with oral history interviews from the Louie B. Nunn Center for Oral History at the University of Kentucky Libraries, will take viewers on a journey examining the artistic legacy of the Commonwealth’s first and largest performing arts center.

The documentary recounts the initial founding and opening of the Kentucky Center in 1983 through interviews with numerous civic, business and government leaders, many of whom were directly involved with its inception and development more than 30 years ago. Oral historians lend unique behind-the-scenes perspectives to the film, and footage and images from Nov. 19, 1983, transport viewers back to the center’s opening night.

The half-hour documentary was commissioned as part of the Kentucky Center’s 30th anniversary.

Home to many of Louisville’s major arts organizations, the Kentucky Center for the Performing Arts brings the finest in music, dance, theater and more to Kentucky. The Kentucky Center aims to provide artistically diverse performances of the highest quality and serves Kentucky through education and initiatives, which expand and diversify audiences while enhancing their understanding, appreciation and support for the arts. The center also strives to challenge, stimulate, and entertain while operating in a fiscally responsible manner and acting as an economic and cultural catalyst for the Commonwealth.

UK Libraries’ Louie B. Nunn Center for Oral History is recognized around the world as a leader and innovator in the collection and preservation of oral histories. The more than 9,000 histories in the center’s collection provide a unique look into Kentucky and American history and represent an irreplaceable resource for researchers today and generations from now. To learn more about the Louie B. Nunn Center for Oral History, visit the center online at www.nunncenter.org or www.uky.edu/libraries/nunncenter.