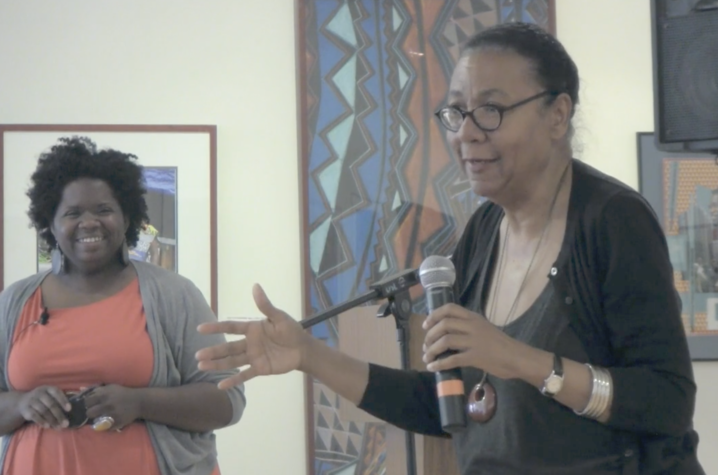 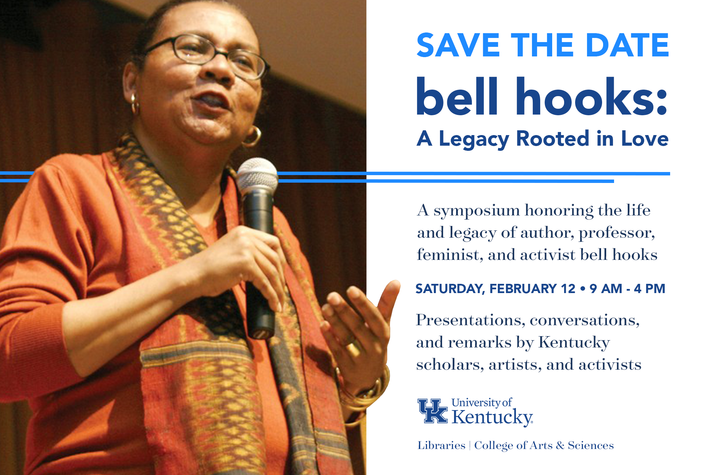 Traditionally, the medallion recipient is honored at the UK Libraries Spring Gala event, but due to the COVID-19 pandemic, hooks will be commemorated through UK Libraries and College of Arts and Sciences’ Feb. 12 symposium, “bell hooks: A Legacy Rooted In Love.”

“It is an honor for University of Kentucky Libraries to join the UK College of Arts and Sciences in celebrating the profound legacy of bell hooks,” said Doug Way, dean of UK Libraries. “Throughout her life, hooks embodied the mission of the Medallion for Intellectual Achievement through her writing, teaching and community engagement. hooks’ words and ideas have inspired, and will continue to inspire, generations of students, scholars and activists in the Commonwealth and around the world.”

Throughout the event, scholars, artists and activists from across the state of Kentucky will present and engage in conversations that celebrate and reflect on hooks’ work and its impact on literature and critical thought. Featured speakers include:

Created in 1990 and considered one of UK’s most prestigious awards, the Medallion for Intellectual Achievement honors a Kentucky resident whose accomplishments represent the pinnacle of education and creative thought in the fields of science, literature, art and philanthropy. Medallion recipients are determined by the UK Libraries National Advisory Board after receiving nominations from the public.

bell hooks was born in Hopkinsville, Kentucky, in 1952 as Gloria Jean Watkins, choosing the pen name bell hooks. hooks graduated from Stanford University in 1973 and went on to receive her master’s from University of Wisconsin-Madison in 1976 and her Ph.D. from University of California, Santa Cruz, in 1983.

hooks authored and published over 30 books of poetry, fiction and critical essays examining the intricate connections between sexism, racism and economic disparity. Among hooks’ prolific works include 1981’s “Ain’t I a Woman? Black Women and Feminism,” 2000’s “All About Love: New Visions” and 2012’s “Appalachian Elegy: Poetry and Place.”

Throughout her career, hooks also served as an instructor in higher education, teaching at the University of Southern California, Yale University, Oberlin College, the City College of New York and, most recently, Berea College.

hooks was Professor in Residence in Appalachian Studies at Berea College from 2004 until her passing in December 2021. In 2014, she founded the bell hooks Institute at Berea College, which documents hooks’ life and work through art and other artifacts.

hooks garnered several prestigious recognitions over the years, including the American Book Award from the Before Columbus Foundation for “Yearning: Race, Gender, and Cultural Politics”, the Writer’s Award from the Lila-Wallace-Reader’s Digest Fund, an Image Award nomination from the NAACP for “Happy to Be Nappy” and a Children’s Book of the Year designation from Bank Street College for “Homemade Love”. hooks was also inducted in 2018 into the Carnegie Center Literacy & Learning’s Kentucky Writers Hall of Fame, which recognizes writers “whose work reflects the character and culture of our Commonwealth.”

“The nomination of bell hooks in 2020 was a perfect reflection of the ideals associated with the Medallion for Intellectual Achievement, including national and international recognition, a remarkable body of work spanning a lengthy career, dedication to craft and lively creative vision,” said Gail Kennedy, president of the UK Libraries National Advisory Board.

“Dr. hooks was, and is, a scholar, writer and strong voice at the intersection of race, class and gender in America,” Kennedy added. “She chose to return to Kentucky some 10 years ago, to Berea College, where she completed her life and her life’s work. In the words of one of her nominators, ‘She writes for two to three hours every morning, searching for ideas that will make the world better, and change the lives of her readers.’ In all these ways bell hooks exemplifies the essence of the University of Kentucky Libraries Medallion for Intellectual Achievement.”

For a full list of past recipients of the UK Libraries Medallion for Intellectual Achievement, visit https://libraries.uky.edu/awards.