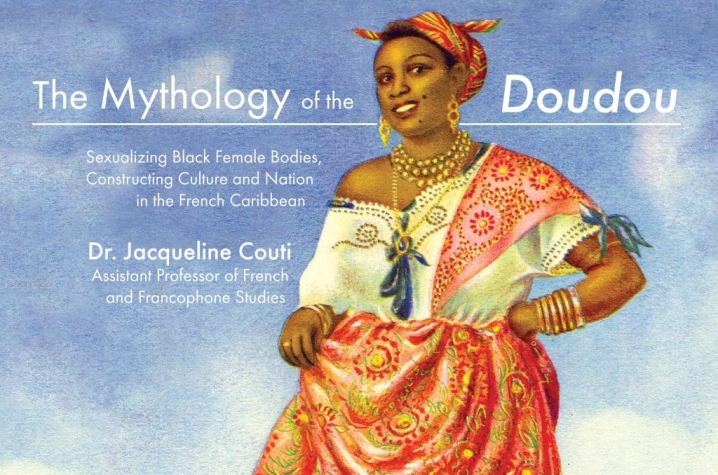 LEXINGTON, Ky. (Sept. 27, 2011) —  The lecture, "Sexualizing Black Female Bodies, Constructing Culture and Nation in the French Caribbean," is part of the African American and Africana Studies Program's Carter G. Woodson Lecture Series and will be held at 4 p.m. Thursday, Sept. 29, in Room 249 of the Student Center. Admission is free and open to UK students, staff, faculty and the public.

Jacqueline Couti, an assistant professor of French and Francophone Studies in the Department of Modern and Classical Languages, Literatures and Cultures at the University of Kentucky, will discuss how the development of "doudou," a Creole term in the French Caribbean, was adopted by 19th century European scholars to rewrite national identity in the  then French colony of Martinique. Martinique is now a department, which is an administrative district of France.

While the "doudou" image originated in Martinique and Guadeloupe, mainstream French culture eventually appropriated the term to describe an attractive woman of color from the French Caribbean.

European writers and scholars at the end of the 19th century, such as Lafcadio Hearn and Jenny Manet, also sexualized the image of the "doudou," employing eroticized images of the black female body to rewrite Martinican culture and national identity.

In redefining the term "doudou," authors like Hearn and Manet presented France and the rest of Europe with a skewed vision of Martinique as a divided society inherited from the plantation system. These simplistic and stereotyped representations posed problems for Martinican national identity and also with the colony's relationships to France.

"The foreigners’ fascination with the exotic women of color also alludes to the complexity of a racially divided Martinique and the challenging relationship between the colony and its metropole," Couti said.

Couti's discussion of the "doudou" concept in Francophone Caribbean is relevant to today's audiences as well.

"The media bombard us with images of femininity and sexuality," she explained. "What do they say about us and others? I hope people in the audience will begin questioning representations of the body in general and of the female body in particular. I want them to wonder what those images say about a particular culture."

Couti also hopes her audience will come away with an understanding that sexuality serves as a vehicle for strong identitarian movements of cultural identity and nationalistic awareness.

"The analysis of sexual discourse and the exploration of its historical aspects facilitate the understanding of the body as a social and cultural indicator, not only in the Caribbean but in the world around us," she said. "Ultimately, the academic community of UK will learn not only about the French Caribbean, but about topics relevant to their work or even their life. We all have a vision about what femininity means, but are we always aware of its political and cultural undertones?"

The renowned professor of Francophone Caribbean studies in the College of Arts & Sciences  specializes in Francophone Caribbean, African and New World literatures and cultures, examining how the notion of local knowledge in the colonial and post-colonial eras has shaped the literatures and awareness of self in former colonies through what she terms a "Sexual Edge" – a sharp violent representation of sexuality as a societal construction.

Woodson was a black historian, author, journalist and educator who received a bachelor's degree from Berea College. He was the second African American to earn a doctorate from Harvard University.