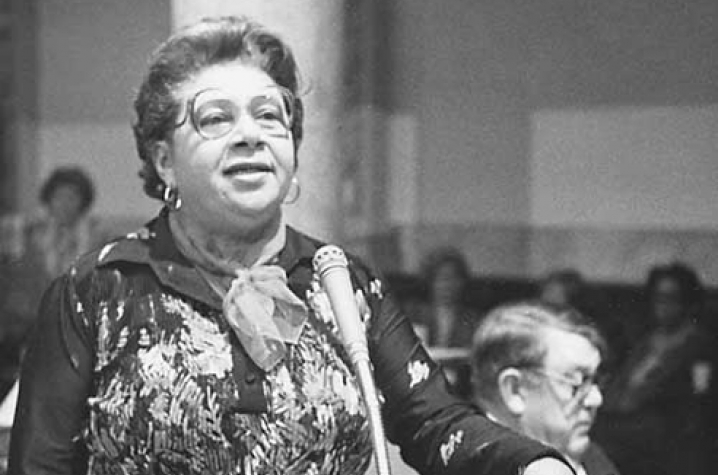 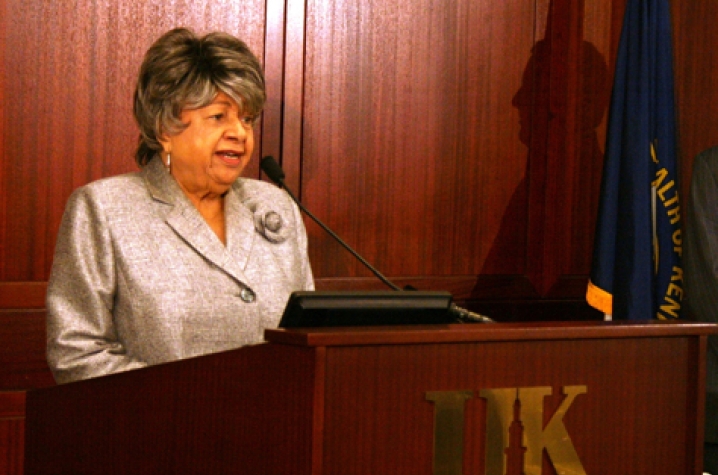 LEXINGTON, Ky. (May 12, 2011) — On the 57th anniversary of Brown vs. Board of Education, an extraordinary group of Louisville female leaders will come together with the University of Kentucky to honor a pioneer of racial and gender equality, former Kentucky Senator Georgia Davis Powers.

As a leader for freedom and fairness, Powers has continued as a champion for women in politics and public policy, paving the way for progress in the Commonwealth beyond her working years.

"Senator Powers achieved so much on behalf of women, and it is by women today that she is being honored in this substantial way," said Carol Jordan, director of The University of Kentucky's Center for Research on Violence Against Women. "It is part of the mission of the center to honor our history in this field and to honor the champions across the Commonwealth who made that history mean something to the everyday lives of women and children."

UK's Center for Research on Violence Against Women kicked off the public effort to establish a chair in Powers' name last December. This is the fourth chair created by the center and will focus on multicultural studies of violence against women and the unique experiences of women of color.

The Georgia Davis Powers Endowment will affirm the importance of addressing race, ethnicity, and other socio-cultural factors in the study of violence against women.

All women are at risk of abuse, but certain populations in the U.S. and around the world are often at greater risk. "Culture, race, and ethnicity – these things matter to whether or not you experience violence and what you do in response," said Jordan. "These issues are so important; we thought that they required their own nationally recognized chair."

Powers was more than willing to lend her name to such a worthy area of research. "Senator Powers connects with the work of our center; she experienced violence as a teen, and her fight for nonviolence has been life-long. Her life mission is also the mission of this center. With that in mind, she fits completely with what we’re trying to do."

Starting with her first bill for a statewide fair housing law, Powers carved out a 21-year career fighting for civil rights legislation that prohibited sex, job and age discrimination.

One of nine children, Powers was born Oct. 19, 1923, in Springfield, Ky. A civil rights leader in the Commonwealth, she was one of the organizers of the 1964 Civil Rights March on Frankfort in support of a law that would make public accommodations accessible to all, regardless of race. That same year, Powers became the first black woman to serve on the Jefferson County Democratic Executive Committee. As senator, she chaired two legislative committees, Health and Welfare (1970-76) and Labor and Industry (1978-88). Powers also served as chair of the Reverend Jesse Jackson's presidential campaign twice.

Inspired by the work of champions like Powers, UK created the Center for Research on Violence Against Women in 2003. It was created with the belief that science must be brought to bear to end the massive social and global injustices done to too many women and girls. That research must lead to a more full understanding of violence against women, not for the sake of scientific exploration alone, but with the goal of ending the systematic harms committed against women and children around the world.

UK will hold a national search for the appropriate endowed chair scholar, who will research and teach, but also exist as a fulcrum for a diverse range of research at UK. The Center for Research on Violence Against Women is establishing a $1 million endowment to support the Georgia Davis Powers Chair. Having already raised $750,000, the center is seeking to raise an additional $250,000 by the end of 2011 for the Georgia Davis Powers Endowment.

Individual luncheon tickets are $85, while a table sponsorship (table of eight) is $1,000.

If you are unable to attend the luncheon, but would like to support The Champions for Women Campaign, please see the following link https://giveto.uky.edu/CRVAW_p/crvaw.htm. You may also directly contact Jordan at carolj@uky.edu.