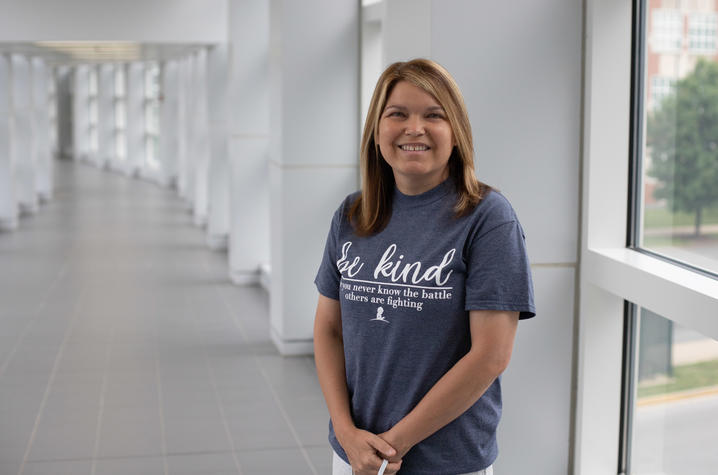 Diana Lindsey received a new liver in the midst of a global pandemic.

LEXINGTON, Ky. (July 28, 2020) ­— Major surgeries and extended hospital stays are harrowing enough under normal circumstances. Factor in the stress and uncertainty of a global pandemic and the resulting restrictions on hospital visitation policies, and you can get an idea what Diana Lindsey faced back in April when she received a liver transplant at UK HealthCare’s Transplant Center.

Six years ago, Diana was diagnosed with autoimmune hepatitis, a condition where the body’s immune system attacks the liver. Left untreated, it can lead to liver failure and ultimately death. A liver transplant was Diana’s only option.

“Typically autoimmune hepatitis is seen in females (about 70%), young to middle age,” said Hender Rojas, an advanced nurse practitioner in the UK Transplant Clinic and part of Diana’s care team. “Autoimmune hepatitis is generally well treated with steroids and/or immunosuppressives to keep the immune system from attacking the liver. However, in those who do not respond to medications and develop advanced liver disease or failure, liver transplantation becomes a lifesaving procedure.”

Patients waiting for a liver transplant are rated by their MELD score, which stands for Model for End-life Liver Disease. A patient’s MELD score is the prime indicator of how urgently the patient needs a liver. Based on blood work and lab tests, the score can range from six to 40. Diana’s MELD score was 38.

In October 2019, Diana was placed on the waiting list for a new liver. She would travel from her home in Edmondson County to Lexington, a two- and half-hour drive, for her appointments.

In March of 2020, she was hospitalized for an infection, and briefly removed from the transplant list. After being discharged, she was readmitted three days later and was placed back on the waiting list. Almost immediately, her care team had some news.

“That was Wednesday night and Thursday morning at 6 o'clock they came in and told me they had a liver for me.”

Just two weeks prior to Diana’s transplant, UK HealthCare halted elective procedures in an effort to preserve personal protective equipment create patient capacity in the hospital during the pandemic. But Diana’s surgeons knew the timing was critical and she could not wait. But due to visitor restrictions, Diana’s husband couldn’t be with her at the hospital.

But Diana says she never felt alone. Her team of nurses, many of whom remembered her from previous hospital stays, would sit with her in her room.

“Being in there by myself was scary, but really and truly, I didn't really feel that alone,” said Diana. “I never felt alone because I knew God was with me and there was lots of people praying for me. Everyone was wonderful.”

Diana made remarkable progress after her transplant. Her surgery took place on a Thursday evening, and by Friday she up and moving. She was discharged the following Tuesday, and since then, has had no pain or complications.

Now almost five months after her life-saving transplant, Diana is feeling great. The UK Transplant Center has an outreach clinic at the Bowling Green Medical Center, but Diana and her husband choose to come to Lexington because of the connection and relationships she has with her care team.

“The doctors at UK are wonderful,” Diana said. “My husband even said, if I had to see the doctor every day, we would drive every day, or we would move to Lexington.”