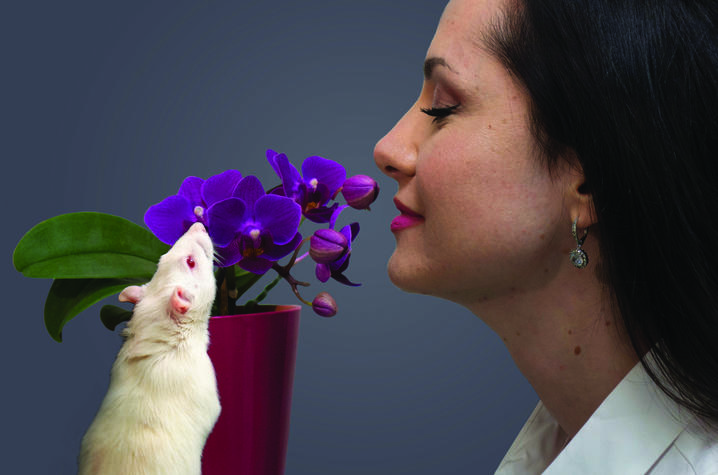 LEXINGTON, Ky. (Feb. 26, 2018) — Historically speaking, smell is the Rodney Dangerfield of the human senses. A series of scientific mischaracterizations rooted in (of all things) the religious politics of 19th century France and perpetuated by scientists like Sigmund Freud led to widespread acceptance that humans were underachievers in the smelling category.

But a growing number of scientists are rewriting the script, advancing the argument that smell has a powerful influence on emotions and behavior.

"We all have heard the hypothetical question, 'Would you rather lose your eyesight or your sense of smell?'" said John McGann, an associate professor at Rutgers University.  "Most people would rather be able to see than smell, of course, but smells evoke strong emotional and behavioral reactions and are often associated with distinct memories. The social role of smell is greater than we give it credit for, and olfactory impairment can have a disastrous effect on emotional well-being and diet. It's important that medical practice begin to take that into account."

The bulk of McGann's career has been dedicated to exploring how the brain uses smell to learn about the world.  One of his most interesting findings turns cause and effect in the smelling world on its ear.

"We've found that when animals learn that a certain smell is associated with an unpleasant experience, the olfactory system itself changes. The cells in the nose that detect the odor become hypersensitive to that odor and send stronger signals to the brain that look like a warning signal for the associated danger,” he said.  "We didn’t expect to see that learned information about odors would show up so early in the olfactory system, and it has inspired a series of follow-up experiments to see what else 'the nose knows.'”

Because mice have roughly 1,000 odor receptors and humans have about 350, people erroneously extrapolate that rodents' sense of smell is triple that of a human, but McGann says the math doesn’t work that way.

"Both mice and humans are capable of smelling almost anything volatile enough to get into the nose and more than a couple atoms in size," McGann said. "In fact, we have odor receptors that are so broadly tuned that we can detect smells that scientists haven't yet invented."

That provides hope for perfumists -- and for chefs and other food scientists looking for ways to help patients enjoy food and/or make healthy choices about what they eat.

McGann joins luminaries from the worlds of science, nutrition and culinary arts at the International Society of Neurogastronomy Symposium this weekend, where they will share their data and experience on the psychological influences on eating and behavior, the chemosensory properties of food and how we experience them, the role of food as medicine, and the history and evolution of flavor and flavor perception.

The day's format differs from the typical symposium, featuring brief presentations modeled after the popular TED talks and punctuated with breaks for tastings and a contest where the food from nationally acclaimed chefs Taria Camerino and Jehangir Mehta will be judged by patients with diabetes.

This year, there is an experiential event on Friday, March 2: a five-course dinner with wine pairings and bourbon flavor wheel instruction by Chris Morris, Master Distiller at the Woodford Reserve, plus interdisciplinary clinical neuroscience lectures.

For more information about the symposium and how to register, click here.