LEXINGTON, Ky. (June 12, 2014) -- It was a Toyota Corolla that brought Geoff Manley and Shelly Steiner together.

In the early 1980's, Manley was a high school dropout working as a mechanic -- first at the Texaco station in Lexington's Gardenside neighborhood, and then on his own.  His clientele included many University of Kentucky faculty.  Microbiology professor Shelly Steiner was among them.

"Geoff would fix my car and we would chat," Steiner, a professor of microbiology, recalls. "Some kids are polite -- you know, 'yes, yes sir' -- but disengaged. Geoff was clearly intelligent and focused. You can talk to someone for just a few minutes and know right away how bright they are.  Geoff was like that."

No one else in Manley's family had been to college, so "it just wasn't on my radar screen," he says.  Steiner's suggestion that Manley complete his GED and enroll at UK was, in his words, a "transformative moment."

As a student, Manley struggled to manage his classwork and multiple odd jobs, including two stints in Steiner's lab. But with Steiner's encouragement, Manley graduated in 1988, went to Cornell for his MD-PhD, and on to California, where he is currently vice chair for the Department of Neurosurgery at the University of California-San Francisco.  Manley's earlier work with Steiner and a colleague in the lab influenced his decision to pursue a career in the neurosciences; his particular interest is in traumatic brain injury, or TBI.

While professional athletes and their concussions have become the poster children for traumatic brain injury, TBI manifests far more commonly in auto accidents or slips-and-falls. At least 1.7 million people in the US seek medical attention for TBI each year and 2 percent of the U.S.. population now lives with TBI-caused disabilities at an annual cost of about $77 billion, according to the CDC.

"I did a lot of bench work earlier in my career, but I was torn between my interest in the basic sciences and my desire to do something directly relevant for TBI patients," Manley explains. "So I began to explore a new translational research approach to TBI."

His work has caught the attention of the National Institutes of Health (NIH), which has awarded him $18.8 million over five years to support worldwide research on concussion and traumatic brain injury. Dr. Manley is ground zero for one of the largest international research collaborations ever coordinated by funding agencies, which includes the NIH, the European Commission, the Canadian Institutes of Health Research (CIHR), and the U.S. Department of Defense (DOD).

Because of its complexity, TBI has defied conventional approaches to diagnosis and therapy development.  According to Dr. Manley, the search to find broadly applicable, effective treatments for TBI has been disappointing so far.

"After three decades of failed clinical trials, a new approach is needed,” he said.  By analyzing data from enormous cohorts of TBI patients worldwide, Dr. Manley and his colleagues hope to drastically refine current TBI measures. "Here we are in the 21st Century, and we classify TBI in one of three ways: mild, moderate, or severe," he says.  "Cancer, by comparison, can be characterized in a very precise way, and treatments are customized to each patient's needs."  Dr. Manley's goal is to create a set of TBI classifications that are as detailed as those for cancer -- the term he uses is "precision medicine."

“We expect that our approach will permit researchers to characterize and stratify patients more effectively, will allow meaningful comparisons of treatments and outcomes, and will improve the next generation of clinical trials. Advancing our understanding of TBI will ultimately lead to successful, patient-specific treatments.”

Dr. Manley returned to Lexington last month as a keynote speaker for this year's KSCHIRT Symposium, hosted by the Spinal Cord and Brain Injury Research Center (SCoBIRC) at the University of Kentucky.  He shared the podium with experts representing a who's who of TBI research -- including SCoBIRC's own Kathryn Saatmann, Ph.D., who presented her findings on the therapeutic potential of insulin-like growth factor-1 in TBI. Approximately 150 scientists attended the symposium, in its 20th year, to share research data on topics like brain plasticity and the role inflammation plays in brain damage post-TBI.

SCoBIRC was established in 1999 to promote research on injuries to the spinal cord and brain that result in paralysis or other loss of neurologic function.  The center's revenues originally came from the Kentucky Spinal Cord and Head Injury Research Trust Fund (KSCHIRT), which funneled revenues from fines for seat belt and other moving violations to TBI/SCI research projects in Kentucky, although these days that amount is dwarfed by funding from other sources, such as the NIH.

According to Jim Geddes, PhD, SCoBIRC is one of the few centers in the U.S. with expertise in both spinal cord and brain injury.  Consequently, SCoBIRC has been able to attract some of the best minds in the field to Lexington, from places like the University of Pennsylvania, Ohio State University, Case Western Reserve, and the pharmaceutical industry.

"For every dollar we receive from the state through KSCHIRT, we are generating another $4.80 in extramural support," says Geddes, SCoBIRC's director. "It's been a case study in momentum: we've used KSCHIRT money to do some interesting research, which attracts more researchers, who in turn get more money.  SCoBIRC is now reaching a critical mass where we are doing some pretty great things in both the basic sciences and in translational science as it relates to brain and spinal cord injury." In fact, Geddes notes, the center is gearing up for not one, but two Phase II clinical trials, and they are an active participant in what Geddes calls an international treasure hunt for the biomarkers of brain and spinal cord injury.

Steiner says one of UK's strengths is its emphasis on independent research projects for students. Any UK student who wants to get a feel of what it's like to conduct big-time research in a nationally funded lab has that opportunity. SCoBIRC is an excellent example of that commitment, with dozens of undergraduates (and three high school students) working in its labs alongside SCoBIRC faculty, helping to discover and advance potential therapies for the neuroprotective or neurorestorative treatment of TBI and SCI. This relationship between faculty and student develops bonds that can inform a student's life path in profound ways, as it did with Geoff Manley and Shelly Steiner.

Manley echoes this sentiment. "Having Shelly Steiner come into my life was a transformative moment. His persistence and encouragement got me my GED, got me through UK, and got me to where I am today."

Steiner shakes his head and in a gentle, self-deprecating voice, disagrees.  "Geoff would have made it anyway -- he had the intellectual octane and the motivation.  He may think others helped him, but it really was his trip." 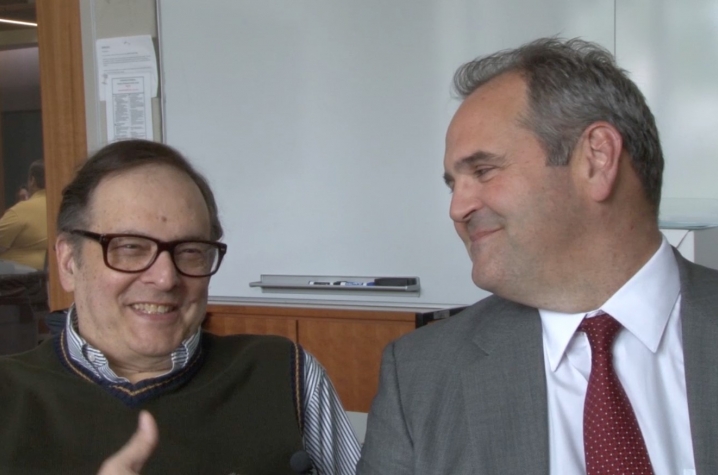