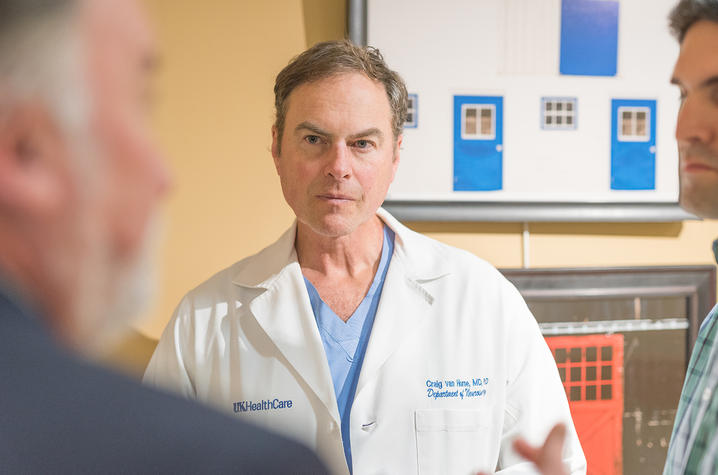 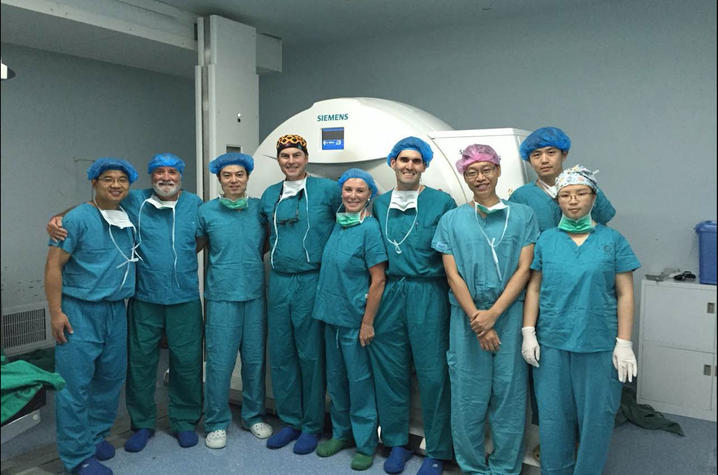 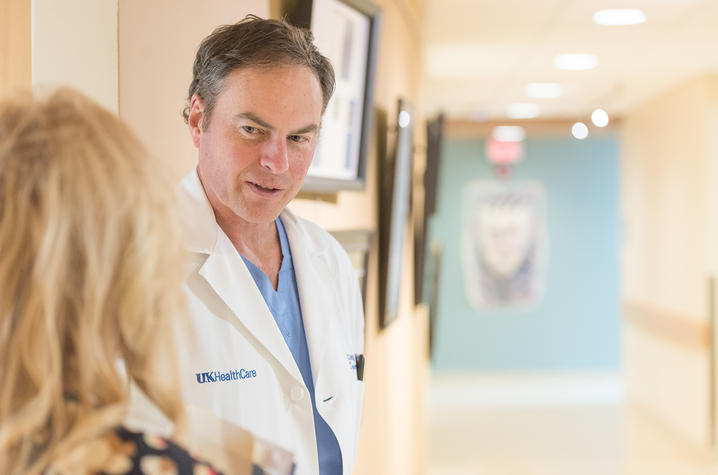 LEXINGTON, Ky. (Jan. 6, 2017) — About 14 years ago, Bill Crawford noticed a persistent twitching in one of his fingers that was interfering with his rehearsal time as the music pastor at Porter Memorial Church.

"It was driving me crazy," said the 57-year-old Lexingtonian.

He'd noticed a few other things too, like weakness.  He had mentioned it to his primary care physician, who ordered heart and lung function tests, but both were negative.

Finally, however, he was so weak that he could no longer ride his bike.  "I just couldn't seem to go," he said.  So he made an appointment with a neurologist.

After a few minutes with Crawford, the neurologist asked him to return on Monday – and bring his wife Lisa with him.

On that dreadful day, the neurologist told Bill that he had Parkinson's disease. At the time, Bill was just 44 years old.

"Obviously not what you want to hear," Crawford said.  "But then I began to think of Michael J. Fox and all he had accomplished, and I thought I could do that too."

Eventually, though, the medicines that helped Bill control his Parkinson's symptoms began to lose their effectiveness.

"There is no cure for Parkinson's, and treatments we currently have at our disposal can only reduce symptoms," explained Dr. John T. Slevin, a specialist at UK HealthCare's Kentucky Neuroscience Institute, who began treating Crawford in 2006. "The disease progression inevitably overcomes the drugs' capacity to alleviate the rigidity and tremor that are hallmarks of Parkinson's."

That meant that Crawford would go into what he called "full body charley horses" – sudden, painful involuntary spasms that left him paralyzed and lying on the floor for as much as 45 minutes.

"It was the pits," Crawford said.  Sometimes at the last minute he would be unable to conduct musical performances at church services, which was particularly disheartening.  "I didn't want to be a spectacle."

It was then that Slevin suggested a treatment called Deep Brain Stimulation and connected Crawford with UK HealthCare neurosurgeon Dr. Craig van Horne.

Deep Brain Stimulation (DBS) is a surgical procedure used to treat the problems associated with Parkinson’s disease. The procedure involves implanting electrodes into the brain that are connected to a small, pacemaker-like device implanted in the chest.  These electrodes produce electrical signals that override the abnormal electrical impulses caused by the disease, which attacks and breaks down nerve cells in the brain.

The procedure isn't suitable for everyone and requires thorough psychological testing and motion studies to ensure that a patient is ready for DBS.  "I wasn't sure I would qualify," Crawford said. "But I knew this was my last chance."

Crawford considers it a blessing that he was, in fact, qualified to receive DBS.  But then came an additional surprise: after further testing, van Horne told Crawford that he was qualified to participate in a study for a new version of DBS called "DBS Plus."

Van Horne explains that the central nervous system – which is comprised of the brain and spinal cord – is unable to heal itself after injury or disease. However, peripheral nerves from the rest of the body are able to regenerate. With the support of a pilot grant from the UK Center for Clinical and Translational Science, van Horne launched the first phase of research for the investigational DBS Plus procedure, which aims to leverage the regenerative capacity of the peripheral nervous system to help heal the brain.

"Our study is designed to test whether taking a small part of peripheral nerve tissue and putting it in the brain would prompt healing in the areas of the central nervous system damaged by Parkinson's," he said.

With DBS Plus, van Horne and his team (Greg Gerhardt, PhD, and George Quintero, PhD,) take a small piece of nerve tissue from the patient's ankle and implant it in their brain.  Because the tissue is from a patient's own body there are no concerns about rejection, and because the experimental treatment is applied during a procedure that was declared safe and effective by U.S. Food and Drug Administration (FDA) almost two decades ago, DBS Plus is considered relatively safe with only minimal additional risk.

Nonetheless, van Horne is cautious about the process of enrolling patients in the study.

"It's more ethical, in my opinion, to wait until after a patient qualifies for the basic DBS before I tell them about my study," he said.  "I don't want patients to elect to do DBS just because they want DBS Plus."

And van Horne says he was thrilled that Crawford qualified for the study.

"When I met Bill for the first time, he was lying paralyzed on the floor in the treatment room," van Horne recalled. "It was a startling and heart-breaking sight."

Crawford received DBS Plus in August 2015. His family can't get over the dramatic changes in his mobility.

"I'm climbing ladders now, I can plan our church's worship time, I can lead the services, I can still lead others in worship," he said.

The charley horses have gone away, and Crawford now takes just one or two pills a day, down from 12 before the surgery. A before and after video of Crawford walking the halls outside van Horne's office is astonishing.

To date, 34 patients have participated in the DBS Plus study with encouraging results.  Of the 17 patients that are 12 months out from their procedure, 65 percent of them have shown a clinically important improvement in motor performance as a result of the graft.

Van Horne is quick to point out that the study needs to be tested on a larger sample size at many other medical centers around the country before it can be deemed a viable treatment. Furthermore, he cautions, while 12-month results are promising, it's important to evaluate effectiveness over a longer term. But assuming all goes as well as it has so far, DBS Plus shows promise as a means of slowing down the disease process.

Van Horne and his team garner no financial benefit from DBS Plus, which adds just a fraction of cost to the DBS surgery that is already covered by most insurance plans. "Our payback is the gratification we receive in seeing our patients do well," van Horne said.

Crawford understands that DBS Plus isn't a cure for his Parkinson's, but is delighted to have a little more time to enjoy life.

"'Feeling the beat' is critical to my work as a musician, and my Parkinson's had begun to take that away from me," he said. "I couldn't even snap my fingers with the music anymore."

But, said Crawford, as he woke up from the surgery, he instinctively began to tap his fingers like a metronome. Two members of the team, Julie Gurwell, the PA responsible for programming the DBS equipment, and Ann Hanley, a Parkinson's patient who personally accompanies patients through their surgeries, were sitting with him, and they asked him what he was doing.

"I was too emotional to explain but I managed to say 'I can feel the beat.' And they high-fived each other."

"I just knew God had answered my prayers."

You can make a difference through participating in research and discovery. For more information about getting involved, including a list of current studies at UK and access to studies nationwide, you can visit UKclinicalresearch.com, call 859.257.7856, or join www.ResearchMatch.org/uky. To learn more about eligibility for the DBS+ study, please contact Marlene McClure at jmarlenem@uky.edu.