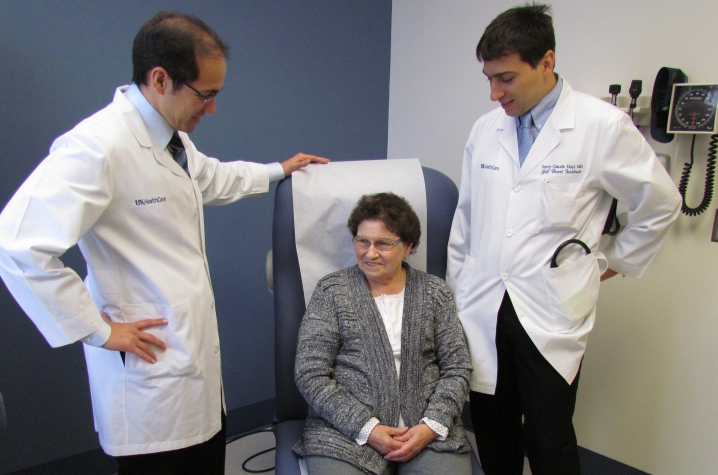 LEXINGTON, Ky. (April 9, 2012) - At 42, Ollie Whitaker of Whitesburg, suffered a massive heart attack. It was at that point in her life, things changed forever.

"I never could do much of anything since the heart attack," said Whitaker, now 72 and a life-long homemaker who is the mother of four grown children. "I went to doctors, and they tried everything until there was no more to offer."

That was before she met Dr. Samy Claude Elayi, a cardiologist with UK's Gill heart Institute.

When Whitaker came to UK, Elayi and his team found themselves looking for answers. Whitaker was suffering from several heart issues. An internal defibrillator - which is used to "shock" Whitaker's heart back into rhythm during one of three different arrhythmias she suffered from - was shocking her repeatedly. Each time her heart was shocked, Whitaker had to make a three-hour trip from her home in Whitesburg to Lexington via ambulance or helicopter.

"I wouldn't wish it on anybody," said Whitaker about living through numerous shocks. "It was hard to get used to. I was in the hospital every time I turned around."

During each trip, Whitaker's condition would worsen.

"The defibrillator going off is a very bad experience for those have gone through and it is typically described as a 'horse kicking the chest'," said Elayi. "It can really deteriorate the quality of life when it is frequent, as one never knows when it is going to happen."

Elayi knew that ablation surgery was the only way to stop the shocks.

The procedure consists of inserting a catheter inserted into a patient's blood vessels to remove a faulty electrical pathway and tissue from the patient's heart. Typically, the catheter is placed into the patient's femoral artery, internal jugular or subclavian vein. The catheter is guided toward the heart, and high-frequency electrical impulses are used to induce the arrhythmia and then destroy (or ablate) the abnormal tissue causing it. Those can be in limited area or larger areas, depending of the nature of the arrhythmia.

Typically, the procedure is performed with one target, rarely two. But Whitaker's case performed in December 2010 was even more complex.

Elayi and his team - which included Dr. Gustavo Morales - performed an unusual procedure in Whitaker's case. Whitaker becoming the first known patient to have a triple ablation during the same procedure targeting three areas of the heart in three different chambers of the heart to help it maintain a regular rhythm.

"Performing two ablations during one procedure is commonly done, but three with this complexity is basically unheard of," said Elayi. "But in this patient's case, despite the risk, I believed that we could perform three ablations - one for her ventricular tachycardia, one for atrial fibrillation and a third for her atrial flutter, to be effective and do everything when we are in the heart."

Elayi and his team perform hundreds of ablations on heart patients each year. Some of those procedures can last one or two hours; others, like Whitaker's procedure can last more than 10 hours, depending on the complexity of the case.

Today, more than a year after the procedure, Whitaker is thankful for Elayi and his team and for their willingness to perform such a complex procedure at once.

"I'm so very pleased," Whitaker said. "And I feel so much better." She now says she is able to do some of the things that she hasn't been able to do for a while - things that many people take for granted.

"I can work in my flower bed outside and do more around the house," Whitaker said. "It's easier than it was before. And the best part is, I haven't been shocked in over a year. I'm doing very well."