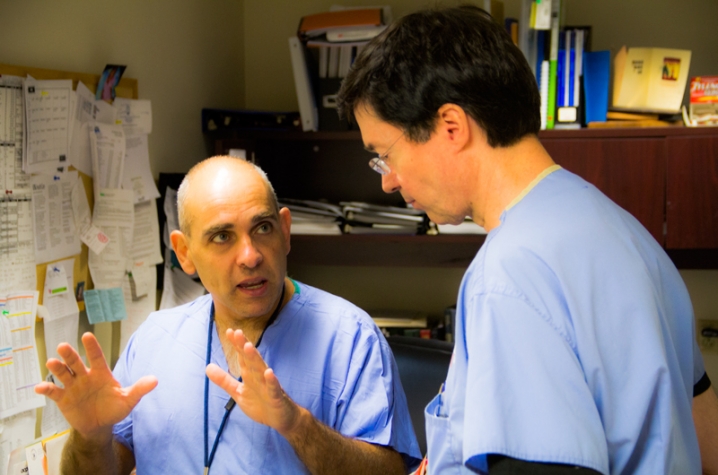 LEXINGTON, Ky. (Sept. 6, 2013) - In his 11 years as a vascular surgeon, Dr. Eleftherios Xenos, director of the UK HealthCare Vein Clinic, said he has seen tremendous progression in endovascular procedures. The changes have been exciting for both Xenos and his staff.

"You do things now that wouldn't have been considered 15 years ago," Xenos said. "You don't really get surprised because it happens gradually, but if you look at the big picture, it's very cool."

Xenos said the surgeries are now less invasive and patients are able to go back to full activities faster.

In some cases, the newer procedures have meant a difference between life and death.

"We see older and older patients, and sicker people, just because we can perform these procedures on them now," Xenos said. "Before, these people weren't candidates."

The majority of Xenos' patients are age 60 and older, with the exception of traumatic aneurysm patients, who are usually younger.

One of Xenos' youngest patients has been a 19-year-old involved in a crash who was unable to undergo an open-chest procedure because of a pre-existing brain bleed. Xenos said that with younger patients, grafts are checked yearly with a CAT scan to ensure the graft is functioning properly, as the grafts haven't been tested for longer than 15 years.

Fenestrated grafts: Fenestrated grafts were only recently approved by the FDA as a way to fix aortic aneurisms. UK HealthCare is the only facility in Lexington - and one of few in the state - to use this technology.

The fenestrated graft was designed to treat a complex form of abdominal aortic aneurysms in which the weakened, enlarged vessel wall is too close to the arteries leading to the kidneys and other nearby organs. Previously available aortic stent grafts could not be safely used to treat these aneurysms, which previously meant major surgery or in some cases, death, for the patient.

A fenestrated graft - a tubular, fabric graft that uses metal stents as supports - features custom-positioned holes that ensure proper blood flow through the aortas and to the kidneys and other nearby organs.

In about 10 percent of aneurysm patients, the area affected lies close to arties that branch into the kidneys, small bowel and liver. The fenestrated graft allows blood flow to continue downward without going into the aneurysm.

The procedure takes about four hours to complete, and involves a team of physicians that includes a cardiothoracic surgeon and a vascular surgeon.

Traumatic aneurysms: As the only Level 1 Trauma Center in Lexington and the surrounding areas, UK is the only hospital able to traumatic aortic aneurysms. These aneurysms occur primarily in patients whose aortas are torn during events such as vehicle accidents, shootings, or stabbings.

Previously, traumatic aneurysms resulted in sudden death - the diagnosis could only be made during an autopsy. But the development of angiocardiography and other procedures, it is now possible to not only diagnose these injuries in a patient, but to repair them as well.

As with other vascular surgeries, repairing a traumatic aneurysm (when possible) previously required an open-chest surgery in every instance. Now, through transcatheter surgery, the patient usually has a shorter hospital stay, a shorter recovery period and fewer risk factors.

HeRO Grafts are used primarily in patients on kidney dialysis who. Over time, repeated dialysis can block a patient's superior venicava. The HeRO Graft creates a new channel for arterial blood flow for the patient, even when he or she is not receiving dialysis.

The HeRO Graft has two pieces implanted under the skin. During the surgery, an outflow component is inserted into a large vein in the neck. The tube is directed past any blockages caused by other accesses.