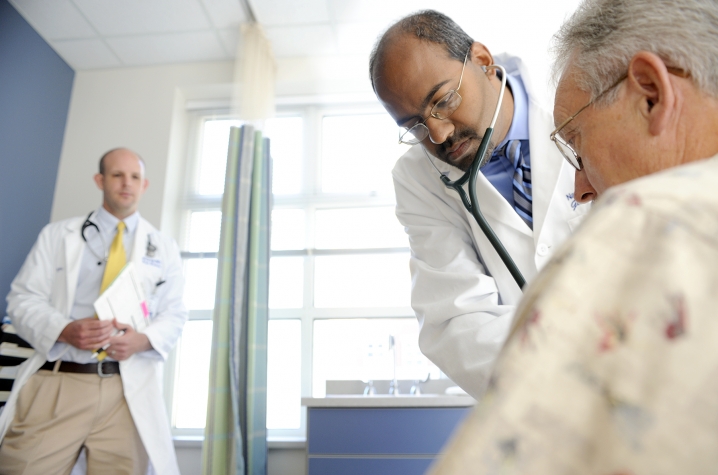 After weeks of dealing with the symptoms, Doty was diagnosed with walking pneumonia and received antibiotics. He started to feel better, but the illness crept back. Finally, after a trip to Red River Gorge — where he felt he just couldn't catch his breath — he went back to his physician and was referred to a cardiologist.

After running tests, his doctors gave him a new diagnosis — a severely weakened heart with an ejection fraction of less than 10 percent. The ejection fraction is a measure of how effectively the heart can pump blood volume into the body — and in a healthy heart, that number falls between 50-65 percent.

At a local hospital, Doty underwent a procedure to have a defibrillator implanted.  However, during the procedure, he became very unstable and his blood pressure began to drop.

Doty's heart was so weak, he needed a left ventricular assist devices or LVAD. He was swiftly transferred to UK Chandler Hospital — the only hospital in Lexington and only one of two in the state that perform VAD procedures for emergency treatment.

“When Mr. Doty was transferred to UK, he was very sick, on a ventilator and requiring two medications to support his blood pressure,” says Dr. Navin Rajagopalan, a heart failure cardiologist at the UK Gill Heart Institute.  “He was going into kidney and liver failure. It was clear that he needed an assist device as soon as possible before the damage to his body was irreversible.”

VADs are sometimes used briefly following heart attacks or surgeries because they can allow the heart to rest and even heal. Some patients require them long-term — as a bridge to transplant, for instance — and some patients with advanced congestive heart failure require a VAD for the rest of their lives.

Andy Baker, a UK patient whose heart was damaged by a viral infection, says he was initially reluctant to get a VAD. Now, however, the Danville resident says he's happy to keep the device and has no interest in getting a heart transplant. With the VAD, he's able to stay active and busy, noting that he "doesn't see any sense in just sitting around."

"I had mixed feelings about it," Baker said of getting the VAD. "But it's given me life again."

UK began performing VAD procedures in 1995, and each year, UK performs about 20 to 30 procedures on patients all across the Commonwealth and beyond. UK's Advanced Ventricular Assist Device program recently received their third straight biannual Certificate of Distinction from The Joint Commission (TJC), the leading accreditor of health care organizations in America. To earn this distinction, eligible VAD programs must demonstrate excellence in TJC's standards, clinical practice guidelines and performance measures.

"Receiving the VAD Certificate of Distinction for the third straight review cycle shows just what an outstanding job our physicians, nurses and support staff are doing when it comes to treating patients who require these assist devices," said Dr. Maya Guglin, director of UK's Mechanical Assisted Circulation Program. "It's proof that we are going above and beyond to ensure our patients are receiving the best quality care."

For most patients, a VAD provides an opportunity to recover at home without the repeated readmissions to the hospital that may come from other heart failure treatment options — thus saving costs for both the hospital and the patient. With a VAD, many patients are able to return to their everyday lives and still do many of the same activities they did before.

And in some cases, the VAD allows the heart to heal enough so that the device is no longer needed. Doty is one of the lucky 5 to 10 percent of patients who recovered enough to warrant removal of the device. After 16 weeks of being on his VAD combined with regular cardiopulmonary rehabilitation, his ejection fraction had improved to 55 percent, and his device was explanted in December 2013.

"I almost feel like I never had it," Doty says, noting that having the VAD was a small price to pay for being healthy. "It wasn't that great of an imposition, considering that it was keeping you alive."

Baker, a father of three, echoes a similar sentiment.

"I had three girls at home, and I wanted to see them grow up," he said. "The LVAD has allowed me to do that."