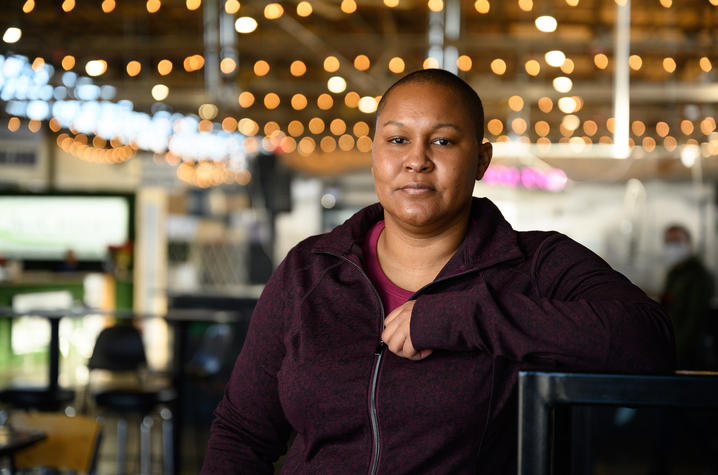 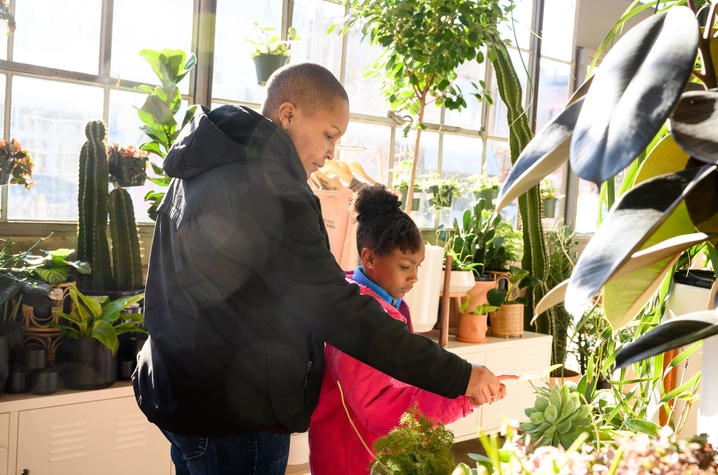 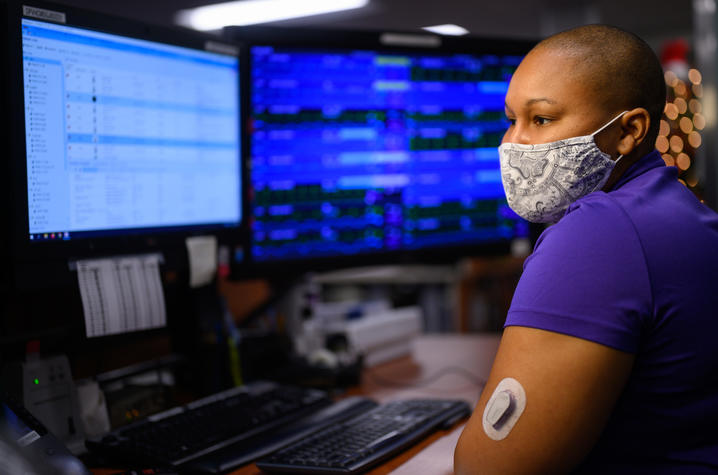 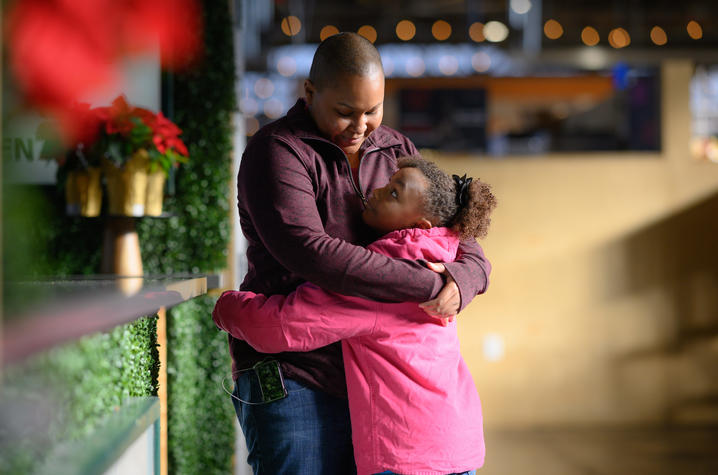 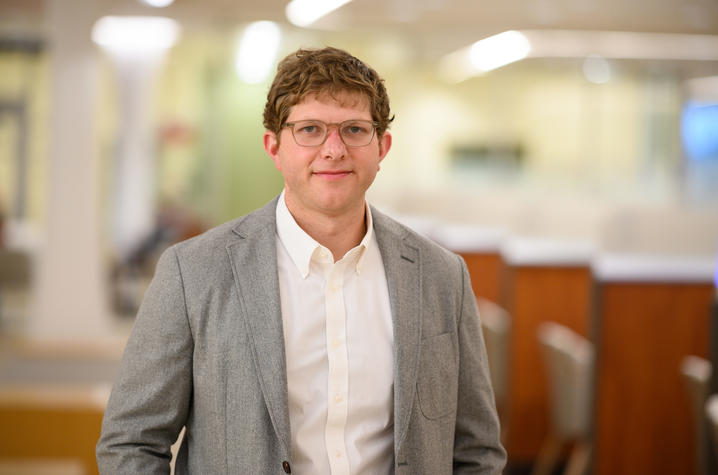 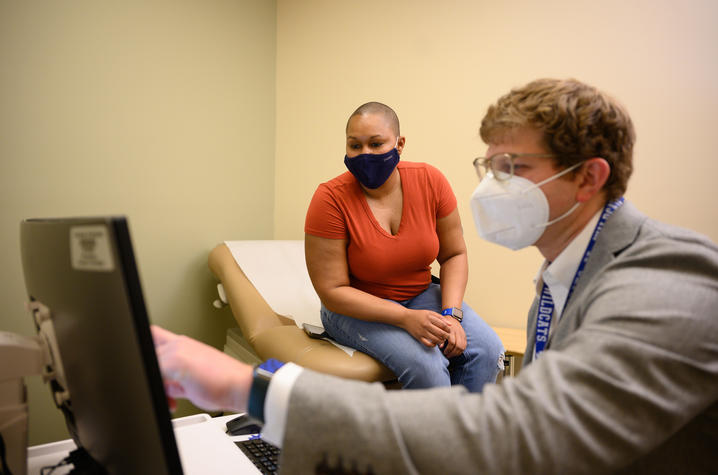 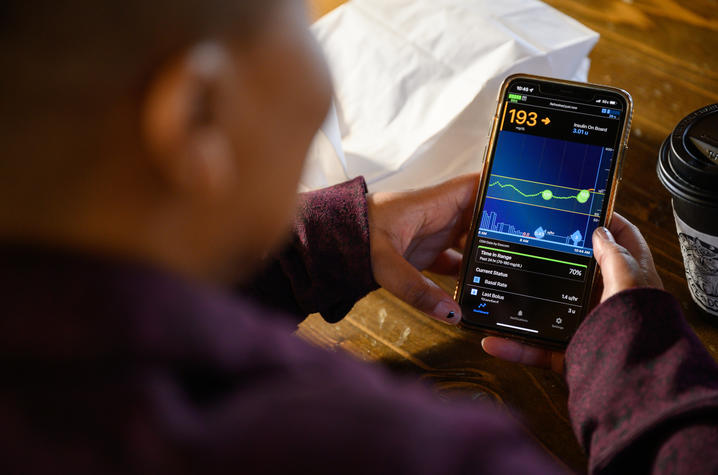 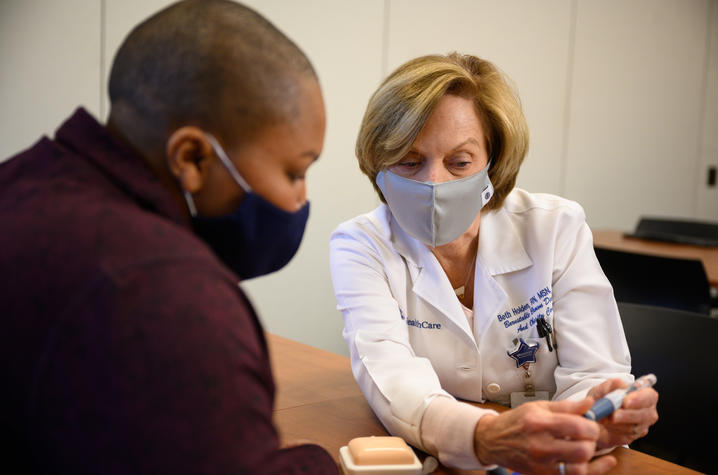 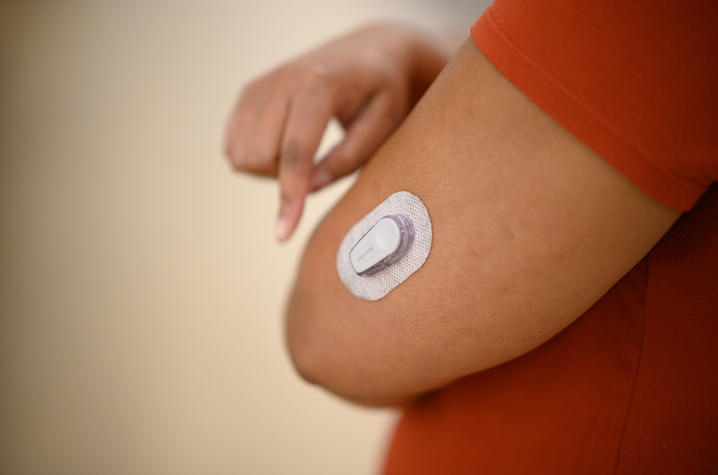 LEXINGTON, Ky. (May 31, 2022) — Whitley Smith’s weekends are usually packed with errands and other activities with her daughter, father and older brother. That’s why she didn’t think too much about a bad headache she experienced one Saturday in July 2020.

“Usually if I take ibuprofen, that will knock my headaches out, and it was just kind of a dull aching feeling,” said Smith. “Then on Sunday I was a bit dizzy, so I thought maybe I was getting an inner ear infection. I didn’t think too much about it again.”

Still thinking she might be experiencing something with her ear or even vertigo, Smith went on in to work at the University of Kentucky Albert. B Chandler Hospital and pushed through her shift as a cardiopulmonary tech.

But another day later, nausea crept in. She decided to go see her primary care physician.

“At this point, I thought I maybe had a bad case of vertigo,” said Smith. “I was like, ‘This really stinks; I see why people feel so bad when they have it.’”

After some testing, including a balance test, Smith was prescribed medication to help with her nausea and dizziness. At that point, it was Thursday — five days from when her headache really began. With a day off from work, the 32-year-old took time to rest.

Friday morning arrived. Smith still felt unwell, but headed on into work. Looking back, she says she probably shouldn’t have made the drive from her home in Harrison County to Lexington that day. But she’s also thankful that she did come to work, because it put her right where she needed to be.

Smith is not a stranger to health battles. She was diagnosed with Type 1 diabetes at age 3.

“I would get very frustrated with taking multiple shots and honestly, I thought that I really wouldn’t live that long with Type 1 diabetes,” she said. “Which is not a positive outlook to have. It was terrifying.”

In 2015, Smith decided to get an insulin pump. She only used it for about 10 months after experiencing some problems with it.

“I would have a lot of critical lows to where I was unresponsive and comatose. My dad and my brother would have to administer Glucagon emergency kits to me,” said Smith. At that time, she did not have a continuous glucose monitor to go along with her pump. “I got very frustrated with that because yes, it brought my A1C down, but I was bottoming out a lot when I was asleep.”

Smith decided to go back to manual injections and struggled to keep her diabetes controlled.

“There is no denying I was not doing everything I needed to be doing health-wise,” she said.

On July 17, 2020 — after days of dizziness, headache and nausea — Smith was unsure what she was experiencing but knew something was not right. Working as a cardiopulmonary tech, her job required her to interpret EKGs. She remembers having about 20 patients that day and getting through her morning strips by about 9 o’clock.

“I finally was like, ‘I feel pretty bad,’” said Smith. “I went to the bathroom and took my mask down because my face felt a bit funny. I looked in the mirror and I had some right facial droop.”

Smith then walked herself to the emergency department. Once she got to the check-in desk, a stroke alert was immediately called. While back in triage, Smith remembers the doctors being a bit perplexed.

“They were like, ‘Overall you look fine, and you made it here,” she said. After they looked closer at her eyes, they knew something was off and took her back for a CT scan. “They were amazed I drove in that day.”

After a CT scan, MRI and spinal tap, doctors determined Smith was experiencing a lacunar ischemic stroke and diagnosed her with horizontal and vertical nystagmus in both of her eyes. Nystagmus is a condition where the eyes move rapidly and uncontrollably. They can move side to side (horizontal nystagmus) and up and down (vertical nystagmus).

“I was more concerned about my eyesight than anything,” Smith said. “I really thought I had lost my eyesight at that point. That was terrifying.”

A stroke occurs when a blockage interrupts or prevents blood flow to the brain. Strokes that occur due to blockages in blood vessels within the brain are called “ischemic strokes.”

A lacunar stroke, like Smith experienced, is a type of ischemic stroke that occurs when blood flow to one of the small arteries deep within the brain becomes blocked.

At her age, Smith never imagined that her dayslong headache was a sign of a stroke. Although it’s less common for younger people to experience a stroke, those numbers are increasing, says UK HealthCare Kentucky Neuroscience Institute physician Kara Swafford, M.D.

“Stroke in the younger population is rare, but it is on the rise due to earlier development of risk factors that are typically seen at a later age, including high blood pressure and diabetes,” Swafford said.

Having diabetes increases a person’s risk for having a stroke. Having too much sugar in the blood can make the blood vessels become stiff and can also cause a build-up of fatty deposits.

That is exactly what happened to the 32-year-old, after years of struggling to keep her blood glucose under control — one of the small vessels deep within her brain became blocked.

“Elevated blood glucose over time can lead to inflammation in small vessels,” said Kyle Rosenstein, M.D., an endocrinology fellow at UK HealthCare’s Barnstable Brown Diabetes Center. “The longer you live with hyperglycemia, the more accustomed your body gets to it, and you can silently develop cardiovascular disease, leading to stroke and heart attack.”

The stroke kept Smith in the hospital for two days, and she had a strong motivation to get released as soon as possible.

“I was very adamant about wanting to go home because my daughter was turning 8 on Monday,” Smith said. “I made it back home Sunday evening.”

That motivation continues today as she focuses on keeping her diabetes managed.

“Sometimes it is the bad things that make us have a bigger outlook on improving our health,” Smith said. “Having a stroke definitely did that for me, because I definitely want to live to see my daughter graduate high school. That was a huge impact on my outlook of going back to the insulin pump.”

The single mother began working closely with the team at Barnstable Brown and eventually transitioned to a newer insulin pump technology that had an integrated continuous glucose monitor to help her track her blood glucose in real time and better manage her diabetes.

“I was dreading being back on an insulin pump,” said Smith. “But the continuous glucose monitor has helped tremendously. To be able to see my glucose every five minutes and to be able to act on it, that helps a lot. I have become a very big advocate for anybody to get an insulin pump and a continuous glucose monitor, because they work hand-in-hand.”

Both Smith and Rosenstein attribute much of her success to the treatment and education she’s received at Barnstable Brown.

“Our diabetes educators are amazing,” Rosenstein said. “Our educators are on the phone or doing one-on-one teaching from the time our clinic opens until it closes. The most important things they teach are the basic techniques of diabetes management such as reacting to low and high blood sugars, proper nutrition, dosing insulin for food intake and day-to-day adjustments for a wide spectrum of patients … we want to give people the tools to do it on their own.”

Rosenstein says the degree of improvement he has seen in Smith has been tremendous and is a bit rare.

“Different patients have different levels of motivation as far as their priority of where their diabetes sits in their life,” said Rosenstein. “I don’t think the big picture really starts adding up until you get later in life. I think she got to the point where she realized that her diabetes was impacting her day-to-day life, as well as her future life and so I think she was very much willing to do whatever it took to make changes.”

Today, Smith is the most optimistic she’s been about her diabetes since she was first diagnosed, close to three decades ago. It took a catastrophic health event to help her get on track, but now that she’s here, she’s looking forward with more hope than ever.

“It’s never too late to get your health under control,” said Smith.

Along with the help from the clinic team at Barnstable Brown, Rosenstein and Smith both acknowledge the multidisciplinary care she was able to receive while in the hospital has also been crucial to her recovery.

“Being able to see a neurologist for her stroke care is important, and then also for them to be able to pick up the phone and have an endocrinologist see her quickly and then follow her in clinic after her release is critical to reduce her risk of future cardiovascular events,” said Rosenstein.

Regaining her eyesight was the biggest hurdle following the stroke. Smith went through weeks of vestibular therapy for balance. She now follows up with retina specialist, cardiologist and a few other specialists just to keep a watchful eye on everything.

With her health improving daily and her diabetes under control, Smith is living an active life and now working in the lab at UK with plans to attend nursing school.

“It is the patient who has to take on the burden of diabetes. I think in her case, she was extremely motivated, and that has not faded,” said Rosenstein. “She has seen excellent results with her changes and I’m so very happy for her. I am confident that she is going to continue to have excellent control. It is a testament to her effort and the work of our educators.”