LEXINGTON, Ky. (July 26, 2017) — Perched on an examination table at UK HealthCare's Kentucky Clinic, Mackenzee Walters revealed a collection of bruises and scrapes on her knees — the traces of trampoline topples and skateboarding scuffs.

The 11-year-old shrugged off the purple blemishes spotting her knees and shins while reviewing her summer routine with Kentucky Children’s Hospital (KCH) pediatric gastroenterologist Dr. George Fuchs. These were minor battle wounds — nothing comparable to the pain she knew just months ago. With a side ponytail dangling alongside her face, she flashed impish grins while describing her new found outdoor adventures, bonding with her best friend and science experiments making “goo” in her bedroom.

For the first time her life, Mackenzee was liberated from an oppressive form of pain that prevented her from flipping on trampolines, playing outdoors and forming friendships with other kids. She was born with hereditary pancreatitis, an inherited disease characterized by inflammation of the pancreas, the organ that makes enzymes to break down and digest food and produces insulin necessary for blood sugar regulation. Because of intractable pain caused by the condition, Mackenzee’s life has been characterized by missing extended periods of school due to pain and frequent and prolonged hospitalizations to manage flare-ups of her pancreas.

Since the age of 3, she has taken potent opioid medications in an attempt to control pain and followed a strict diet barring her from the foods children love, such as macaroni and cheese and mashed potatoes. Even a bowl of Ramen noodles proved too disruptive for Mackenzee’s gastrointestinal system.

“I felt like someone was jabbing me in the stomach,” Mackenzee said.

But this year, after a surgical intervention coordinated through a multidisciplinary team at Kentucky Children’s Hospital and Cincinnati Children’s Hospital Medical Center, Mackenzee has adjusted to a new existence — one free of sharp, unrelenting pain, and miraculously, without a pancreas.

In January, surgeons at Cincinnati Children’s performed an innovative procedure reconstructing Mackenzee’s gastrointestinal tract to function without the source of her pain:  the pancreas. Fuchs, Mackenzee’s primary gastroenterologist at KCH, in collaboration with the pediatric medical and surgical teams at Cincinnati Children’s, determined that Mackenzee was a candidate for a Total Pancreatectomy with Islet Autotransplantation (TPIAT) surgery. Cincinnati Children’s Dr. Jaimie Nathan removed Mackenzee’s pancreas and expedited the organ to the islet facility where the islets, or the cells within the pancreas that produce insulin needed for glucose metabolism, were isolated. The islets were returned within hours, with Mackenzee still on the operating table, and Nathan transplanted the islets back into her liver where the cells took up residence and resumed their essential function. Cincinnati Children’s is one of few children’s hospitals in the nation to offer the innovative TPIAT procedure.

The surgery is a new offering for pediatric patients ages 4 and older expecting a life struggling with pain. Fuchs said scientific knowledge of hereditary pancreatitis has expanded through the past decade, although many generations have suffered from a disease associated with belly pain without medical treatment or relief. Inflammation of the pancreas can lead to permanent damage and eventual organ failure. Until recently, doctors have focused on trying, with only limited success, to manage the symptoms of pain caused by the disease through dietary modification and pain management. Because eating triggers the flare-ups, many children diagnosed with the condition become frail and undernourished.

“If that individual’s eating is one of the stimulators of the pain, or the activity of the pancreatitis, then it’s just awful,” Fuchs said of the disease. “It inhibits their ability to take in food because it hurts. So, they can become undernourished. It can be very difficult for these kids, very difficult.”

Walters, who is Mackenzee’s biological aunt and the oldest surviving family member with hereditary pancreatitis, said until Mackenzee’s surgery, members of her family accepted the tragic fate of dying early or living with chronic pain. Mackenzee is part of a long line of family members to inherit pancreatitis, although most of her relatives died early in life from complications related to the disease. Those victims include Mackenzee’s biological mother and an aunt who died at age 35. Mackenzee’s grandmother died at 36 from complications after an experimental procedure. Several of Mackenzee’s cousins also succumbed to the disease, one passing away at age 23 and another at 4 years old. Walters, who is insulin dependent because of damage to her pancreas, expected Mackenzee to have a similar fate or endure severe pain for the remainder of her life.

“Hereditary pancreatitis is pretty much all we’ve ever known in my family,” Kim Walters said. “It’s very excruciating every day. I had my children naturally without an epidural — I would rather have a child every day for the rest of my life than live with this disease.”

In December 2015, after seeing many doctors around the country, Walters consulted with Fuchs at KCH. At the time, Mackenzee was suffering from intractable pain and taking a potentially dangerous level of medications without much relief. After ruling out the possibility of increasing doses of medication, Fuchs recommended Mackenzee as a candidate for the TPIAT surgery at Cincinnati Children’s. He contacted colleagues at Cincinnati Children’s and started the process of referring her for surgery.

Traumatized by losing her mom to an experimental surgery and seeing her daughter suffer in spite of 17 experimental surgeries, Walters was at first skeptical of the operation. Mackenzee was also afraid of undergoing a complex surgery removing an essential organ. But Fuchs, teamed with Dr. Maisam Abu-El-Haija, medical director of the Pancreas Care Center, and Nathan, the surgical director of the Pancreas Care Center at Cincinnati Children’s, explained every detail of the process and provided examples of real cases where children had recovered and enjoyed better lives. While working as a pediatrician in Arkansas, Fuchs recommended several patients for the surgery who, through a prolonged recovery process, experienced substantial improvements in their quality of life. Walters realized going through with the surgery was the only option that might turn around Mackenzee’s negative trajectory.

“I came to the conclusion, if nothing else if she would just be pain-free,” Walters said. “If God chose to take her six months later, at least she would have six months of no pain. And that was our goal; was to make her not have pain and be able to play and do what normal kids do.”

The 12-hour surgery was conducted at Cincinnati Children’s, with general follow-up appointments at KCH. Since her surgery, Mackenzee’s islets have rebounded in producing insulin. In fact, the amount of supplemental insulin she needs each day has dropped, and she no longer requires pain medication for many months following her operation.

“I would predict she has a very high likelihood of becoming insulin independent,” Fuchs said. “She will no longer live in the hospital, which is what these children do before the procedure because they are in so much pain. I anticipate she will get on with her life, including getting into mischief as most kids do when they become teenagers! Hopefully go on to have a productive, full life.”

In fact, the first documented person diagnosed with the condition was an Appalachian. Mackenzee’s family lives in Kenova, West Virginia, but she receives primary gastrointestinal care and pain management services from Fuchs and Dr. Lindsey Ragsdale, a palliative and pain specialist at KCH. The ability to partner with Cincinnati Children’s Pancreas Care Center reduced the amount of travel time for the family, keeping routine health care services more convenient while utilizing the services of a nationally renowned pediatric pancreas and surgery program.

Abu-El-Haija said the success of Mackenzee’s case is the result of like-minded doctors sharing a commitment to improving a child’s condition. The collaboration represented multiple disciplines and experts, including endocrinologists, pain specialists, psychologists, gastroenterologists, and surgeons at Cincinnati Children’s and KCH. She commended Fuchs for initiating conversations with Cincinnati Children’s and pursuing a surgical intervention he believed would achieve the most advantageous outcome for the child, even if not performed at his own institution. She thinks the ability to collaborate with KCH will ensure more hereditary pancreatitis children will receive advanced surgical care without requiring the child’s primary care institution to “reinvent the wheel.”

“It stemmed from having common personalities and common goals,” Abu-El-Haija said. “I really value physicians like Dr. Fuchs. Basically, we both clicked on what we think is important, which is the outcome for the patient. Patients are best served closer to home, but no institution has everything.”

Kim Walters said nothing makes her happier than to see her daughter flipping on trampolines, eating birthday cake and being well enough to sleep over at a friend’s house. Fuchs, who said most children gradually recover from the TPIAT over a prolonged period, considers Mackenzee’s rapid recovery an anomaly. Mackenzee came off a ventilator soon after surgery, and off of the feeding tube for nutritional support five weeks after surgery. She left the hospital prior to the expected discharge date, returning to school to finish the spring semester.

Walters worries less about Mackenzee trying once unthinkable foods to digest, such as steak, or passing out from pain at a friend’s house. The thought of losing Mackenzee doesn’t haunt her anymore. After scouring the nation looking for options for Mackenzee, she found an answer in Fuchs and the providers at KCH and Cincinnati Children’s.

“To discover that it’s right here at your back door where they’ve actually accomplished the research and figured out how to give her a better life and prolong her life, I was a little dumbfounded I guess,” Walters said. “Because everyone thinks living in the boondocks, we don’t have good doctors, but we have some of the best doctors in the world. From Cincinnati to here at UK, there are some of the best doctors.”

Today, Mackenzee radiates with energy and giggles about her second belly button, a token left from her surgery. Mackenzee now thinks about the future and wants to become a fashion designer. She lists off all the activities she can do now, like help her mom cook and mop the floors.

“I can eat. I can go to school,” Mackenzee said. “Now I have more than just one friend. I can do other stuff than just lay in bed all day. Do different things.” 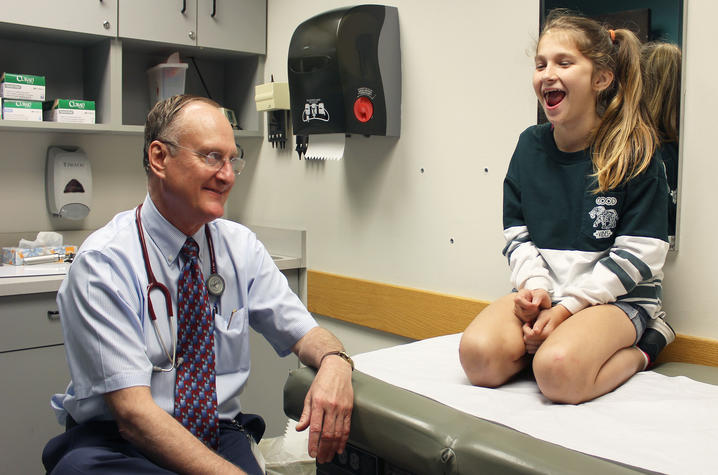 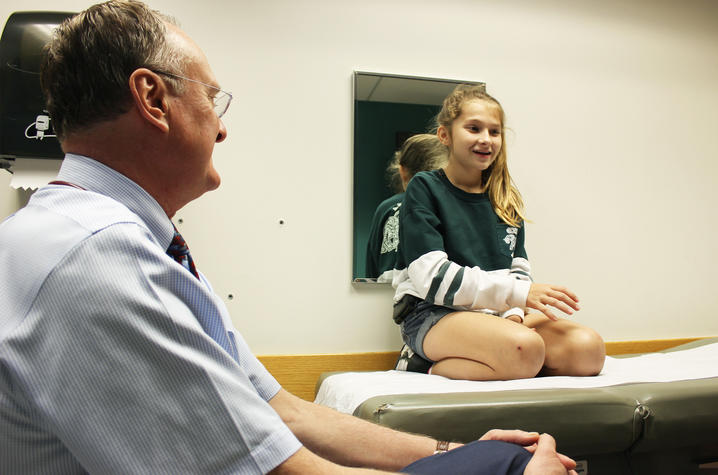