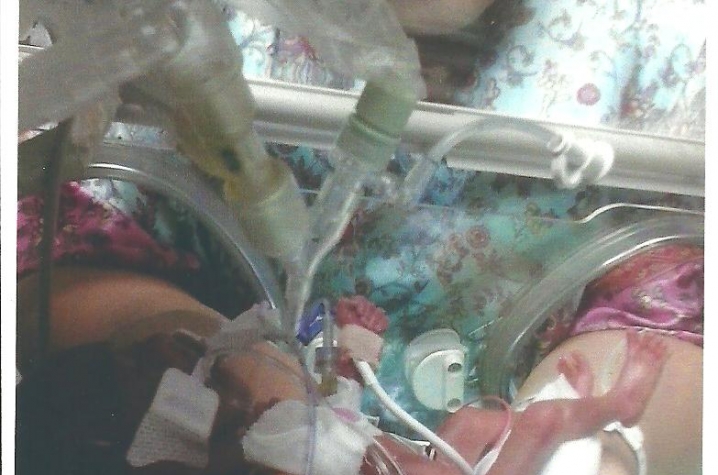 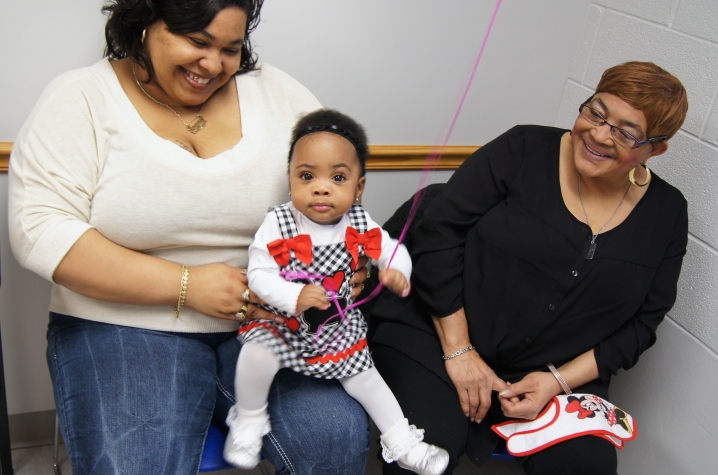 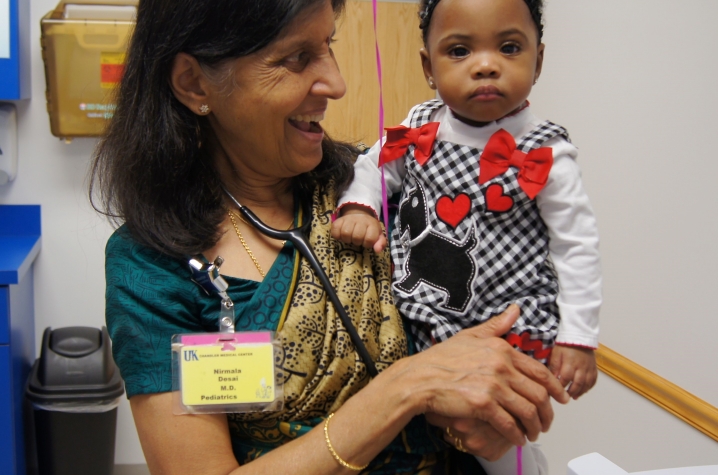 LEXINGTON, Ky. (March 31, 2014) — Arriving about 17 weeks before her due date and weighing less than a pound, Nyla Jo-el Blessing Doyle was given a 10 percent chance of survival.

With an involved parent and follow-up care at the Kentucky Children's Hospital Neonatal Intensive Care Unit (NICU) Graduate Clinic, today the bright-eyed 1-year-old crawls, babbles and pulls herself up. Members of a multidisciplinary team, which includes a doctor, a physical therapist, an occupational therapist, a speech language pathologist, a registered dietician, a social worker and nurses, are encouraged with Nyla's progress in just a year. Still, they will continue to monitor her development for short- and long-term risks associated with premature birth in the months ahead.

"I look at her pictures now and cry just thinking how far she has come," Katherine Bennett, Nyla's mom, said. "She's a fighter — she has unbelievable strength."

Just short of 23 weeks into her pregnancy, Bennett delivered Nyla at the UK HealthCare Chandler Hospital, and Nyla was admitted to the UK NICU March 14, 2013. At 2 months old, Nyla underwent heart surgery for patent ductus arteriosus, or PDA, a common heart condition in premature babies. She came off a ventilator May 30 and received her first bottle of mother's milk in June. Surgeons corrected Nyla's retinopathy, a condition in which the retina of the eyes are sensitive to light, with laser eye surgery in early July. Still breathing with an oxygen tank and attached to a heart monitor, Nyla finally went home in late July. In August, she attended her first appointment at the NICU Graduate Clinic.

Dr. Nirmala Desai, who founded the clinic nearly 40 years ago, said babies born as early as Nyla are at high-risk for developmental delays, which is why it's important they receive follow-up care at the NICU Graduate Clinic located in the Family Care Center at Red Mile Place. NICU graduates are seen in the clinic at the ages of 1 month, 3 months, 6 months, 1 year, 2 years and 3 years. The follow-up appointments give the multidisciplinary team the opportunity to catch developmental disorders and advise parents on how to intervene.

"When babies are premature, they tend to have unique problems," Desai said.

In the first year of development, the team monitors head circumference to check for proper brain growth and body proportions. They also monitor the child's nutrition, asking if the baby has difficulty eating certain types of foods, and motor development. In the second year, Desai said they will look for speech and language development, as well as red flags in behavioral development. The team makes sure the baby is starting to exhibit the ability to think, function and respond.

Another of Desai's roles in the NICU Graduate Clinic is counseling parents on preventive measures and creating healthy environments for children. She provides education regarding immunizations for children and discourages family members' smoking around children. She said the parents have the ability to help reverse the complications of premature birth by simply being involved.

"The biggest predictor of how well these babies do is their parenting," Desai said. "It's the parents' involvement that makes a world of difference, and that's why we encourage participation. We can have a sophisticated NICU — but we cannot substitute Nyla's mom."