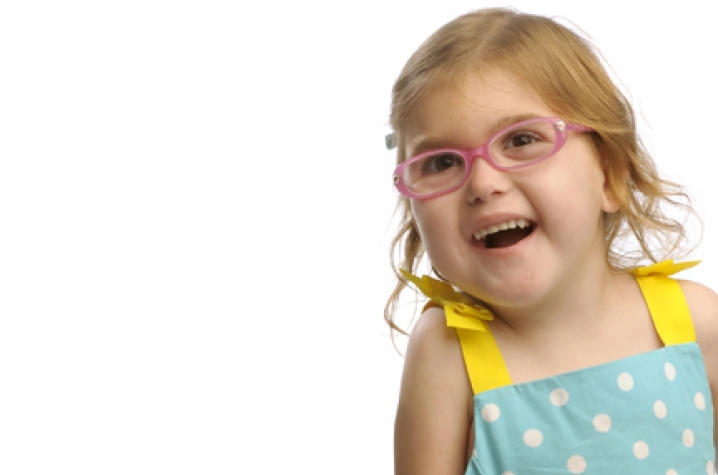 LEXINGTON, Ky. (Feb. 16, 2010) —  Abby Martin is a darling five-year old who lives in Lexington with her parents, Farrah and Michael Martin. Although she was diagnosed with CHARGE syndrome, Abby is full of life and quite animated; very typical for a five-year old.  During their 20-week ultrasound before Abby was born, Farrah and Michael Martin found out that Abby's heart was on the wrong side and they were at high risk. That is when everything went topsy-turvy in their lives.

Immediately after she was born, at 36 weeks' gestation, Abby was transported to Kentucky Children’s Hospital Neonatal Intensive Care Unit (NICU), where she began her series of developmental surgeries. She immediately had heart and stomach surgeries just to keep her alive. She had 25 surgeries within the first two years of her life. When she was born, her esophagus, which normally travels from mouth to stomach, traveled from her windpipe to an unattached ending. This kept her from being able to eat normally and required surgical reconstruction and a feeding tube.

CHARGE syndrome is a complex set of birth defects that occur early in fetal development. Patients like Abby suffer from heart defects, breathing problems, vision and hearing difficulties and delayed physical and sometimes mental development, but it was not until Abby was 40 days old that all of her conditions and needs were combined into the diagnosis of CHARGE. Abby’s mobility has come a long way, and she is proudly walking with some assistance. She does not eat by mouth, but her parents expect that to happen. Abby also has the ability to see and communicate with the help of glasses, hearing aids, and a developing comprehension of sign language.  Abby has been exclusively treated at Kentucky Children’s Hospital for CHARGE Syndrome. The Martins say they place a lot of trust in the doctors and nurses at Kentucky Children’s Hospital.

“That’s how you make it through 25 surgeries,” says Michael Martin.

Anyone who knows the Martin family knows that they have overcome numerous obstacles, some of which they were told were insurmountable. Abby is more mobile than they ever expected. This young girl is an intelligent and strong-willed little fighter. Her parents are very driven as well. When asked how she feels about Kentucky Children's Hospital, Farrah Martin says, “I want to thank you with all my heart. You don’t know how much you mean to us that you were here for us. She’s our little girl and we love her to death and she’s here because you helped her, so we just want to thank you so much.”

Dr. Heinrich Werner, a pediatric critical care specialist, treated Abby until his death in 2007. Werner was a former vice chair and associate professor of pediatrics at the the UK College of Medicine and was medical director of Kentucky Children's Hospital Division of Pediatric Critical Care Medicine.

Many children suffer from one of the many struggles that Abby tolerates daily, but CHARGE syndrome combines multiple disabilities that hinder a small child’s day-to-day activities. This could put a large strain on any family, but Farrah and Michael look at things in a very positive light. With the help of Kentucky Children’s Hospital, they are able to give Abby all the hope in the world.

It is through her piercing brown eyes that you can see the youth, love and happiness that Abby truly encompasses. The aura surrounding Abby and her family is amazing, and it is apparent that she has touched everyone involved in her recovery and rehabilitation process including Kentucky Children’s Hospital surgeons, nurses, doctors, therapists and the entire development staff.

"Abby has a loveable, vibrant personality," said Aimee Baston, manager of annual giving and Children’s Miracle Network at Kentucky Children's Hospital. "Her precious smile radiates from her father’s arms almost every time I see her. Although she cannot communicate verbally, her expressions eloquently convey her thoughts making her impossible to overlook. Her small-framed glasses and fashionable attire sets off that infectious persona which enables 'Miss Abby' to be the spotlight of any occasion."

Abby’s personality in and out of the hospital is one of joy. “Every morning she wakes up happy unless she is sick,” says Michael Martin. “When she’s not smiling we know something is wrong."

Abby is one to go with the flow. When the Martins leave her with a sitter she never cries and is always waving bye. She encompasses multiple strengths. She is a hardheaded kid. She has to be in order to overcome all the obstacles she has endured.

The best characteristic is her happiness. She has no idea how different she is compared to other children. She just walks right up — with the assistance of parents, family or friends —  and acts like any other kid, except non-verbally. She has continued to learn sign language, which enables her to communicate with her family and friends. Her favorite signs are “movie", “Oh no!”, and “computer”. She is a visual learner and cannot get enough of the TV or computer. Her favorite characters right now are Mighty B and Wow Wow Wubbzy. When she is not watching movies, she loves to explore and go for walks. She is also developing a love of cooking.

Watch a video about Abby Martin at www.youtube.com/watch?v=0OMdojhuZb8.

CHARGE syndrome is a recognizable (genetic) pattern of birth defects which occurs in about one in every 9,000-10,000 births worldwide. It is an extremely complex syndrome, involving extensive medical and physical difficulties that differ from child to child.

The vast majority of the time, there is no history of CHARGE syndrome or any other similar conditions in the family. Babies with CHARGE syndrome are often born with life-threatening birth defects, including complex heart defects and breathing problems.

They spend many months in the hospital and undergo many surgeries and other treatments. Swallowing and breathing problems make life difficult even when they come home. Most have hearing loss, vision loss and balance problems, which delay their development and communication.

All are likely to require medical and educational intervention for many years.