LEXINGTON, KY. (Sept. 29, 2014) -- We've strayed far from the Dr. Marcus Welby persona -- in popular television, at least. But even Dr. Gregory House, the irascible main character in the Fox television drama, has moments of compassion.

Chronic pain -- including headaches -- affects more than 36 million Americans.  But the vague nature of symptoms and a lack of patient awareness often inhibit sufferers from seeking help. Furthermore, some doctors aren't completely aware of the full range of pain management options or even that headache pain of unknown origin is a legitimate thing. Sufferers end up limping through life, thinking there's no help for them, maybe even thinking it's all in their head.

Their personal and family lives aren't the only casualties.  One study estimates that migraines cost employers $13 billion in lost productivity each year. Tonya Morgan has first-hand knowledge of that.

The 30-year-old chemist had experienced occasional migraines all through college, but one day in 2011 came a headache that wouldn't go away.

"I couldn't even get out of bed, let alone go to work," Morgan remembers. Her pain was so debilitating that her mother moved to Georgetown from Owen County to help out. They visited many doctors for answers, without relief.

Going from full-time work to having no life at all was emotionally devastating for Morgan. "I was so sensitive to noise that I could lie in my bed and hear my mother down the hall eating potato chips. Going to a restaurant, driving, going to church -- all of those became unbearable. I was miserable."

After 11 one-week stints at the Cleveland Clinic, Morgan was told she required extremely risky brain surgery.  By now she was being prescribed upwards of 30 different types of medicine a day.  "They weren't working," Morgan says flatly.

Instead of the surgery, Morgan ended up seeing Dr. Siddharth Kapoor, director of the Headache Clinic at the Kentucky Neuroscience Institute at UK HealthCare.

"The first thing he said to me was, 'I promise I won't give you any more meds unless we can prove they're working,'" Morgan says.  "I could tell immediately that he cared about me and my pain and would do everything he could to fix it."

Dr. Kapoor and his colleague Dr. Jonathan Smith, spend a lot of time with each patient, learning as much as possible about their headaches and finding the most effective way to alleviate them.  Others echo Morgan's devotion to these physicians  -- their letters of praise are filled with words like "caring," "patient," "empathetic," and "godsend." Many of them say Drs. Kapoor and Smith gave them their personal cell numbers or came in on their lunch breaks to administer a needed treatment. Some of them say they'd never heard of a headache doctor until they met Kapoor and Smith. All of them say they now have their lives back.

"Headache is an extremely complex neurological process, and there usually isn't a quick fix for pain relief," Kapoor says.  "Unless you spend a lot of time with each patient, listening to their problems and asking a lot of questions, it's nearly impossible to find the right way to help them."

In Morgan's case, Kapoor tried several options without success. Nerve blocks helped, but with temporary and decreasing effect. After consultation with other UK physicians, Morgan underwent a procedure called radiofrequency ablation, during which high-frequency electric current is targeted at specific nerves in the brain, destroying the tissue responsible for Morgan's headaches.  She is now headache free.

"Myths about headache abound," Smith says. "For example, the emphasis of diet as a trigger for migraine isn't panning out.  And the theory that migraines are caused by changes in blood vessels in the brain has been debunked."

Smith explains that, historically, the only option for headache relief was symptom management, but new research into understanding headache triggers and the neurological processes involved combined with advances in pain management have leveled the playing field somewhat.

"We can now attack headache on many fronts," says Smith, ticking the options off on his fingers.  "We can try to prevent migraines using existing drugs, such as blood pressure or anti-seizure medicines or antidepressants. Botox, which appears to deactivate the pain fibers in the head, offers potential relief. Nerve blocks are useful for acute treatment. If none of those work, there are other options, like Tonya's ablation."

Furthermore, Smith says, there has been more understanding and acceptance of non-medical treatments for headache, such as biofeedback and acupuncture. In other words, he says, "We've come a long way from 'take two aspirin and call me in the morning.'"

Indeed, UK has come a long way as well, with its headache program considered among the top 20 accredited programs in the country. UK HealthCare's Orofacial Pain program, which complements the services of the Headache Clinic, is one of just 12 accredited programs nationally, and the only one in the entire midwest and south.

"Headache is quite complicated, but because we are a multi-disciplinary program, we can coordinate resources to treat the patient," Kapoor says. "We have a range of treatments available for headache sufferers that is unmatched in this area, including the only orofacial pain clinic in the state. With a combination of the right treatments along with lifestyle changes, it can bring about a significant change in the management of headaches."

Morgan has resumed a normal life, driving, working, and attending Zumba classes. Her mother has moved to a new place close by, and now has some freedom to pursue her own personal interests. Both of them have a new appreciation for their good health, which Morgan "pays it forward" by teaching a health class at her church.

"I want everyone to know that headaches are not a life sentence," she says.  "There is hope if you get to the right person.  I'm living proof of that." 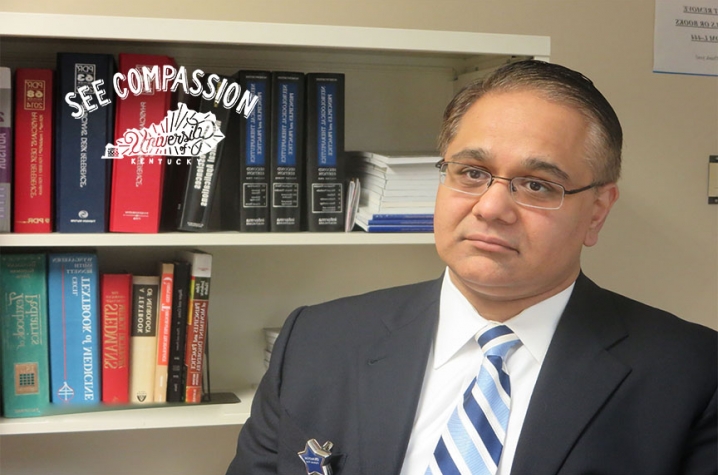