"You have Parkinson's Disease," Dr. John Slevin, neurologist at UK HealthCare who specializes in the disorder, told her.

Greene, just 49 years old, said nothing. She did not even realize the evaluation had begun. She had walked up and down the hall in Slevin's clinic. She touched each finger to her thumb on each hand. She drew spirals on paper.

Parkinson's disease is a disorder of the nervous system that progressively affects movement. The disease develops gradually - in fact, some individuals may have non-motor symptoms as many as 12 years before movement symptoms begin. Tremors are the most well-known sign of Parkinson's. The disorder also commonly causes stiffness or slowing of movement.

There is no cure for Parkinson's disease, but medications can improve symptoms.

All Greene could come up with in her mind were Muhammad Ali and Michael J. Fox. But they were very different from her. Ali was older. Fox had the very prominent swaying movements. It just did not register.

"I want you to go read about it and come back to see me in three months," Slevin told her.

During the three months before she returned to see Slevin, Greene decided to get a second opinion. She went to New York to see Dr. Stanley Fahn, a well-known specialist. This time, she went through two and a half hours of tests. The outcome was the same. Parkinson's disease.

"I told him I wanted to come back to New York to see him every year, but he wanted me to stay with Slevin. He knew Slevin, his work and his reputation. He said my better care would be here at UK HealthCare with him."

When she returned to Slevin, she was slowly beginning to accept what he first told her.

"When you are young and diagnosed with something like Parkinson's, and you're doing everything you are supposed to be doing to be healthy, you just can't connect the dots."

Greene started reading everything she could online. She went to bookstores and glanced through books. Many times, she said, she would wind up in tears.

"I was a maniac," Greene said. "The more I read, the more frightened I was, because the news is pretty startling and bleak. Pictures are typically of people much older. They kept giving a demographic that didn't apply to me. That just kept making me think I really did not have Parkinson's."

Four months after that original diagnosis by Slevin, Greene took the first step outside her home to learn more about this diagnosis. She went to a support class sponsored by The Parkinson's Support Center of Kentuckiana (PSCKY).

"Again, I was seeing people who I didn't identify with. They did not look like me. They were not symptomizing like me. In fact, the educator thought I was a caregiver. Part of that made me feel good, but it also scared me. I thought 'what am I going to look like that seems more commensurate with having the disease.' "

As she continued to learn more from others, Greene said her attitude began to shift.

That platform, along with her faith in God, was the key in changing the direction of Greene's life. She was no longer a person with Parkinson's disease. She was becoming an advocate for herself and for others.

"You hear so many stories where, had the patient known a little more, they could have changed the direction of their life," Greene said. "I'm more of a leader than a follower, so I started trying to meet people more my age who were living really well, and then learning from them."

Once she met one key individual closer to her age living with Parkinson's disease, it started a snowball effect. She began to see that she was not alone.

Out of the more than 600 known movement disorders, Parkinson's is the second most highly diagnosed neurological disease behind Alzheimer's. In fact, Greene said, more people have Parkinson's than have Lou Gehrig's disease (ALS), Multiple Sclerosis and Huntington's disease combined.

This year, it is likely that more than 60,000 people in the United States will be diagnosed with Parkinson's.

Ninety percent of all people with Parkinson's disease may lose their smell between eight and 10 years before motor symptoms begin, Greene said. Other non-motor symptoms may include unexplained depression, unexplained shoulder pain, constipation, blurred vision and depth perception.

Greene not only wants to help those living with Parkinson's, but she hopes to bring awareness to the non-motor symptoms that can be early indications of Parkinson's.

"The benefit of finding out early is that you can get on a medicine regimen and adjust your diet and exercise pattern which may actually slow the progression of the disease," Greene said. "Then, if you start participating in clinical trials, you are becoming part of a community of people who are dedicated to finding a cure for Parkinson's and defining biomarker for diagnosis, which doesn't currently exist."

Greene is dedicated to working out at least 30 minutes each day. "Thirty minutes a day can significantly combat the symptoms caused by the loss of dopamine in my brain," she said. She has also changed what she eats, eating organic and locally-grown foods and foods rich in antioxidants and she pays attention to stress in her life and makes sure she gets enough sleep.

"It's the same message we are told in grade school - exercise, fruits and vegetables, limit your stress, plenty of sleep. These are all actions that can impact disease symptomatology.

"Most people progress slowly," Greene said. "The hallmark of this disease is the slowness of the progression. When you continually remind yourself of that, it lessens the fear and empowers you. I know there are things I can do that will aid in reducing symptom progression. This is what I do now and is what I'm all about - not only for myself, but to pass that message on to everyone I can."

For a year, Greene worked with the PSCKY as an outreach and training educator. There, she established new support groups and led educational programs.

In April of this year, Greene was hired to work with Slevin at UK HealthCare to help patients deal with what she has been living with for the past two years. Slevin's patients have the opportunity to meet with Greene during their clinic visits, and they also have her contact information if the need to reach her at other times.

"I can diagnose patients with Parkinson's disease, but as someone who doesn't live with the disease every day, I can't completely empathize, because I don't have the illness," Slevin said. "That's where Janet comes in."

"I tell them that I have this disease too," Greene said. "Let me share with you - and I want you to share with me - so that we have this synergistic relationship that doesn't just benefit one another, but it's going to help the Parkinson's community as a whole."

Helping others, Greene has discovered, has been therapeutic for her as well.

"For that period of time, even though I'm talking to them about a disease we share, I've completely divorced myself from being one who has it," Greene said. "I'm trying to get them to believe there are things they can do. It doesn't have to be as bad as it may seem."

Greene said she walks away from each patient hoping she has made a difference.

"We receive back what we pour into the lives of others," she said. "I'm energized. I'm restored. And I'm very full of gratitude because of what I get to do. I think it's keeping me well." 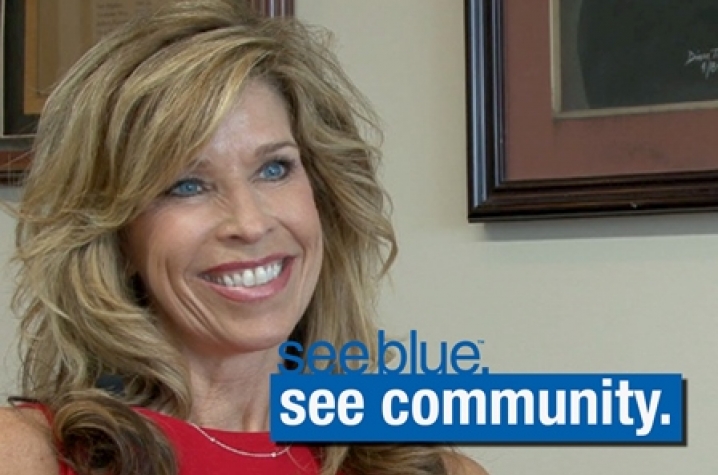